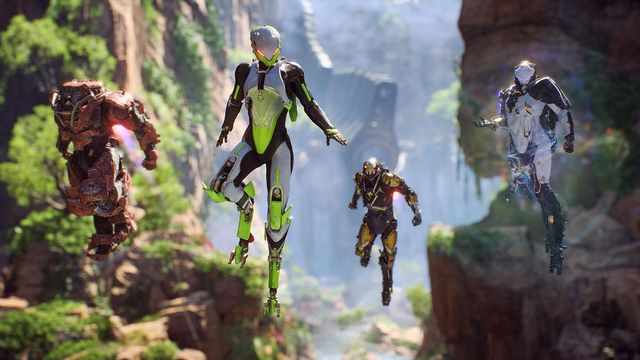 Your abilities in Anthem come from gear called seals, which bind to your shoulder buttons. This is the bread and butter of your abilities, and constantly trying new ones out is the best way to see what suits your playstyle. Primers and Detonators are attached to those seals so it’s important to know what to look for when sifting through the tons of loot you’ll be gathering throughout.

Recognizing Primers and Detonators in Anthem

Primers are going to be your starting move against enemies. It essentially tees up you or someone else to hit the enemies with a Detonator and trigger a combo, but we’ll get into that later.

The loot in Anthem is randomized so all abilities have the chance to drop as a primer or detonator. Primers are marked with a filled in circle inside of a bigger circle. This lets you know this ability will act as a Primer when used.

Below, you can see the ability Venom Spitter has the Primer marked next to it, not all copies of Venom Spitter will have this symbol, so always be sure to double check.

You want to use a Detonator after someone has already used a Primer on an enemy, and this ensures you’ll get a combo. Detonators are also randomized and relatively the same thing as primers, except they need to be used second as opposed to first. Detonators are marked with a four-pronged star symbol, which can be seen below.

Why Combos Are Important

Combos are important because they’re how you and your team will produce the most damage per second possible. Using Primers and then Detonators will trigger a combo, which does extra damage based on a few varying factors.

The amount of damage done with a combo can be amplified by any additional buffs your gear provides. Some gear will give a bonus percentage to combo damage, which can start stacking up quickly. Elemental affinity is another great way to stack extra damage on top of a triggered combo. Learning which enemies are weak what elements are an important part of the combo system.

This is where things get a little complex, so stick with me. Each javelin in Anthem has a unique ability when triggering a combo. However, the ability only triggers if you are the one who hits the enemy with a Detonator.

It doesn’t matter who primed the enemy, Anthem only takes into account whoever detonated and started the combo.

Here are the javelins’ abilities when initiating a combo:

So for instance, the Ranger javelin should be detonating during a boss fight since its combo ability is geared towards single target DPS. This is where team composition comes into play because you’ll want to base your own javelin around the strengths of your team and the task ahead.

If you know you’re going up against a tough boss maybe give yourself two primer abilities so the Ranger on your team will always be able to detonate. You can start to see how these synergize.

That’s everything you need to know about the Primers and Detonators explained and how to get combos in Anthem. For more tips, tricks, and guides be sure to check out our Anthem guide wiki or search for Twinfinite.