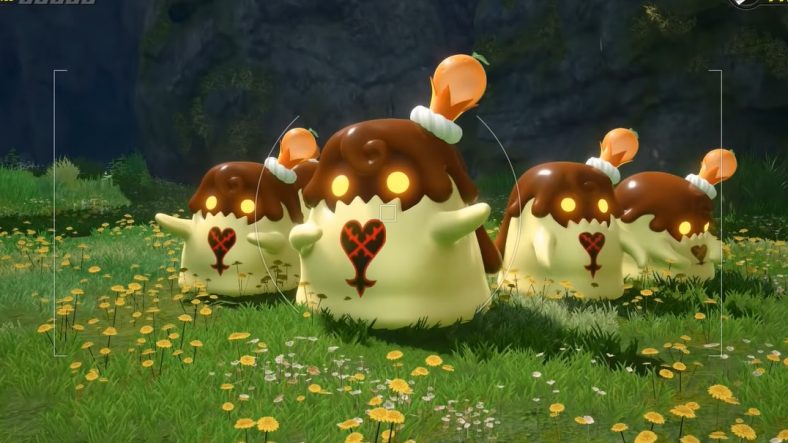 With Kingdom Hearts 3 finally released players have been diving into their favorite Disney worlds to see what’s new. Players may come across something unusual looking, even for Kingdom Hearts. What looks like a piece of fruit sitting atop a pedestal is actually a giant enemy flan that players will have to complete minigames for. Here are all the Flantastic Seven locations in Kingdom Hearts 3.

Each of the major Kingdom Hearts 3 worlds has a giant flan somewhere inside of them. Each will task you with completing a minigame to gain its rewards. Below, we’ve listed all Flantastic Seven locations in Kingdom Hearts 3.

It’s worth noting now, though, that these won’t appear on your first run through of each world. You’ll have to return after completing them the first time for these to appear.

Here, you’ll find a quick summary of the Flantastic Seven locations bullet pointed to give you a quick overview, with their world and closest save point listed. Then, below, you’ll find more detailed explanations, as well as tips on how to beat each Flantastic Seven minigame in Kingdom Hearts 3.

The first Flantastic Seven location in Kingdom Hearts 3 can be found in the Olympus world. When selecting Olympus from the world map make sure to teleport to the second fast travel point in Thebes as this is the closest starting location to the flan.

Once you’ve arrived in Thebes, head up the stairs located behind you and you will be facing the first of the Flantastic Seven. You will be able to see two cherries sitting on a pedestal, go over and hit triangle to interact with it and to begin.

This minigame involves the game sliding through Thebes on Goofy’s shield. You’re trying to hit as man tiny flan as possible to rack up a high score. Be sure to lineup yourself up with them as you soon them coming and it should be an easy victory.

The second Flantastic Seven location in Kingdom Hearts 3 can be found in the Toy Box world. Travel to the Galaxy Toys/Rest Area save point and simply go straight ahead. You will see a strawberry in front of some vending machines, interact with it to begin.

In this minigame, you will be sliding around in the mad tea cups while trying to collect small flan to add to your height. Make sure to avoid the giant flan rolling around on the balls who will try to knock into you and send you flying. Stay around the perimeters of the map and you should be all set.

The third Flantastic Seven location can be found in the Kingdom of Corona world. Travel to The Forest/Hills area save point and head straight through the chasm passed the enemies and the small pond on your right-hand side. Once you pass the lake the blood orange flan will be right there.

This game is a little tricky because it tasks Sora with finding seven Flan around a small portion of the map and photographing them while they pose. Just stay on the outskirts of the area and follow it all the way around to find all seven. None of them are in a tricky spot, but just make sure you grab a photo with all of them before time runs out.

The fourth Flantastic Seven location in Kingdom Hearts 3 is in the Monstropolis world. Head over to the Factory/Basement save point and go through the door in front of you that will lead to the door vault. From there, follow the hallway until you see the wall of doors in front of you.

All the way on the left-hand side is a door that will take you to a new area. Once inside, turn around and go through the archway behind you to find the banana flan.

This might be the most difficult minigame to beat. You have to destroy small flan while avoiding the giant one who is trying to eat you. It’s best to try and hit 2 or 3 flans before dodge rolling away from the big one. Always keep an eye on the big flan as its attack is clearly telegraphed.

The fifth Flantastic Seven location is in Arendelle. Travel to The North Mountain/Mountain Ridge save point and make an immediate left turn and top off the side of the mountain.

Fall all the way down and to the left a little. From the air, you will notice something purple sitting atop a ridge in the middle of an empty clearing. Approach it to find the grape flan.

This minigame is extremely straightforward all you have to do is defeat enough flan in the time limit allotted. One tip for this though is to parry the projectiles they shoot at you because they will be knocked back for an instant kill. If you happen to miss the block dont worry, because you can ride the purple trail they leave behind as a rail which leads you straight to them for a flowmotion attack.

The sixth Flantastic Seven location is in the Caribbean world. Travel to the Port Royal/Fort save point and from there make your first right through the archway. The watermelon flan will be directly in front of you.

This minigame tasks you with defending the for from the flying flan coming towards it. Simply hit the cannon with your keyblade in the corresponding row of the flan to kill it. Be careful because some of the flans will change which row they are in mid-flight so always prioritize the closest ones. You can jump and airslide to get between cannons quicker.

The final Flantastic Seven location in Kingdom Hearts 3 can be found in San Fransokyo. Travel to The City/South District Night save point and turn around to scale the building titled John’s Fashion Center. Once atop this building, you’ll want to airstep your way towards the building with the radio antenna on it.

Once over by the building hop to the rooftop to the right, where the final flan will be waiting for you.

This minigame is about hopping on different flan without hopping on the ones with their mouth open. Every flan can be hopped on once before they open their mouth so keep track of which ones you’ve already been on. once you’ve hit all the flan in an area one of them will have gold sparkles on them signifying you can jump on them one mroe time to launch you to the next area.

After completing each of the Flantastic Seven challenges, you will be rewarded with a special cooking ingredient you cannot obtain anywhere else in the game.

If you manage to beat all of them and get a high score, you will be rewarded with an Orichalcum, which is needed to craft the Ultima weapon and is one of the rarest crafting materials in the game.

One final reward you will receive for completing all seven challenges is the Flanmeister achievement/trophy.

That’s everything you need to know about all Flantastic Seven locations and what your rewards are in Kingdom Hearts 3. For more tips, tricks, and guides be sure to check out our Kingdom Hearts 3 Wiki.