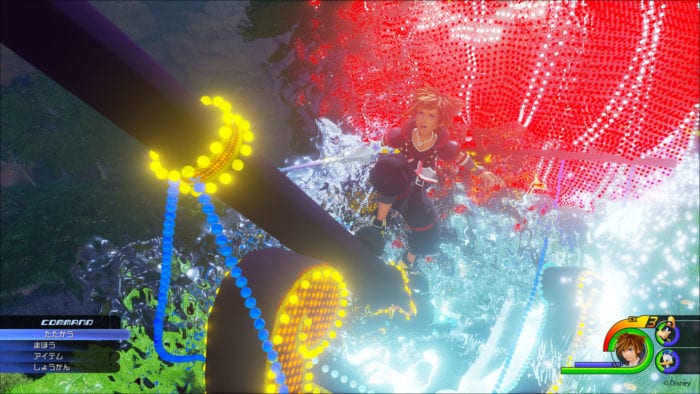 How to Use Attraction Flow in Kingdom Hearts 3

Kingdom Hearts 3 is host to a number of useful new combat mechanics, key among them the new Attraction Flow system. To that end, we’re here with a guide on how to use the Attraction Flow mechanic in combat properly.

Triggering an Attraction Flow will summon Disney rides in as a special attack to damage both the targeted enemy, and those around them, so knowing how to properly activate these Flows is crucial to handling more packed enemy encounters.

Luckily, using Attraction Flow is fairly simple. During combat, green rings will appear around certain enemies after a certain amount of damage has been dealt to them.

Once the ring is visible, focus your attacks on the enemy and a prompt will appear above the command bar with a countdown timer.

The prompt appears in the same place as Keyblade transformations and team attacks, but prompts for Attraction Flow attacks will always appear in blue in Kingdom Hearts 3.

From here, Sora will summon one of several Disney rides to attack enemies with, from the River Rafting ride to the Pirate Ship ride.

Which ride is summoned will depend on the size and layout of the area it is summoned in. For example, executing an Attraction Flow in a wide open area like the Kingdom of Corona’s tower valley will cause the Pirate Ship ride to appear.

Meanwhile, triggering the mechanic in a condensed space like the forest outside of Twilight Town’s mansion will cause the River Rafting ride to manifest.

As such, it’s important to keep an eye on the size of an area while building up this kind of attack on an enemy while playing Kingdom Hearts 3.

Waiting for enemies to close in toward you and your desired target can maximize the damage done by each ride, and otherwise save you from fighting longer than you have to.

Hopefully this makes it a little clearer as to how to use Attraction Flow. For more on Kingdom Hearts 3, check out our wiki for everything you’ll need to know during your play through of the long awaited title.

Question: How do you use Attraction Flow?

Answer: Attack an enemy enough until the (blue) prompt appears to use the move.