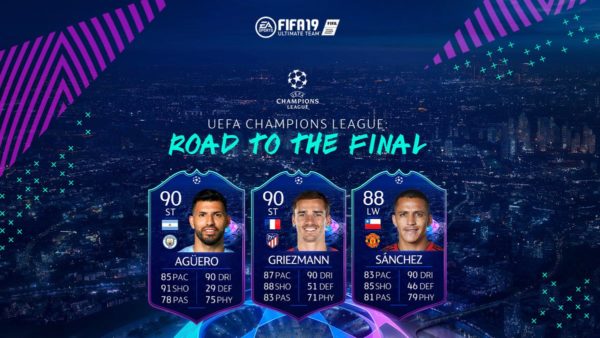 EA revealed a few of the players ahead of the full releases. Those players were:

Rather than upgrading due to their individual performances, the players increase as their team progresses through the rounds of the Champions League. For example, they will be given another upgrade if their team progresses through to the knockout stages, then another if they get into the quarter finals, and so on. The full details can be seen here.

If a team finishes third in their group and enters the Europa League, they will be updated to that competition’s card type, and will continue to get upgrades as they progress.

There is also a Uefa Europa League Jonathan Tah available through Weekly Objectives. You first need to complete the Weekly Objective for him, which requires you to score using a Bundesliga player in 10 separate Rivals wins. You then submit that into a Tah SBC, alongside another simple squad.

Of course, as is usually the case with FIFA 19 promos, the clearest way to get players is from packs. Any gold pack will offer the chance of packing them, but you’ll probably need to open quite a few to do so since they’ll be rare.

Alternatively, you can buy Champions League Road to the Final players from the transfer market. Of course, since they’re upgraded versions of players like Sergio Aguero, you’re going to need a lot of coins. Also, since they all have Champions League cards already that count as Special cards on the market, they might not be that easy to find at a reasonable price.

While there are no SBCs that grant a Champions League Road to the Final player, there are three that are themed around the Promo. They’re all very simple and grant small packs rewards. For example, one requires a Bayern Munich or Chelsea player (to mark their historic final) and two Champions League common players.

We will be sure to update you here if any other SBCs are released.

That’s all there is to know about how to get Champions League Road to the Final Players in FIFA 19. For more tips and tricks on the game, check out our FIFA 19 wiki guide.