Here are the best Marvel video games of all time.

The Marvel superhero franchise has dominated the movie genre for quite some time now, setting world records left and right, alongside receiving mass acclaim from critics and fans alike.

That isn’t enough for them though, as the company is setting up to launch a new initiative soon based in the realm of video games. That initiative will begin with the launch of an unnamed Avengers video game.

But while there’s a lot of anticipation, and mystery, surrounding the title, it is important to remember that Marvel has still made a lot of damn good games well before deciding to invest in the genre even more.

Out of all of the Marvel characters, Spider-Man may be the character that has the most alternate versions of himself, at least when it comes to his suits and outfits. Spider-Man: Shattered Dimensions takes that concept and adds a comic touch.

In the game, players control four different versions of Spider-Man, each of whom came from a different universe in the Marvel Comics multiverse.

The four characters that make up the roster of web-slingers are Amazing Spider-Man, Spider-Man Noir, Spider-Man 2099, and Ultimate Spider-Man. These alternate reality doppelgangers are tasked with working together so that they can bring each of their realities back into balance.

This storyline is unlike any that has occurred in previous games in the series, or any other Marvel games for that matter, a factor that helped it stand out as unique.

Alongside distinct suits for each character, abilities also differed depending upon who you control. Where one Spider-Man focuses heavily on acrobatic moves, another is stealth oriented.

This style of gameplay makes for an interesting bit of variety and was definitely ahead of its time with the mechanic.

Anyone who has ever digested any bit of source material related to the Hulk has likely imagined what it would be like to be able to deal out the type of destruction and mayhem he is able to.

The Incredible Hulk: Ultimate Destruction does a damn good job of condensing that feeling into a game, creating the ultimate power fantasy as a result.

While the plot is pretty straightforward for a Hulk-based storyline, featuring well-known enemies like Abomination, Devil Hulk, and Thunderbolt Ross, gameplay is where Ultimate Destruction truly shines.

As the name suggests, plenty of destruction gets dealt out when playing as Hulk. Shrug off gunfire, toss around enemies, and pluck helicopters out of the sky, wreaking havoc all the while.

One of the best aspects of the game is the boss fights. In order to make things challenging, boss fights introduce powerful enemies to fight Hulk.

More often than not, these enemies are either ridiculously strong or are the size of buildings. These fights always made Ultimate Destruction feel like a spectacle, especially in terms of scale.

The majority of characters that make up Marvel’s heroes tend to have similar mindsets when it comes to violence, always seeing it as a last resort. The Punisher is not one of those characters.

As such, the 2005 action game isn’t like any of the other superhero game of its time. Instead, it fits in well with the rise of gritty titles in the genre.

Since The Punisher doesn’t work within the bounds of morality, its gameplay has a lot of unique mechanics. While the long list of weapons kept shootouts from being repetitive, the numerous interrogations are the best part of the game.

Whenever players come upon an environment hotspot, different interrogation methods can be used in order to coerce or kill enemies.

Though it may be too much for some, the feature really results in memorable gameplay.

X-Men Origins: Wolverine is one of the rare movie tie-in games that not only managed to be better than the movie, but also could exist as a standalone game simply because of how good it is.

Like the movie, the game tasks players with tracking down the man who kidnapped Wolverine’s girlfriend, alongside imprisoning mutants on an island.

That is where the similarities end though, as X-Men Origins: Wolverine focuses far more on the violent ways Logan is able to kill people, definitely surpassing a PG-13 rating.

In a fashion similar to Devil May Cry, Origins features fluid hack and slack gameplay, as well as a combo meter to build up special moves.

It is easily the best Wolverine-focused game Marvel has ever created, largely in part to how it encapsulates the rage and violence he is known for in the comics.

X-Men Legends II: Rise of Apocalypse is criminally underrated. Developed by Raven Software for multiple platforms back in 2005, this action RPG is home to some of the best co-op gameplay of any of the Marvel titles.

The game sees the X-Men team up with the Brotherhood of Mutants in order to stop the supervillain known as Apocalypse. The combination of the two Marvel teams gives players access to their favorite X-Men, as well as also to lesser-known characters like Toad and Sunfire.

Depending on the platform, X-Men Legends II: Rise of Apocalypse has a roster of over 15 different characters to choose from for a four-man team.

The inclusion of online play is really what sets this game apart from other titles in the same era, as it was one of the few games that supported the ability to play with friends over the internet at the time.

Lego games can only be played by kids right? Wrong. Lego Marvel Super Heroes proves that fact with fun gameplay, a clever story, and a huge roster of players to cycle through.

In total, players can unlock and control 180 characters, each featuring the abilities they are known for. The game has a sizeable open world to run around in with those characters, as well as plenty of enjoyable missions.

Throughout the 15 main story missions and 12 side mission, you interact with plenty of the series’ best villains, including Whiplash, Abomination, Magneto, Sabretooth, Red Skull, Carnage and many more.

It’s rare that you are able to see so many characters from the Marvel universe interacting with each other. This feat only adds to the distinct ambiance that only a Lego Marvel based game can contain, especially since the writing is pretty darn good in this one.

Never before had players been able to explore an entire city with such freedom as they could in Spider-Man 2. Not only is it the first time that a video game really makes you feel like a superhero, it is one of the first ones that has an interesting open world to explore.

Taking place two years after the original PS1 title, Spider-Man 2 follows a similar comic-inspired storyline. But while saving Mary Jane and defeating Doc Ock is enjoyable, the true fun in the game is found via the random occurrences that take place throughout it.

While you are web-slinging through Manhattan, crimes and emergencies occur at almost every moment, just like in real life. These small-time events are just as important as the main ones in the game for building skills.

To this day, Spider-Man 2 also still has some of the best traversal features in any Marvel title. Alongside innovative speed and momentum-based swinging the game allows you to connect webs between buildings.

While it may seem like a no braining in hindsight, half the Spider-Man games don’t even have that gameplay feature. Couple this with the open world and you can see why the game is so beloved. 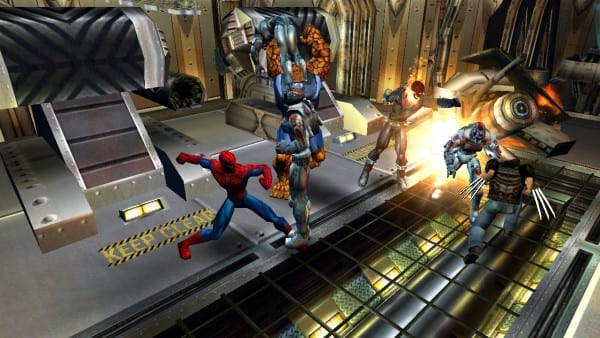 The action-RPG is a rare breed for Marvel video games. Yet, Marvel: Ultimate Alliance is proof that, not only could the concept work, but that people love being able to play all of their favorite characters with their friends.

With 22 playable characters at their fingertips, Ultimate Alliance allowed players to either swap between four different AI-controlled characters or play co-op with up to three friends.

These characters could be swapped in and out at almost anytime, resulting in a lot of unique four-man teams. Distinct dialogue, abilities, and story prompts were attached to each one, making for an assorted experience.

The main storyline, while nothing to write home about, is an impressive feat, thanks in part to the huge cast of characters it boasted. Alongside the 22 playable characters, over 140 characters appear in the game’s main story.

You’ll be hard pressed to find any other Marvel game, let alone superhero game, that gives even the most obscure of characters their 15-minutes of fame.

A cross-over video game is always a special occasion, as they feel like fan-fiction turned reality. Combine that with the fact that this particular title is a great fighting game and you can see why Ultimate Marvel vs. Capcom 3 holds such a special place in many fans’ hearts.

Instead of simply featuring one on one combat, this fighter lets players tag characters in and out of the match accordingly throughout a 3 v 3 knockout brawl. Once a player is KO’d, the next one on the team jumps into battle.

With an impressive roster of 48 characters, combined from both franchises, the game has plenty of different team setups to choose from.

Nonetheless, the improvements it makes to the aerial combat and X-Factor systems and the pre-existing combat system from Two Worlds help make it the best game in all of the series. Even gamers who don’t like fighting genre games should give Ultimate Marvel vs. Capcom 3.

Flying around the New York landscape is fluid, fast, and fun. You can easily spend all day swinging around the city, never even doing anything relevant to objectives, all the while still having a blast.

Once players do dive into the story, the game presents you with one of the more straightforward Spider-Man narratives created. It doesn’t reinvent the wheel, but the plot of Marvel’s Spider-Man has just the right mix of conflict and fun.

While many people complain that Marvel’s Spider-Man’s combat is far too similar to DC’s Arkham series, it’s really just another case of the game taking a great mechanic and perfecting it.

Building up the focus meter in order to fire off a special attack, dodging villains with Spidey sense, and the myriad of other combat-oriented skills really do make players feel like they are Spider-Man.

Even though it’s the most recent, it’s already one of the best Marvel games.

That does it for the best Marvel video games of all time! Here’s another list, if you’re interested: Top 10 Best Superhero Games of All Time