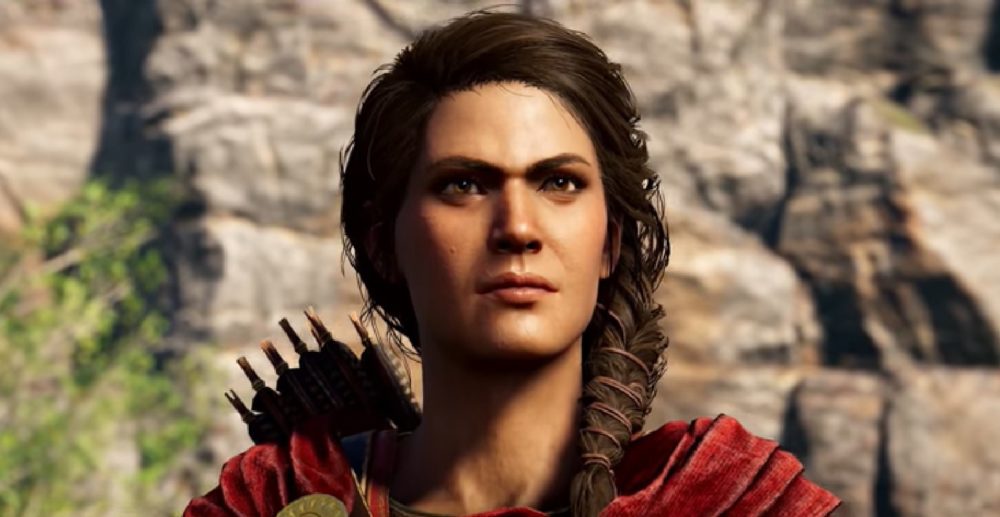 For the first time ever, Assassin’s Creed is allowing players to romance characters in the world. During the seven hours I spent recently with Assassin’s Creed Odyssey, across its first two areas, I came across a woman I was able to romance. While it ended with surprising results, the act of romancing was not only simple, but cheesy as well. Here’s how it went.

As I made my way into the second area players will go to in Assassin’s Creed Odyssey, I spotted a side quest symbol. Upon my arrival, I was immediately greeted by a woman who complimented my looks. I had the option to flirt back (signified by the heart symbol to the left of the option) so naturally, I did. I could have also chosen to basically ignore this gesture or inquire further into the actual quest, but I was there for love. Kassandra quickly made a move to take this woman to bed, but it was just-as-quickly denied. Before taking her to bed, Kassandra would have to complete a task: gather some medicinal herbs.

I did as she asked and upon my return with the herbs, more flirtation occurred. Again, I chose the dialogue options with the hearts next to them — I could have changed course, choosing to deny this flirtation or just continued by asking strictly about the quest. This time, though, the flirtation took a very forward and cheesy turn. The woman I was speaking to mentioned something about pain and the option I chose to respond with saw Kassandra mentioning that she likes pain (I cringed). The conversation continued and so did the cheesiness. I won’t go into too much detail, but Kassandra explained how great she was at keeping her finger on the point. Wink, Wink. Again, though, I was given a task to complete before I could move any further.

This time, I had to take out some people that wanted my would-be girlfriend and her family dead so that they could take her land. I killed these people and finally, my time had come. I chose one more dialogue option with a heart next to it, although I could have chosen to simply collect my reward and move on, and the two characters began to kiss. Kassandra picked her love up, carried her inside and the screen went black. A few moments later, the two women were shown exiting the room.

I assumed this was the end of my romantic adventures with this girl, but instead, I was pleasantly surprised to find that she would join my naval crew as a rare (purple) lieutenant, which means not only will she provide helpful stat adjustments to my naval abilities, but when I board enemy ships, she’ll be fighting right beside me. I replaced my common rarity lieutenant with my new rare girlfriend and found that she came with significantly better stats than my previous lieutenant, stats such as increased ramming damage and more that would make my seafaring easier.

While romance is a welcome addition to the Assassin’s Creed universe, and it does add to the overall RPG direction the game has transitioned into, it’s still simple and the flirtation never felt fully genuine, often coming off as cheesy and comedic more than anything else. This was just one example of the romance in Assassin’s Creed Odyssey — sometimes it’s romantic, sometimes it’s just sexual — so it’s possible future romantic attempts play out more realistically. We’ll be able to see the full romance options when Assassin’s Creed Odyssey releases on Oct. 5.