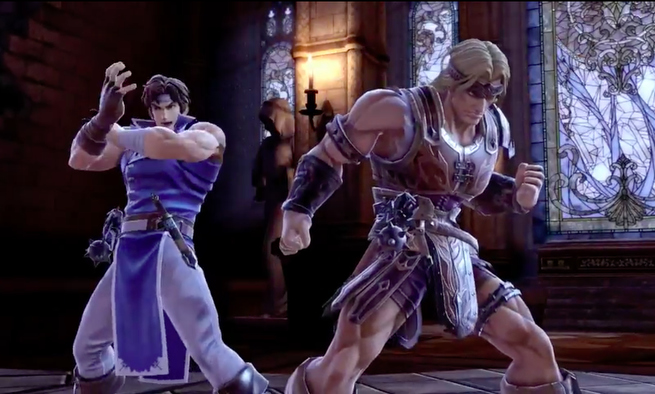 Earlier this morning, Nintendo held a Nintendo Direct solely focusing on the upcoming Super Smash Bros. Ultimate for the Switch. They announced some new characters, stages, items, features, and tons of other rad stuff to look forward to this coming December. But the biggest revelation to come out of this presentation was the inclusion of not one but two playable characters from the Castlevania series: Simon Belmont and Richter (who acts as an echo fighter for Simon). Even Alucard, the son of Dracula, plays a part in the brawler as a new assist trophy; there’s even a brand-new stage based off of Dracula’s Castle being added to Smash Ultimate as well.

With all of these Castlevania-related additions to Smash Bros., one would think that a new Castlevania game is on the way, right? Sadly, that’s not quite the case, but between the returning Castlevania Netflix series soon to arrive and these latest Smash announcements we think it might just be the perfect time for the iconic series to return, and Nintendo Switch would surely be the perfect home.

As far as content goes, it’s also a great fit. We’ve gotten a few retro-styled Metroid-Vania type games on the Switch, but none that are actually Metroid or Castlevania. Nintendo just recently released a 2D Metroid on the 3DS last year, so another Metroid game in the fashion on the Switch is likely not happening anytime soon, especially with Metroid Prime 4 currently in development. A reimagined Castlevania game built from the ground up for the Nintendo Switch exclusively would be a massive win for both involved parties: Nintendo gets a sweet new exclusive, and Konami, still struggling for direction after the calamity that was Metal Gear Survive needs a PR boost and a return to the exemplary content it was once known for.

The 3D Castlevania titles were never highly received but the 2D ones, especially the fan-favorite Symphony of the Night, is remembered as a seminal game. Konami would just have to develop something that echoes the spirit of the classics and fans would go wild for it. Castlevania is pretty big at the moment, and once Smash Bros. players get their hands on Simon and Richter, I’m sure they would become curious as to what game series they came from and would surely appreciate a new title in the series for the Switch.

For example, I am someone who would be more than ready to plop down cash for a new Castlevania game, and to tell you the truth, I’ve never even beaten one Castlevania game before, but since I’ve been introduced to the deep lore that the series has to offer thanks to the brilliant Netflix animated adaptation, I’m all in. I’m ready for a new game, or even just a reimagined port of Symphony of the Night, just to whet my appetite until we get a brand-new entry.

Anyways, it’s still insane to me that this new Smash Bros. game is getting so much Castlevania content when other well-known Nintendo characters are still left out of the loop, like um… *cough* Waluigi *cough*. My body is telling me that something must be in the works between Konami and Nintendo because we haven’t even had a Castlevania game on a Nintendo platform since the lackluster Mirror of Fate on 3DS. But now, Castlevania is in a very good place to release a new title, it only makes sense Konami! Come on and give the Switch an awesome third-party exclusive!