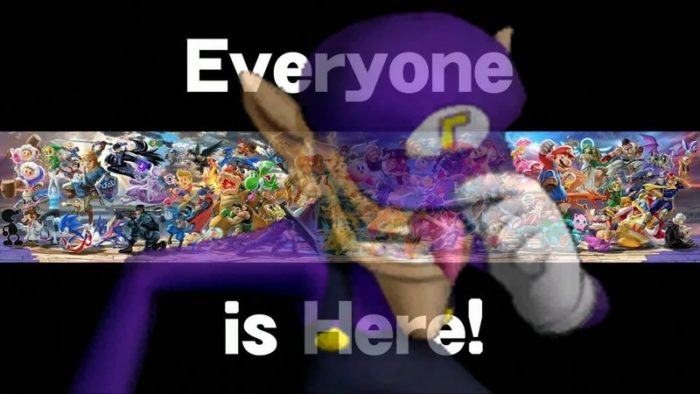 So, Super Smash Bros. Ultimate was just announced at the Nintendo E3 2018 conference and it has everyone in the game. By everyone, we mean all of the fighters that have made their way into the series thus far, such as the Ice Climbers, Bayonetta, Snake, and even Pichu. That doesn’t mean to say, however, that we haven’t gotten any new characters, as Super Smash Bros. Ultimate director Masahiro Sakurai revealed Daisy, who turned out to be a copy of Peach, and Ridley to the fray. While these two additions are certainly fan-favorite characters, the internet just can’t seem to let go of the notable absence of another character: Waluigi.

Waluigi’s been around since 2000, debuting in Mario Tennis 64. He mainly acts as a foil to Luigi, like how Wario is the evil Mario, and has mostly only appeared in sports spin-offs. For whatever reason god knows why, Waluigi has picked up a huge following and fanbase over the recent years, spawning countless memes and jokes in the Mario fandom. On top of all these things, Nintendo fans have been notably vocal about wanting a playable Waluigi in Super Smash Bros. Ultimate, despite him already being an assist trophy in the game.

This guy’s become so huge to the point where he’s become the next “Ridley” of Smash since people had been practically begging Sakurai to make the purple dinosaur a playable character before Super Smash Bros. Ultimate. At the end of it all, the internet went absolutely bonkers after seeing Waluigi as an assist trophy, and then responded in kind with, well, memes.

waluigi after the smash announcement pic.twitter.com/fYM8BEY7dR

New Sakurai picture! (6/14/2018) "Pic of the day. Once again, Waluigi's Assist Trophy joins the collection!! …Which also means he's not a playable character. Just because you try hard doesn't mean you'll make it into the battle." pic.twitter.com/m9vNeWZeHV

[SSBU] Everyone is here, but where is our guy Waluigi? from gaming

Nintendo: Who do you guys want in Smash?

Entire Crowd: WALUIGI PLEASE ADD HIM DO IT

Nintendo: What? We can't hear you

Well at least we finally have an official reason why Waluigi isnt in Smash Ultimate. 🙁 pic.twitter.com/Hm4VdFOAIc

We need Waluigi from gaming

anyone trying to speak to me for the rest of the week: "How are y–"
me: "Waluigi was robbed and humiliated"

This is an insult to us Waluigi fans from smashbros

Super Smash Bros. Ultimate isn’t enough – they want Waluigi in Fortnite, too. Where is the justice for Nintendo’s purple madman?

Waluigi is the most repressed character in video games to date. He is barely in SSB Ultimate, and he doesn't have his own game. The least that anyone could do for him is give him a spot in Fortnite, a spot which he so rig #ThingsNeverSaidInIndianaJones

Add Waluigi to Fortnite (Found on r/copypasta) from FortNiteBR

For those if you upset about Waluigi not being in Smash.

So to sum up this smash-tastrophe of a scandal, everyone is heartbroken and just wants Waluigi to get his rightful place in the spotlight… and roster. But like what that one tweet mentioned, if Fortnite added in the Orange Justice dance, maybe Sakurai might just turn things around and add Waluigi into Super Smash Bros. Ultimate, right?

Who are we kidding?

If you really want a playable Waluigi, Mario Tennis Aces is coming up later this month for the Switch. Enjoy all the tennis goodness with the purple king of memes, and don’t worry, you’ll still see him in Super Smash Bros. Ultimate.

For more internet reactions, check out what the rest of the world thought about Snake’s butt loss and the E3 2018 conferences for Microsoft, Sony, and Nintendo.