Learn to Spot the Real Players From the Bots 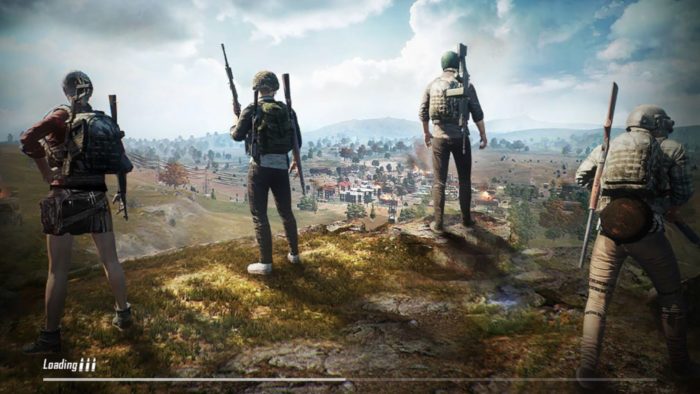 One of the major differences between PC and mobile versions of PUBG is the fact that the mobile one is heavily populated with bots from the outset. It seems that as you level up, fewer bots are introduced into each match, but at lower levels you’re going to come across them more often than real players. This makes being able to distinguish between the two a very useful skill indeed, as it allows you to approach each encounter differently. Bots are absolute morons at low levels, but are also weirdly good shots at times. You can usually spot one by the way they repeat movements and actively seem to seek you out. They’ll strafe back and forth methodically,usually freeze in place when spotted, and can almost always be found swimming aimlessly in the water. Use these lower level bots as an advantage to grab some new gear, as they often spawn with it, so can give you the advantage early on.

Give the Motion-Controls a Shot 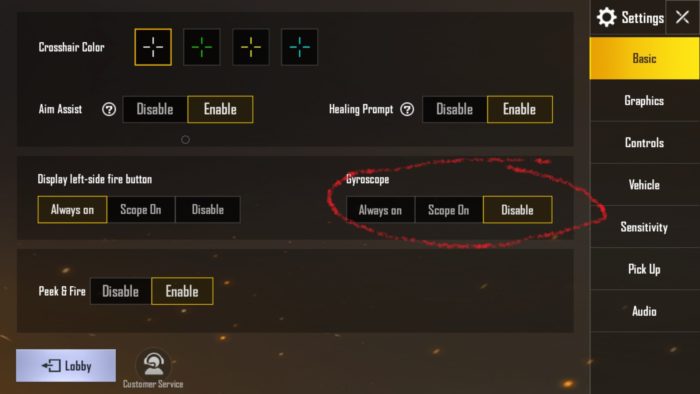 PUBG Mobile is definitely an impressive recreation of the main game. The key area where it is dragged down by being confined to a mobile device is in its controls, specifically the shooting. However you cut it, touchscreen shooting is always pretty awful. It’s inaccurate, woefully finicky and is probably going to be the main reason why you just lost a firefight. This is why you’re going to want to at least try the game’s motion controls.

You can switch the aiming to the gyroscopic control scheme in the settings menu, by clicking on the cog icon in the top right. Aiming down the sights in particular, is hugely improved by doing so, allowing you to have more control over landing those long-range shots. Ultimately, it’s going to come down to personal preference, but given how hit or miss the touchscreen controls are, it’s definitely a safe bet.

Know When to Loot Manually 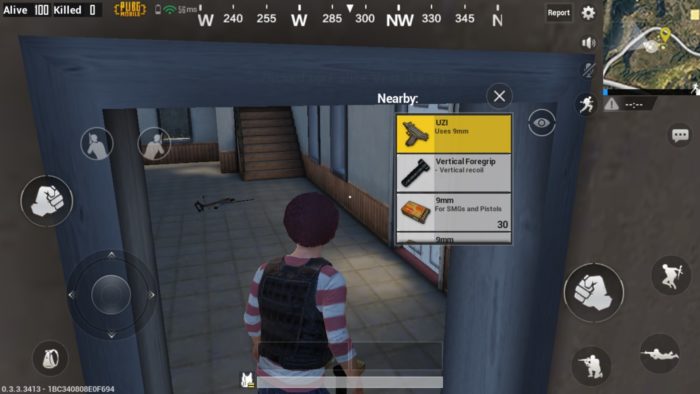 PUBG Mobile is an inherently speedier affair, well-suited to the pick up and play nature of mobile gaming. One mechanic which goes a long way to making the game feel faster is the auto-loot system. Running over to a bundle of items will automatically select and equip the best ones, highlighting them in yellow. This also applies to all med kits, scopes and attachments, but while it is undoubtedly a cool feature, it’s not always the best call. Especially late game, you’re going to want to think about your specific loadout a bit more, swapping scopes and picking up a surplus of ammo if needed.

The game will automatically decide when you’ve got enough first aid items, but you’re gonna want to make that call yourself at times. The inventory management screen is also surprisingly easy to navigate thanks to the touch controls, so taking a moment to personally curate your inventory could be the difference between a chicken dinner and a bullet to the back of the skull. 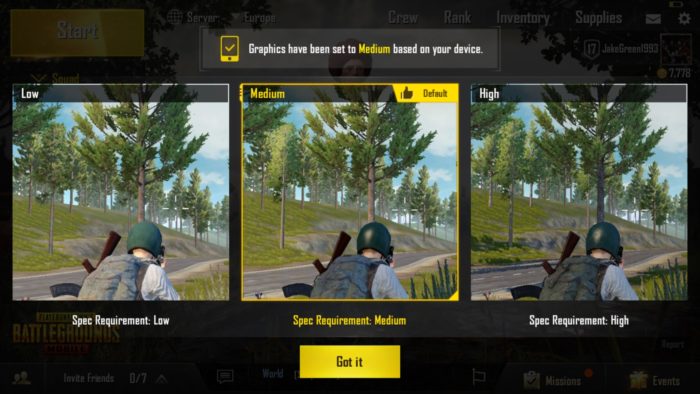 There’s no denying that PUBG on mobile is a serious technical achievement, often running even more smoothly than it does on Xbox One. And while it looks great by mobile game standards, it is still exactly that, a mobile game. This means that draw-distance is incredibly patchy, making it hard to tell foliage from foe. The key to winning any battle is turning the limitations into advantages, and here is no exception.

Lay down in tall grass and you’ll be rendered pretty much invisible, and come to terms with the fact that you can get a lot closer to your enemies without being spotted than on PC. Camouflage also plays an even bigger role this time around, meaning you should go for dark greens and blacks over more flashy, fun attire. Overall, PUBG Mobile allows you to take more risks as you’re less likely to be picked off at a distance. You’ll have to change your entire playstyle to succeed on mobile, something which is going to take time and experimentation.

In what I suspect was a move to compensate for the low visual fidelity, PUBG mobile actually alerts the player to nearby gunshots and footsteps on the map. These appear as red icons on the map, and are surprisingly useful and generous. Be aware though, that these new systems apply to your gunshots and footsteps too, making it even more important to crouch when you move and pick your shots wisely. The footsteps indicator can be used to establish which buildings contain enemies, allowing you to either engage or steer clear. Players can now hunt each other down more efficiently, another reason for the game’s increased pace. 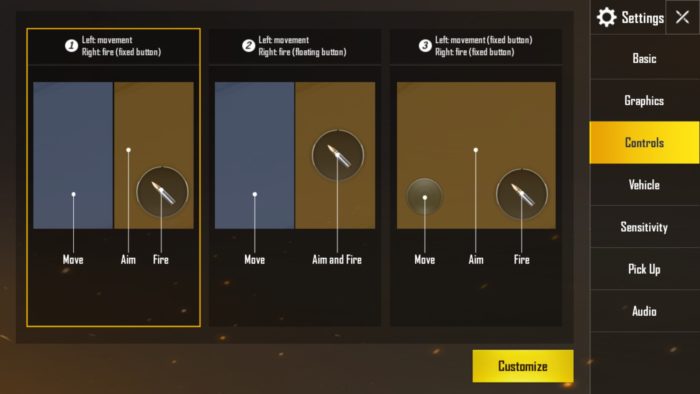 The controls in PUBG Mobile are serviceable at best, comprised of crowded on-screen buttons which often lead to accidental firing and unwanted vaulting. You can make things a little better though by heading into the control settings located in the top right corner of the screen. Here, you can choose between three options which vary the size and positions of each icon. Whichever you choose, it’s never going to be perfect, but maybe you can find one which gives you an edge over your opponent. 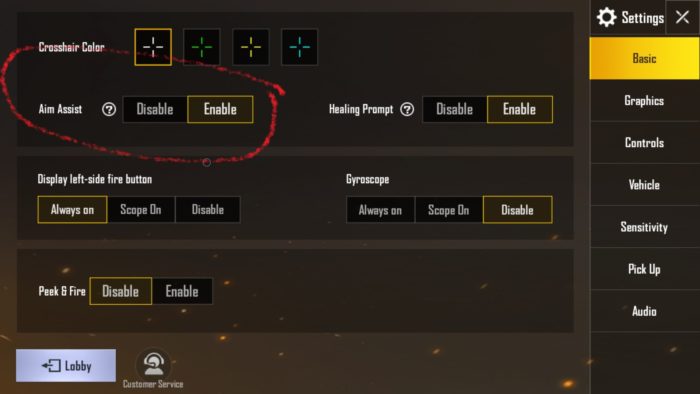 There’s an argument that aim-assist is cheating a little bit but seriously let’s all get off our high horses for a second and acknowledge that this is PUBG on mobile and is an inherently more casual experience. Not to mention the fact that every player is seriously hindered by the jankyness of the touch controls, meaning that aim assist is definitely an okay allowance to be made. Aim assist is pretty generous here, but not too much to interfere with your more natural shots. It all comes down to preference, but there’s no doubting that the aim assist makes the close-quarters combat in particular a lot less daunting. It can be difficult to move and shoot at the same time so switching on this option definitely spices up the action a little bit. At the end of the day though, I don’t think anyone is going to call you out for using it here. 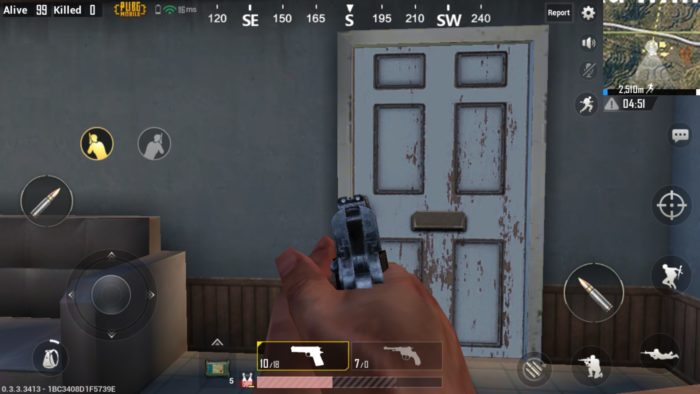 One of the stranger design choices which PUBG makes is that it switches off leaning by default. This is probably to free up space on the screen or maybe to make the game easier to understand for newcomers but make no mistake, you absolutely need to switch it on. To do so, go into the settings menu, indicated by the cog icon in the top right of the screen. Once it’s on, you’ll be able to peak around corners and out of bushes, giving you a serious advantage. You can bet your bottom dollar that the final ten players in every game have leaning turned on so you should too. 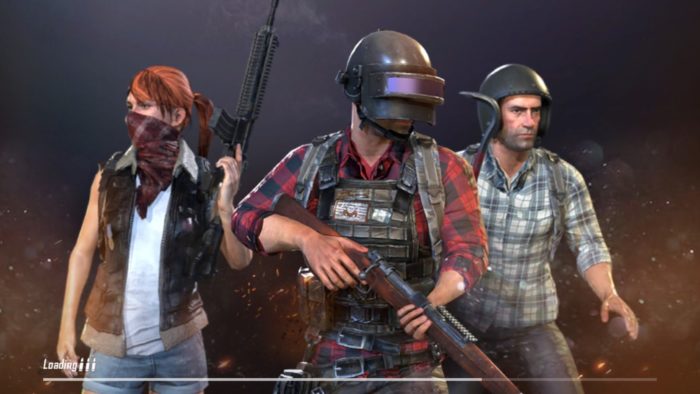 A lot of the tips we’ve outlined thus far lend themselves to the faster play style which PUBG Mobile cultivates. Players die faster, games are quicker and people take more chances. PUBG mobile is a more casual experience where the stakes are lower than on it’s PC namesake, meaning that you’ll have to adapt to win. What we’ve found is that PUBG mobile favors a more aggressive play style, in which bold moves and actively hunting other players is key to success.

This is due to the fact that everyone is slightly less confident than they’d like, due to the tricky controls. Rushing and flanking an enemy is a sure way to get them panicked, and firing as many bullets as possible can forgo the patchy aiming accuracy. That’s not to say that you shouldn’t sneak around, more that you should aim to take more chances and at least give the impression that you are more daring than you are. Drop into the school area, rush enemies and be generous with your grenades, because in PUBG mobile, who dares wins.

Learn When to Switch to Auto-Sprint 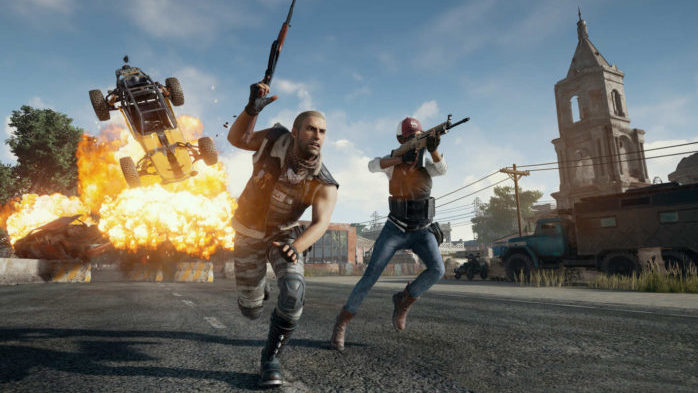 With the screen being as busy as it is in PUBG, any way you can free up some space is seriously valuable. One such option is the game’s auto sprint mode, which allows you to take your hand off of the left side of the screen and use it to scope out the environment. To do this, flick the sprint stick upwards until an icon appears. Pull your thumb up to the icon, which will in turn lock sprinting in place. This can be done when crouched and in prone, and is a great way to make spotting enemies easier while running.