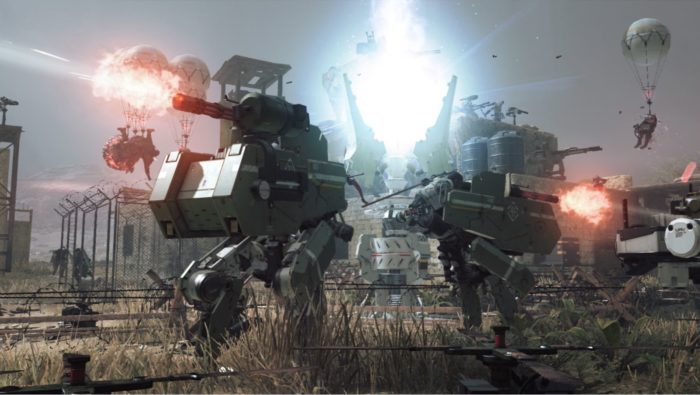 Despite what a lot of passionate series fans have to say about Metal Gear Survive, the latest single-player campaign trailer is beginning to prove that this game might have more potential than we initially thought. While we’re not exactly thrilled with the always online requirement even for playing the campaign, the game’s mechanics look deep and complex enough that we might actually be won over just by the prospect of pure fun alone.

The trailer gave us our first extended look at the single-player campaign, and contrary to the zombie-blaster survival game we feared it might be, Survive apparently does employ plenty of the stealth mechanics that are true to Metal Gear’s roots. While most of our enemies seem to be brain-dead zombies, there will still be stealth sections that require players to sneak up on foes and attack them from behind. The story itself is certainly more involved than previously expected as well. According to Metal Gear Informer, the story kicks off when a wormhole appears over Mother Base right after Big Boss’ escape. The player character almost gets sucked into the wormhole but wakes up a few months later in a top secret government sector. Here, they’re told that they have to venture into the wormhole to rescue their comrades who were pulled in, while also searching for a cure for a mysterious infection.

So still pretty thin, then, but compared to our prior assumptions about the story just being a case of MSF vs. zombies, we’re happy to see it’s much more substantial. Not to mention the fact that Metal Gear Survive still retains some of its Metal Gear quirkiness, as seen in the naming of the Wardenclyffe section instructor Goodluck. When you’ve had past villains with names like Hot Coldman, it really doesn’t get anymore Metal Gear than that.

On the multiplayer side of things, Metal Gear Survive is looking even better. I already knew the game was going to be fun when I previewed it at E3 last year, but a second look at the game’s crafting and combat components solidified that opinion. Aside from just pitting groups of players against a horde of zombies while protecting a generator, there’s a whole crafting system that comes into play, along with the ability to make use of the environment to snag a few kills. Fences aren’t built just for objective protection, they can also be used to trap zombies and give players the opportunity to spear them to death when you’re low on ammo.

We already knew that Metal Gear Survive would be adapting the combat system from The Phantom Pain, but the game is doing a bit more than just that by expanding upon the system and giving players more options in how they want to approach hostile situations. Couple that with what looks to be a pretty solid online multiplayer mode, and this could very well end up being the best iteration of Metal Gear Online yet.

Despite MGSV enjoying high sales and being released to positive reception the online portion of the game felt severely underrated. MGO did a lot of things right, including a detailed character creator, a good selection of game modes, and the ability to use Walker Gears. But, in all of its past iterations, MGO was rarely ever the highlight of a Metal Gear release. That’s understandable, considering that most fans buy and play Metal Gear games for the story and gameplay, not the online multiplayer component. Still, it was always a shame that MGO seemed to slip under so many people’s radars.

This also seems like a good time to bring up the fact that Metal Gear Survive will have base-building elements, which was one of the more enjoyable parts of The Phantom Pain. Being able to develop your own base camp with crops, animals, and other resources to aid your survival sounds like a fun addition to the MGO formula, and if Konami decides to bring back the base invasion mode from MGSV, we could have a seriously solid multiplayer title here. It’s also worth noting that Konami plans on implementing daily and weekly events in the game to keep players coming back for the chance to get more resources. As far as we know, Survive only supports co-op in its online modes for now, but there’s always room for more.

There’s a lot of potential here to expand the game even more in the future with traditional MGO game modes and other additions, as long as Konami doesn’t mess it up. Who knows? With the battle royale genre being so popular these days, I wouldn’t be surprised if that becomes a thing in Metal Gear Survive as well. The game’s infrastructure certainly supports that.

For now, Metal Gear Survive is looking a lot more appealing, and much less dubious than when we first saw it in the debut trailer. If we’re able to look past the controversy surrounding the game and just accept it as a silly series spin-off, this might end up being the definitive version of Metal Gear Online we always wanted.