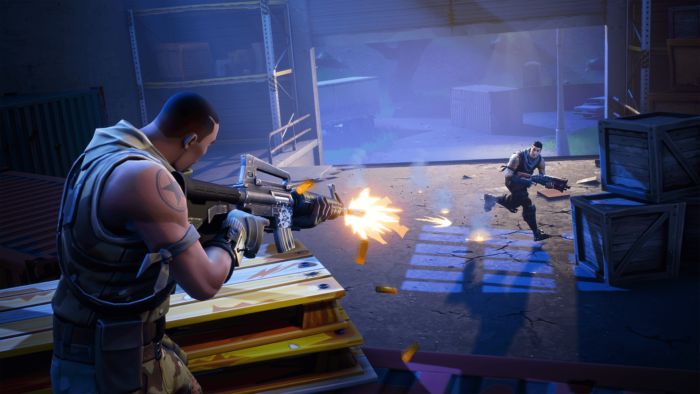 The gaming media loves a good buzzword: visceral, organic, player agency, cinematic; there’s a whole dictionary of jargon that has meaning but says very little at the same time. There’s another now, though this time it’s actually quite sharp: fast-following. It’s a business term coined by companies that quickly implement innovations which have brought success to rival firms, and it’s that exact shrewd strategy that catapulted Epic Games’ Fortnite into the spotlight two months ago. In a controversial move that went highly public, the developer incorporated a battle royale mode in the same vein as the immensely popular PlayerUnknown’s Battlegrounds (PUBG), to complement its base offering. To add further fuel to the fire, it released as a free-to-play experience, and it beat PUBG to consoles by launching across all platforms. The user reception has been unprecedented. Epic Games recorded over one million concurrent players on the game’s first day live and it has since garnered an enormous community of players who have stuck around long after the initial buzz of its launch.

Quite apart from Bluehole Studio’s condemnation of the game, the initial critical reception was also lukewarm. Some lambasted it as a cheap imitation, while others insinuated Fortnite’s stylized aesthetic completely ruined the strategic elements of PUBG that made its gameplay so compelling. While there’s little doubt Epic Games boldly replicated PUBG’s overall blueprint, Fortnite battle royale is so much more than a PUBG clone.

This is no diluted, poor man’s PUBG only kept afloat by its monetization model and console monopoly. No, Fortnite’s battle royale is not only better-suited to console by design, but it’s quickly forging its own very separate and completely unique identity. An identity with such a point of difference that not even PUBG’s arrival on Xbox One next month will be enough to spoil the party.

Despite the spike in its popularity, there still aren’t many battle royale games, and what little there are tend to follow the same military simulation tone set by games that founded this genre: ARMA2 and DayZ. Rather than shoehorn in any pretense of that accepted style, Epic Games ran with Fortnite’s whimsical, flamboyant science fiction premise. They also kept its scope sensible, not bothering to try and match the epic scale of PUBG’s map. Instead they littered it with weapons, minus the clutter of attachments or crafting. As a result, Fortnite is a far less intimidating proposition to battle royale newcomers.

Where PUBG’s sharper learning curve requires deft aim and a deeper understanding of its systems, Fortnite’s colored loot, smaller map, and faster shrinking safe zone make it accessible, easy to hop in and get going, and certainly less stressful. For the record, I enjoy both styles, but there’s no doubt that Fortnite feels like a better fit on console. That isn’t to say console gaming is any less serious, it just means that Fortnite’s quicker pace and easier learning curve has opened it up to console gaming’s wider audience.

Yet, Fortnite is absolutely no less strategic or tactical without the emphasis on realism, because it more than makes up for it with its fort building system. Having played since launch, I’ve observed an increasingly tactical implementation of fort building. It has been wonderful watching players develop their own tactics, find favorite building spots, use the system for traversal, and revel in the emergent gameplay that the system has brought to the battle royale template. Contrary to early skepticism, building is intuitive, it does add a meaningful layer to gameplay, and I absolutely do miss it whenever I boot up my PC and play PUBG.

It’s also worth noting that since launch, Epic Games has continued to take the game in an exciting and completely opposite direction to PUBG. Ignoring calls for a first-person mode, and the inclusion of vehicles at the behest of some fans, Epic Games has instead focused on embracing the quirkiness of Fortnite’s aesthetic and introducing a whole range of wacky items. Free from the shackles of ultra-realism and military simulation, the developers have been very creative, and why not? Consumable potions that regenerate health and armor or turn players into a mobile bush, or the all-new jump pad that allows players to shoot into the air and redeploy their glider for one-time use quick traversal. These whimsical inventions are not only a heck of a lot of fun to use, they also add a whole new layer to strategy and tactics over traditional battle royale experiences.

Fortnite battle royale has been a success because Epic Games has played to the strengths of the base game. Where PUBG is an anxiety-filled, realistic battle for survival, Fortnite is a more light-hearted romp. It’s a playground that takes the battle royale premise, tears up the rulebook and invites you to have fun. It might have at first appeared as a lazy reproduction, but as Fortnite continues to evolve with these bizarre consumables and the off-the-wall items, it distances itself from comparisons and further forges its own unique take on the battle royale formula. What’s so utterly exciting is that there’s no limit to where the developers can take Fortnite in the future. Unlike PUBG, there’s far more than just the prospect of new maps to change up its flavor. There’s the introduction of even more silly and unique consumables to look forward to, but there’s also things like more advanced buildings and traps, sci-fi weaponry, or the inclusion of its zombies from the base game. It’s going to be fascinating to see where Fortnite goes in the build-up to its full launch, as it is for PUBG, too. But one thing is for sure: they’re both completely different games.