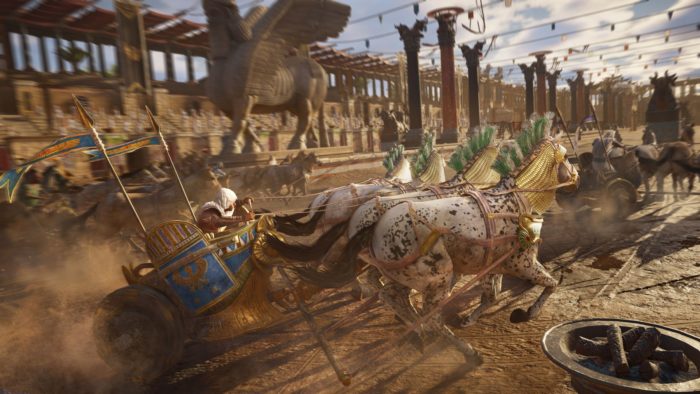 Finish All of the Side Quests

Note: This article contains some light spoilers about things that happen before and after you beat the game. If you want everything to be a surprise, don’t read on any further.

Assassin’s Creed Origins has gone full Witcher 3-style with the number of side quests available for players to enjoy. There really is a ton of content to get through, and even once you’ve finished the game, it’s highly unlikely you’ll have played all of the side quests. In fact, we’d suggest measuring the amount you engage during your playthrough is actually the best approach, anyway, spacing out these mini-storylines with other activities to try and amass XP. Take your time enjoying the narrative of quests because Ubisoft has done a pretty good job of making each one an interesting tale, not be rushed and skipped over.

Although you’ve likely ticked off a fair few in areas in which the game’s main quests take place, such as Siwa, Alexandria, Giza, and Memphis, there’s still plenty scattered across even the most deserted areas of Origins’ map. Go and track these down and savor your time in the beautiful landscape of Ancient Egypt.

Get the Isu Armor

According to Assassin’s Creed lore, long before even the most ancient human cultures, a society called the Isu ruled the earth. Their technology was so advanced that they were able to create devices with the power to enslave humans, unleash devastating attacks, and even resuscitate the dead.

However, the Isu were not only master craftsmen of these all-powerful devices, they also apparently knew a thing or two about fashion. Because in Origins, Bayek can get his hands on a set of Isu armor, a slick-looking gold-plated Assassin suit that looks totally badass. Unlocking the armor is no easy task, though, as it requires you to not only find and complete all of the stone circle objectives but also collect an extremely rare resource. But fear not, we’ve written a handy guide to help you out.

You might have collected a few Papyrus puzzle pieces during your adventure with Bayek already, but if you haven’t got them all, certainly make a point of doing so. Using Senu’s perception, they aren’t especially difficult to locate, and once you’ve got the complete set, you can go about deciphering their puzzle.

Papyrus Puzzles each hold a clue to the location of a piece of high-end loot. Some of the clues are pretty cryptic, but the loot reward is well worth their completion. Also, since the gear scales to your level, tackling these puzzles after completing the main game means that you’ll be getting useful gear even at this late stage. Here’s a handy guide to help you if you’re struggling to solve the puzzles.

The enemy outposts in Assassin’s Creed Origins have been brought over from Ubisoft’s other big franchise, Far Cry, and we’re so glad that happened. With the freedom to tackle each outpost according to playstyle, Origins allows you to test your stealth or combat skills across dozens of different enemy camps, each with different layouts and difficulty levels. Many of these outposts form sections of main and side quests, but there also plenty that you’re sure to have missed along the way, too. Not only do these camps take shape as fortresses or buildings, but some are also in the form of giant wooden sail ships that float in Alexandria Bay or along the stretch of the Nile river.

With Bayek avenged in his quest to purge the Order of the Ancients, go back and crush the rest of Ptolemy’s soldiers by clearing out the remainder of his outposts. The higher level camps make for an awesome challenge, even when Bayek is at a high level and plush with legendary gear.

The sheer size of Assassin’s Creed Origins’ epic map means that even once you’ve completed the main questline of the game, there are entire areas you won’t yet have explored. Not only should you make a point of traversing across and revealing all of these regions, but you should make it an objective to scale all of the highest locations and max out Senu’s perception. There’s a trophy/achievement as a reward for your plight, which will please the completionists, but it’s also a pastime that is so quintessentially Assassin’s Creed.

Climbing tall buildings and synchronizing has been a hallmark of the franchise since its very inception, and even though it’s not a necessary objective to clear the map as it once was, it’s surely still a tradition worth indulging. And anyway, who wouldn’t want to take in more pretty sights across this stunning open-world, right?

The Phylakes are Assassin’s Creed Origins’ most elite enemies. In fact, they’re so tough that we wouldn’t blame you if you spent most of your playthrough running like a chicken whenever the dreaded Phylake alarm rang. But now you’ve completed the main quest, equipped Bayek with legendary loot, and worked your way up to a high level, it’s time to take them on. Make it your goal to rid Egypt of these mercenary thugs once and for all by systematically wiping them out.

Even at this late stage, though, be very careful taking on a Phylake. Our advice is max out as much your skill tree as possible, making sure you’ve poured points into upgrading your melee and bow damage, as well as having the Seer ability throw firebombs. Combining these abilities will make much easier work of the Phylakes: start by shooting the Phylake and score some early damage as he runs toward you, then throw your firebombs to burn and panic him, as he flails in agony, move in and unleash your melee attacks.

Win all the Hippodrome Races

Hippodrome racing is an awesome new feature in Assassin’s Creed Origins. Strangely, though, it’s actually fairly easy to completely pass it by in the game’s main campaign. Early on in your adventure, you’ll be able to enter the Hippodrome arena and compete for various championships, but Origins doesn’t really encourage you unless you make it your business to go and do it yourself. You absolutely should, because not only are the races fun, there’s also lots of Drachma and loot to be scored along the way.

Although Hippodrome races are in a single direction with only one left turn to worry about, there’s still quite a bit of nuance to winning. Make sure you practice tapping the drift button around corners and save your speed boost for opportune moments on the straightaway. You’ll also need to play a little dirty, too, ramming opponents to cement your lead. Once you’ve beaten the standard tournaments, you’ll earn the right to enter Elite tournaments. These Elite races feature tougher, more aggressive opponents and reward with more Drachma.

Assassin’s Creed Origins’ brand new combat is at its finest in the Arena battles. This is the place to really challenge your skills, learning the nuances of attacking and striking, breaking shield defense, and moving tactically around the obstacle ladened arena floor. If you didn’t delve into this section of the game beyond the main quest, return here post-game and challenge yourself to beating the two missions: The Brothers, The Slaver. Once you’ve finished these two missions, you’ll unlock a menu similar to the Hippodrome race menu, with the option to repeat the Arena fights on a harder difficulty.

Note that you can’t use your own weapons, but there’s plenty of XP and Legendary loot to be earned as a reward for victory. Our top tip for winning the harder boss fights is to make sure you have the Overpower Chain ability, and also make good use of your adrenaline.

If you’ve already taken the time to complete most of the game’s side quests and you’re struggling to level up in the late game, there’s still a way to garner more ability points. Scattered across the vast open-world, there are hidden locations and items to uncover that immediately reward with ability points. For those that invested the Lion’s share of their ability points into increasing bow and melee damage rather than a range of different skills, this is a good opportunity to try any that are locked away.

There are two different types of activities that reward with ability points: Hermit Locations, and Ancient Tombs. There are five Hermit Locations that you can then use to unlock abilities that might otherwise be hidden. These are as follows: Faiyum: Eremites Hideout, Black Desert: Ra Horahkty Mountain Top, Paraitonion: Ogdamos, Qattara Depression: Aquifer Oasis.

Ancient Tombs are worth finding, not only for the extra ability point but also because they reveal some interesting background story on Ancient Egyptian culture. There are nineteen tombs to find in total, and they’re largely pretty well concealed. Luckily, though, we’ve written a handy guide with all the locations here.

Beaten the Arena? Taken out the Phylakes? Ridden Egypt of Ptolomey’s Soldiers? Don’t worry, there’s still another foe to beat in the form of dangerous animals, and there are countless areas of Assassin’s Creed Origins’ map that require you to tick off this objective. But beyond just checking a box, these animal encounters are genuinely exciting moments of gameplay because they’re often extremely difficult combat encounters that play out differently depending on the animal you’re battling. Hippos and crocs are certainly the toughest out there, and taking them out will reward with hard leather — an expensive and scarce resource that fetches a good price at vendors.