After a year’s break, Assassin’s Creed is back to tell us the origin story of the Assassins Brotherhood. As has been the case with the the other titles, the achievement/trophy is quite extensive, with Origin’s list featuring 51 trophies/50 achievements. For PlayStation 4 owners, there is one platinum, one gold, 15 silvers, and 34 bronzes. Here’s how you unlock all of them:

Editor’s Note: We’re currently playing through Assassin’s Creed Origins and updating this trophy and achievement guide as we go. Be sure to check back soon for more information on all of the trophies and achievements in the game.

All Trophies and Achievements in Assassin’s Creed Origins

Earn Them All! (Platinum)  – Unlock all the other trophies if you are on PlayStation 4.

The End (Gold)  – Complete the last main quest and finish the game.

I’m a Legend (Bronze) – Be equipped with only Legendary equipment. Ensure that every piece of gear Bayek has equipped is classified as Legendary in terms of rarity. You can upgrade items and find them as loot.

I’m Done Learning (Silver) – Activate a Master ability. Every skill tree has a master ability and it costs one point to unlock. You have to unlock the previous abilities to be able to get the master one.

Overheating (Bronze) –  Witness raining bugs in the desert. The trophy/achievement is unlocked by standing in the sun too long in a desert until Bayek hallucinates. We aren’t sure which desert you need to be in for it to trigger. We’ll update this page once we know.

For Those About to Die… (Silver) – Complete all arena events in the Krokodilopolis Arena. You can fast travel to either arena after completing the crocodile assassination quest. Once you’ve unlocked that ability, go to the arena and complete all the matches. Some of them require you to be a higher level so it might be a good idea to save it until you’ve finished the story.

Fatality! (Silver) – Finish an arena boss with an Overpower Attack. Defeat a boss in an area match by pressing R1 and R2 or RB and RT to perform an Overpower attack.

Ben-Hur (Bronze) – Win the first Hippodrome tournament. We haven’t reached the Hippodrome section of the game as of yet so we will update this section as soon as we have done so.

Road Rage (Bronze) – Destroy an opponent in a Hippodrome race. We haven’t reached the Hippodrome section of the game as of yet so we will update this section as soon as we have done so.

The Harder They Fall (Silver) – Defeat the war elephants Qetesh & Resheph. We haven’t found these exact war elephants yet but we will update this section once we’ve found them.

Slasher (Bronze) – Kill 3 enemies with one hit. In one attack, finish off three enemies.

Circle of Life (Bronze) – Feed a predator with a corpse. Once you’ve killed an enemy and are clear of danger, pick up the body and carry it over to an area in which you find predators (lions, hippos, crocodiles etc) and drop it on the ground near one of the animals or throw it towards them. The predator should then eat it.

The Festival (Bronze) – Complete the side quest ‘Lady of Slaughter’.

Shadow of Egypt (Silver) – Kill 10 enemies in a row without being detected. Silently kill enemies one by one, without being seen by another enemy, until the trophy/achievement pops.

Smash! (Bronze) – Destroy 100 breakable objects such as vases by attacking them.

I Know My Land (Bronze) – Defog the whole map by syncing at all the viewpoints.

Raider of the Lost Tomb (Bronze) – Complete a tomb. They’re scattered all over the map and the story missions will take you to some. Simply raid one for the trophy/achievement to pop.

I Can See My House From Here! (Bronze) – Reach the ‘Top of the World’ in the Black Desert territory. Head to the point on the map below. 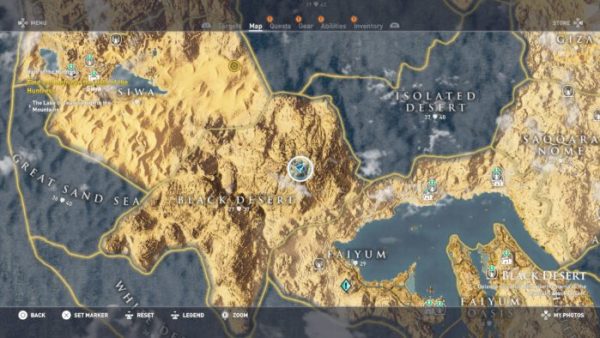 Set-Up Date (Bronze) – Bring a tamed lion to a crocodile. To do so, first ensure that you have unlocked the Animal Taming ability and then find a lion that is a lower level than you. Knock the lion out with a sleep dart, then approach it and press Y/triangle to tame it. Then, have the lion follow you to an area with crocodiles and approach it until the trophy/achievement pops.

Where’s My Black Flag? (Bronze) – Defeat 8 Ship Captains. Board ships and take out the captains.

Reporter (Bronze) – Take 1 photo in 5 different territories. You access photo mode by pressing in the left and right thumbsticks and you take the photo by pressing X/A.

Overdesign (Bronze) – Kill a poisoned level 35+ enemy with the torch in less than 30 seconds. You attack with the torch just as you do with any other weapon. You can also throw it at an enemy.

Free as a Bird (Bronze) – Use the eagle for a total of 30 minutes. Press up on the d-pad to call the eagle. Simply amass 30 minutes of usage with the eagle.

Archer of the Month (Silver) – Headshot kill an enemy with the bow while in the air. Fire Bayek’s bow after jumping off something.

Rider’s License (Bronze) –  Use all types of vehicle at least once. There are three types of boats as well as horses, camels, chariots, and carriages. Once you have ridden each one once the trophy/achievement will pop.

Run For Your Life! (Bronze) – Run away from three fights with a hippo. Once a hippo begins to attack you, simply run away until the fight stops.

Elementary, My Dead Bayek (Bronze) – Solve a papyrus mystery. They are riddles you can find throughout the world that lead you to a nearby location. Simply solve any one of them – some of them are very easy.

Reduce, Reuse, Recycle (Bronze) – Collect 100 trinkets and sell them all at once.

Namaste (Bronze) – Use Dawn & Dusk to make time speed forward 30 times. It is one of the first skills you can unlock. It allows you to sit and pass time by holding the touch pad on PlayStation 4 or the views button on Xbox One. Do so 30 times.

Stargazer (Silver) – Complete all 12 Stone Circles. The stone circles are activities where you need to line up the stars at a particular location. They’re located all around the world, so check every question mark. For the trophy, you have to do all of them. It reveals something but we have yet to find out what.

Defy Authority (Bronze) – Defeat a Phylakes. They are high level and aggressive guards that are found as a red devilish helm on the map and are first encountered in Alexandria as you follow the story missions. You will know when one is nearby because a load horn noise will sound and a message will appear on the screen. They are often high levels so they’ll be tough foes.

Roooaaarrrrr! (Bronze) – Tame a lion. To do so, first ensure that you have unlocked the Animal Taming ability and then find a lion that is a lower level than you. Knock the lion out with a sleep dart then approach it and press Y/triangle to tame it.