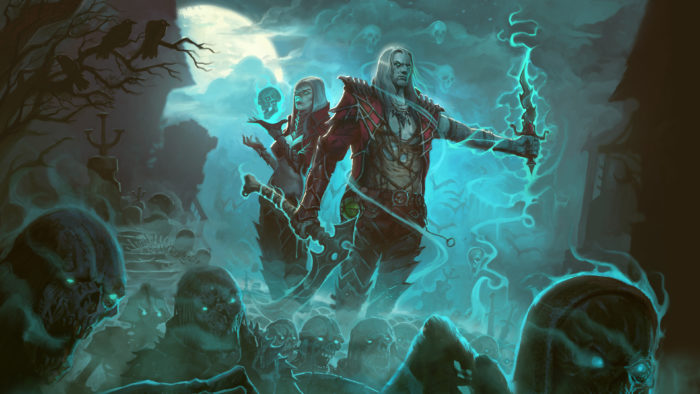 I had access to only a small handful of skills during my hands-on demo at PAX East with Diablo III’s upcoming Necromancer class, but I still had a freaking blast. Seriously, this class is going to be amazing when it’s fully loaded with all of its skills, runes, and ability augmenting armor. Let’s not waste any time and dig into all the reasons why I’m going to definitely be obsessed with the Necromancer as soon as it releases sometime this year or as Blizzard would say, “soon.”

Showcased during the demo were brand new never before seen abilities. Namely: Leech, Devour, Grim Scythe, Blood Golem, Blood Rush, and Blood Nova. If you can’t tell, there’s a running pattern at the end there. Lots and lots of blood. The Necromancer class is the metal class we’ve been sorely missing in Diablo III. Just look at her.

Hell f”ing yeah. Out of those abilities, by far the best was a combination of Leech, a new curse, and Blood Nova. What Leech does is curse enemies so that attacking them transfers their health to you, and your teammates. Awesome. Blood Nova is a super strong area of effect attack that drains your health when used. Put them together and what do you get? All the benefits of Blood Nova with the health penalty negated thanks to the draining effect of Leech.

Even if this effects diminishes at higher difficulties (I have no idea by the way this is just a hypothetical, it could rock faces still on high Torment also for all I know), it’s still incredibly entertaining to just pulverize groups of enemies with The Shining-like waves of blood just emanating from you over and over again. I felt unstoppable and on top of that, Leech can also heal my teammates too (support Necro for the win) and on top of that, we learned during the session that curse effects can stack. My word, Necromancer is going to kick ass.

Then there is Blood Golem, another new notable skill that we got to test drive. Fans of Diablo II will recognize Blood Golem as one of the Necromancer’s more iconic summons. The Blood Golem is a little different this time as it won’t be sharing damage with you as it did in the past, but it does come equipped with an ability which allows it to deal AoE damage which also restores your health. If curses aren’t really your thing and you’d rather just summon a bunch of crap (or some kind of combination of the two), that play style is certainly going to be available to you between Golems (for now we just know of the Blood Golem) and Skeleton revives.

Corpses are also going to be important as you are a Necromancer after all. In addition to previously revealed Corpse Explosion, we got to see another corpse-based skill, Devour, which consumes corpses to restore Essence, Necromancer’s primary resource. Cleverly, developers have made it so that corpses will stand out more and stay on screen while playing as a Necromancer, but will not pop as much for players not playing as a Necromancer.

In addition, Necromancers have access to Grim Scythe which is a conal attack which drains essence from enemies, and Blood Rush which allows the class to shade forward through solid objects in, well, a rush of blood.

Putting all this together with the skills we already knew of, and ones we can kind of figure will reveal themselves eventually, and we can see how the shape the Necromancer is starting to take. It appears to be a highly offensive pet class that can take advantage of curses to support and increase the DPS of a team while also being capable of commanding a huge army of minions to just cause complete chaos on the battlefield.

I can’t stress enough how much fun it was to play as the Necromancer in Diablo III. Old school Diablo II fans should rest easy knowing that Blizzard isn’t doing anything to mess with the beloved character. Not only is Blizzard faithfully recreating it, they are also making it even better.