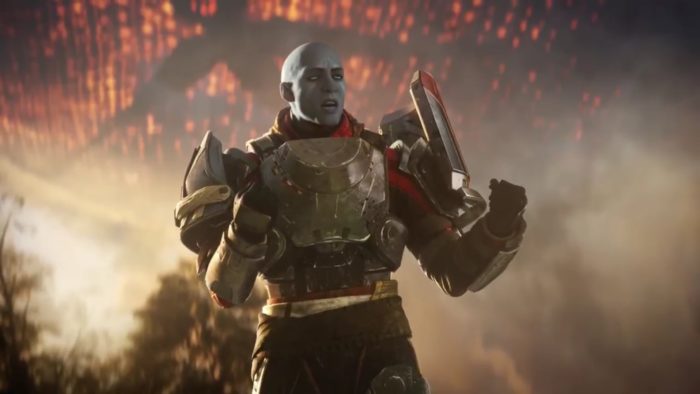 With Destiny 2 officially revealed, it’s hard not to get wrapped up in all of excitement that the new trailer invokes. There’s little doubt that Bungie has injected this game with more personality than the previous entry and it’s clear that the direction of the story is something more thoughtful than our fight against the Vex. Yet, with all the fun and pre-order bonuses already being shoved out the door before an ounce of gameplay has been shown, one can’t help but be cautious.

When Destiny released back in 2014 it received average to good scores among the community and publications due to the rather alarming lack of post-game content and a dull story. This was not only due to the complicated production, but the fact that this game was advertised pretty much everywhere, like in the middle of Times Square. Hype took over the game and what a lot of us hoped for never made it into the final product, as entire trailers seemed to offer content that many of us had never even witnessed. This also included two mediocre expansions that failed to really inject Destiny with new life beyond a bit of extra post-game activities like a new raid.

It wasn’t until The Taken King released that Destiny finally found its footing and began to establish a brand that players could more easily recognize. Gone were the overly serious tones that made up the previous missions, as the title embraced its pulp science fiction roots. This trend continued with the last expansion, Wrath of the Machine, and every subsequent update since. However, it’s important to remember that Destiny took literally a year before many began to see what a fantastic game it truly could be. Hopefully Destiny 2 will not have many of those same problems, where ambitious goals and ideas were scaled back for the sake of making money and producing an easier product to manage.

Now this doesn’t mean that Destiny 2 doesn’t have things to be hyped about, as seeing The Last City and Tower fall to ruins feels both personal and exciting. The Cabal, a mostly side-lined foe, has taken center stage in the fight against humanity which offers a plethora of interesting theories. Even the lovable Cayde-6 (voiced by none other than Nathan Fillion) is still around, cracking jokes and injecting some much-needed humor into this grim scenario. Being able to finally venture out into The Last City has been something that virtually every Guardian has desired every since they arrived at the Tower and stared out over that glowing vista below them. There’s a lot to be excited about this time around, yet hype is an especially cruel mistress that has crippled games before.

No Man’s Sky is by far one of the most prominent examples, as the community and interest around this survival game took on a life of its own. While it certainly didn’t help that Hello Games’ Sean Murray had a bad habit of making claims that never really panned out, critic Jim Sterling was allegedly DDoS’d for not giving the game the high praise that many assumed it would be. It’s this hype mentality that can easily offset or even ruin a lot of people’s perception of a game, especially ones as ambitious as Destiny.

What’s worse is that there’s a lot of hope and desire resting on the shoulders of Destiny 2, as many players have flooded the forums with ideas for years now about what they want to see. Some concepts, such as Sparrow League Racing, actually made into the core title as an alternative game mode. Bungie is clearly listening to the community, which is both wonderful and worrying since it means that people will inevitably be let down if their great idea doesn’t make it in. One has to also consider what content will Destiny launch with and which will be available down the road as many of the features people love today weren’t there originally.

Loot is the first issue that comes to mind, due to the almost laughably stingy rewards system that was implemented in the core game. Not only did this become the butt of many jokes within the gaming community at large, but Bungie had to rework the entire engram system via a Loot 2.0 update. It’s important to understand that with a game like Destiny 2 not everything we desire will be in this title and one should mitigate their hype until more details are revealed. While we are set to get an actual gameplay reveal on May 18, there’s little doubt that it won’t be as substantial as the various live stream updates we’ve been getting.

Yet, this isn’t meant to deter anyone from being excited about a new Destiny releasing later this year, but a simple warning to be a bit more cautious. The Destiny community is perhaps one of the most passionate out there and while there’s nothing wrong with that, it’s important to understand we only have a few details about this game. If you are on the fence about dropping $250 dollars on a Collector’s Edition, then consider waiting to see how things pan out over the next few months. There’s still a lot of time and questions to be answered, so for now, I am cautiously optimistic at what Destiny 2 could deliver. Who knows, maybe it’s actually the mythical Sweeper Bot that comes to our rescue in the end!