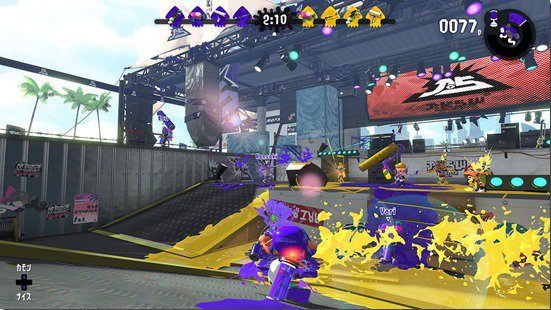 Splatoon 2 is playable here at PAX East, and I can confirm that it is every bit as Splatoon-y as you’d expect it to be. In other words, it plays exactly like you’d expect a Splatoon 2 sequel to play. The graphics are a bit better, and there’s a new dual-wield paint gun, but it otherwise feels like the paint-by-numbers sequel you’d expect.

Nintendo had the returning Turf Mode, which tasks teams with covering more of a map with their own side’s paint than the other team can, on hand, and it’s still as fun as ever. The new dual-wield gun also works as you’d expect it to, by shooting paint from two guns at once instead of one. Neat, but hardly justification for a full-blown sequel.

Still, anyone who enjoyed Splatoon — who didn’t? — will have fun with Splatoon 2. Unless, of course, they’re forced to play the way Nintendo wants them to: with motion controls. I wrote earlier about how stellar the motion controls are in Arms. In Splatoon 2, however, they’re as annoying and unnecessary as ever.

Nintendo clearly wants you to use them, though, as there was no way to turn them off during the PAX East demo. A Nintendo representative told me I was far from the first person to ask about that option, and this was only about half an hour after the show opened for its press-only hour.

The full game will of course have the option to disable the motion controls, but why not have that option on the convention circuit? The original Splatoon had it, so it’s hardly like Nintendo has to reinvent the wheel with this thing. Nevertheless, the company insists on forcing players to flail the Switch Pro Controller up and down for vertical aiming. The best you can hope for here is that you swing it in the general direction you meant to and cover as much of the wall in paint as you can. Yuck.

Arms proves that motion controls can be great in certain applications. Splatoon 2, however, is an unwanted reminder of what everyone has come to loathe about them over the past decade plus.

Perhaps its fitting that Nintendo is once again shoehorning motion controls into the Splatoon franchise, seeing as Splatoon 2 feels like Nintendo shoehorning a sequel onto its shiny new console where it probably should have just re-released the original with new maps and guns and improved graphics at a budget price. Come to think of it, that’s exactly what Nintendo seems to be doing here — minus the budget price.