How to Beat Adamantoise – Preparation and Pertinent Information 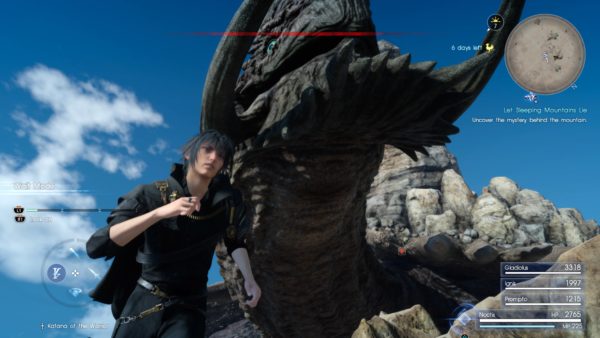 The Adamantoise is a side boss in Final Fantasy XV which you’re required to beat if you want the Platinum Trophy or all 1,000 Gamerscore Points on offer. Defeating it will earn you the Tortoise Toppler Trophy/Achivement, but it’s no small task. This overgrown tortoise happens to be the size of a mountain, and you’ll have to beat the game first before you have a chance to fight it.

The Adamantoise is the target of a hunt titled “Lonely Rumblings in Longwythe” that you can obtain in Hammerhead by talking to Takka in the restaurant. In order to unlock that hunt, you must first beat the main story, then talk to Cindy in Hammerhead to begin the quest “Let Sleeping Mountains Lie,” which tasks you with investigating some earthquakes. When you head to the given location, you’ll awaken the Adamantoise, which unlocks the hunt.

Before setting out for the hunt, there’s a few things you should do to prepare. First off, you’re going to want to level up quite a bit. This is a level 99 boss with 5 Million HP, and it is absolutely monstrous, capable of dealing insane damage to you and your teammates. You don’t need to be level 99, though, thanks to the slow nature of this boss and its relatively simple attack pattern. Just try to be at least around level 70 to give yourself a better chance.

Another important piece of information is that there are no checkpoints during the fight, so if you die, you will have to start over from the very beginning. This may not sound like a big deal, but when you realize that this fight can easily take over an hour depending on your skill level, then it becomes a worry. On top of the restart issue, you can’t get auto-revived on easy. You must win the fight without dying.

There is a campfire nearby that you will definitely want to use in order to have Ignis cook a meal before battle. Pick food that increases your Critical Boost (such as Fishtsticks on Sticks) or something that increases your HP recovery rate (such as Triple Truffle Risotto). If you want a recipe that greatly increases both, max out Ignis’ cooking level to unlock the Golden Tail Soup recipe. It guarantees critical hits while also providing the best HP recovery you can get, making you virtually unstoppable for a while. If you have the AP for it, you may want to also invest in the Aftertaste, Lingering Aftertaste, and Persistent Aftertaste skills in Ascension under the the Exploration tree. They cost 18, 99, and 333 AP, respectively. These will greatly increase the amount of time that your stat bonuses from eating Ignis’ cooking will last.

For Noctis specifically, any stat boosts are welcome, but you really will want to save your AP for his Warp-Strike boosting abilities under the Combat tree. Warp Factor I and II are 24 and 52 AP, and will greatly increase the amount of damage you deal against the Adamantoise. If you have the points, go for Point-Blank Warp-Strike (333 AP) as well, since you’re going to be very close to the huge beast for pretty much the entire fight. When it comes to weapons, bring your best Greatsword, just make sure that it doesn’t have Holy, as the boss is immune to that.

Also, don’t forget to bring a ton of restoratives to keep your party in tip-top shape if things get rough. This is a long battle, so bring everything you can. You probably won’t need them early in the fight depending on what you have Ignis cook, but you’ll eventually have to rely on them when things get rough. Muscle Stimulant is very useful as well, as it provides extra damage, and you may want to bring some Magitek Boosters since they cancel MP costs, allowing you to Warp-Strike non-stop.

Once you’re all set up, it’s time to fight the Adamantoise.

How to Beat Adamantoise – The Fight 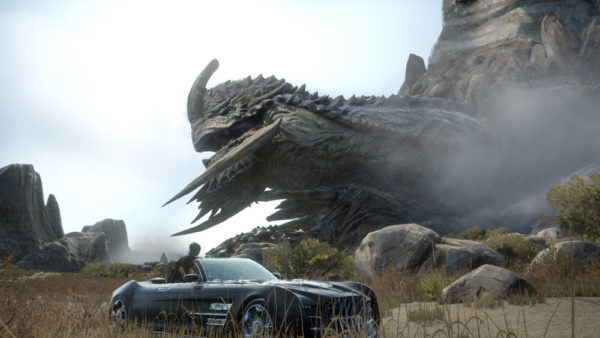 While this seems like a very scary fight, it’s actually quite simple when compared to other Final Fantasy XV boss fights. The monster is very slow, making its attacks highly predictable. When you arrive at the area where the battle takes place, hop on a Chocobo and charge in as close as you can. You should get close enough to be able to use the Warp Points located in front of the Adamantoise.

Pick one of the feet, this will be your target throughout the majority of the fight. All you’re going to do is continuously Warp-Strike the inside toe (meaning the one closest to the head). Continue using this attack, using the nearby Warp-Point to recharge your MP when necessary. Every now and then Adamantoise will start to move. Simply Warp towards the tall rock right in front of the Adamantoise’s head, and then return to the foot to continue your onslaught.

After you’ve done enough damage, the monster will collapse. When its head falls to the ground, you will have access to its eye. This is when you’ll want to use any Muscle Stimulants or Magitek Boosters you may have brought along. Instantly head towards the head and continue to Warp Strike the eye until the huge tortoise gets back up. When that happens, warp back to the foot that you’ve been attacking non-stop and continue.

All that remains is basically a game of rinse and repeat. As your boosts wear off, you’ll need to rely on your restoratives a lot more than you did at the beginning of the fight. Also, the Adamantoise will begin kicking up even more dust clouds that will damage Noctis and the rest of the party. Other than that, there are no major changes to the encounter. As long as you keep your cool and don’t grow impatient, the fight is breeze… a very slow, drawn out breeze.

When the dust settles and the Adamantoise finally falls, you will obtain one Adamantite. You’ll also receive a notification that all of the frightened citizens have come out of hiding. All that’s left to do is turn in the bounty back in Hammerhead, where you’ll receive 50,000 Gil, an Adamantite Bangle, your Trophy/Achievement, and a heck of a lot of bragging rights.

For more on Final Fantasy XV, be sure to check out our ever-growing wiki.