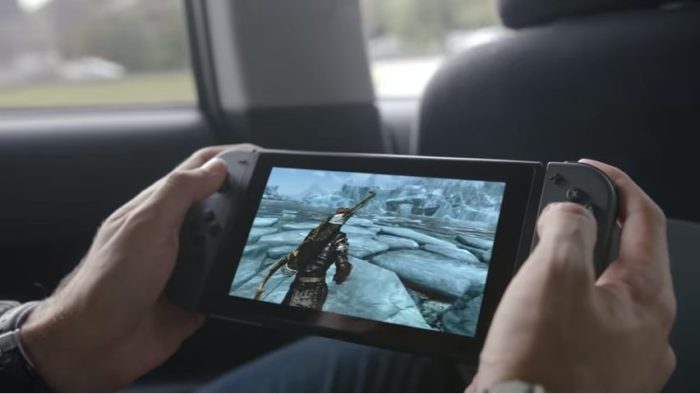 Today, Nintendo unveiled their long-rumored NX console to the world, officially called the Nintendo Switch. The Switch, as the name is surely meant to evoke, is a home console that can also be taken on the go in a form factor similar to the Wii U gamepad.

The Switch is an ambitious project for Nintendo and seems to marry their home console and mobile gaming platforms into one. Nintendo tells us that the Switch is meant to be a home console first and mobile platform second, but in theory, any game that works on the big screen can be taken on the road.

In their inaugural reveal video for the console, we see multiple shots of the Switch running Bethesda’s beloved The Elder Scrolls V: Skyrim. That’s really exciting to see and (along with an image highlighting all of the publishers working on a Switch project) suggests that Nintendo is pulling no punches in trying to court third-party developers to the platform. This is the strategy that the company has always employed, though, and the unfortunate result has been the same for 15 years.

Nintendo has the habit of making us believe that their console will have long-lasting 3rd party support from every direction, but historically, reality begins to set in after a few years. Take the Wii U, which launched with such gems as Assassin’s Creed 3, Mass Effect 3, Call of Duty: Black Ops 2 and Batman: Arkham City. The idea here was to show a position of strength for Nintendo and show that their console will be getting all the same titles as its competitors. But it only took a year before games in these series stopped releasing on the Wii U, and not much longer before the only big launches on the system came from Nintendo themselves.

The same cycle held true for the Wii and the Gamecube (and even the N64 to an extent), and the same could very easily come to be with the Switch. But why does this always seem to happen? Why do third parties pull out or not release their biggest games on Nintendo’s platform?

It’s because Nintendo loves to be weird in two very specific ways. First, they love to make unique consoles that create new kinds of experiences (despite their success level). The Wii was primarily a motion gaming device, the Wii U was a more traditional controller with the screen in the middle of it, and the Switch is a home console with the guts of a tablet. Compared to the Xbox One, PS4 and beyond with the Pro and Scorpio, which all have very similar architecture and power levels in their race to the top, Nintendo doesn’t make it easy for publishers to invest research and development into making games for their weird platforms. More so, at the Switch’s power level (which uses the Nvidia Tegra processor that’s in the ballpark of a PS3 and Xbox 360), it’s not as simple as porting over the latest year of Call of Duty or Watch Dogs 2. Now, arguably more than before, the company has a unique beast on its hands that requires a different set of tools.

It takes money and time to make a game built for the predictable modern consoles move to a strange Nintendo platform and, eventually, a small audience will tell developers it’s no longer worth the hassle. And after this happens, we get the later years of the Wii and the Wii U, in which we see the occasional great game developed by Nintendo themselves, and the rest of the year the console is an okay paper weight.

So is the Nintendo Switch’s third party fate already sealed?

It’s clearly too early to speak in certainties, but the Switch has an uphill battle to keep third parties around. Asking third parties to make games for the Switch likely means making drastically different games than would appear on the PS4/Xbox One, but there’s always hope for a healthy supply of titles if the console really takes off. But in reality, it’s possible we’ll have another Nintendo machine on our hands that mostly just plays Nintendo games.

The Switch may benefit most from focusing on indies instead. With its portability and more than enough power to play the bulk of indie games we get these days, the Switch has the potential to be an amazing machine for smaller titles. Sony has written the book on courting indie developers to their console, and Nintendo should plagiarize the whole thing. But in truth, it’d be pretty unlike the company to be as open a platform as Sony has built, so this might be less likely than it sounds.