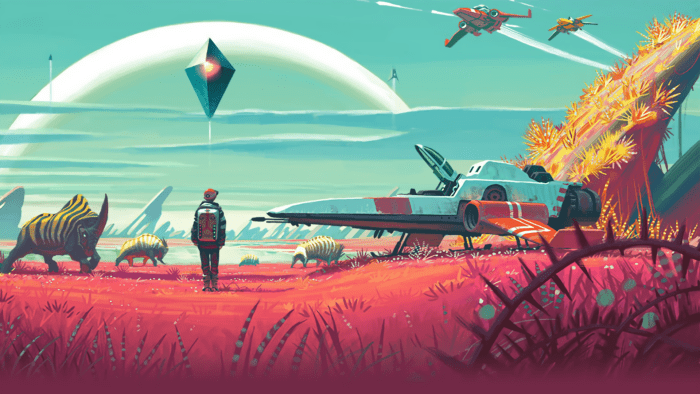 No Man’s Sky is a game that hits you in waves. After my first 15 hours with Hello Games’ latest project, I had found something remarkably serene about the random chaos that myself and thousands of other players were thrust into. Everything that unfolds before the player’s eyes, from planet landscapes to the very flora and fauna, comes to life thanks to a painstakingly tuned generation algorithm. As I embarked on what would be another 30+ hours of gameplay, still riding the honeymoon of that first wave, I was afraid there was nothing more than that serenity to the experience.

No Man’s Sky is a massive undertaking, one that offers exploration and discovery of an impossibly large universe made up of over 18 quintillion planets. After getting stranded on the edge of said universe, players must figure out how to survive and navigate the worlds with nothing more than a Multi-tool (a mining laser/weapon hybrid) and their determination. The experience of entering something wholly unknown carries the weight of the entire game, and for a while it seemed like the proposition couldn’t possibly be enough to hold up the colossal public expectations for No Man’s Sky.

Thankfully, Hello Games had something planned for that inevitable moment when exploring simply isn’t enough. No Man’s Sky offers narrative “paths” for players looking for something a little more guided. These story lines, ranging from simple objectives to grand forces, are there whenever the intimidating openness is just too much.

The path touted heavily leading up to the game’s release tasks players with heading towards the impossibly vast universe’s center, a shrouded goal over 150,000 light years away. On paper that sounds exceedingly simple, but of the paths offered in the game, it’s actually the most daunting, forcing you to learn the many intricacies of gameplay. 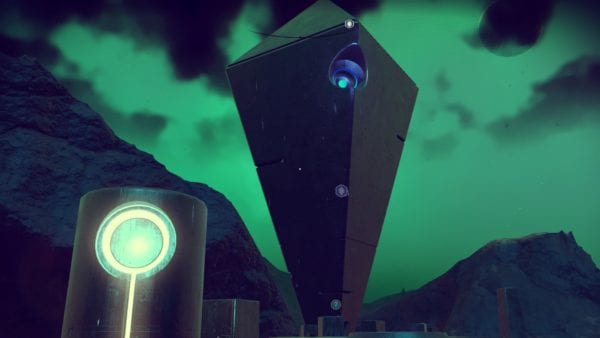 There’s a surprising amount of management that goes into crossing an entire universe. When starting out, you have enough firepower and inventory space to become a budding space explorer, and for a while everything works out pretty well. You’ll see numerous planets, play with the fauna you encounter, perform the dance of death with some overzealous pirates, and meet aliens who may have watched one too many Daft Punk music videos.

As time moves on and your journey towards the center progresses, you’ll need to start relying more on the resources around you. Checking Space Stations for new blueprints and trading opportunities, learning the markets to keep your trip well-funded, and figuring out the best use for your limited space. Economies change as you move from star system to star system, alien cultures will slowly teach you their languages and beliefs. These elements help to take something so exceedingly basic as “get from point ‘A’ to point ‘B'” and add a level of depth forcing you to adapt and grow.

For those who need something more from their games than a distant destination, you’ll be happy to know that going straight for the center of the universe is only one option. An alternate playstyle offered me the opportunity to learn more about this world and its inhabitants. This path, known as the Path of Atlas, had much more of a narrative, providing a sense of purpose to the player and the history you encounter. When I decided to give Atlas a chance, I once again found myself altering how I played. No longer was I just managing my inventory for speed and the ability to skip as many star systems as humanly possible. I was playing much more methodically, taking the time to learn the several languages spoken in the universe and looking forward to my next encounter with that mysterious force. 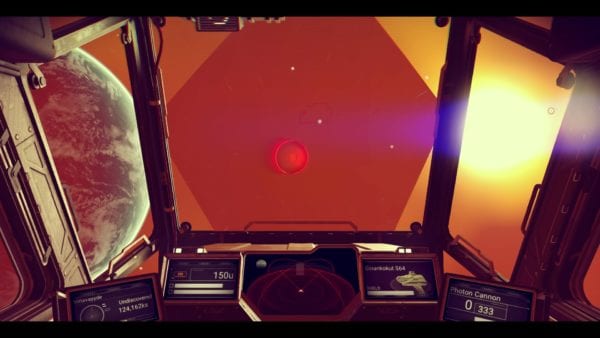 Providing these paths with poignancy is the atmosphere that surrounds everything in No Man’s Sky. Space is weightless yet overbearingly heavy, empty and full of endless possibility. The beauty of No Man’s Sky’s universe when combined with its stunning soundtrack delivers conflicting emotions that drive the entire experience. You’re alone one moment, but the next your hope and a desire to learn become your companion.

While some planets are bursting with gorgeous flora and an abundance of species, others are ravaged by nuclear storms or burned to ash thanks to their proximity to the sun. There are only two constants between the countless worlds: the lonely expanse of space between them, and you.

As the music softly rises from the background during those moments, the ones where you’re staring out into nothingness, you can’t help but feel the weight of your singular existence on your shoulders. This universe that you’re exploring wasn’t built around you or even for you. It just exists, and you’re a visitor. Yet, while you aren’t the center of this universe and are in fact much more of an anomaly within it, your existence provides purpose. Those planets are discovered because of you, they become known because you traveled there, uploaded to the grand database of all our encounters. Your actions become part of No Man’s Sky’s history, part of its code.

Linking all of these elements is a gameplay system that is an odd but satisfying mix of different genres. The action is fairly simple to get into, allowing players to traverse the various planets with the help of a jetpack and an Exosuit that can weather most hazards. Combat is not overly abundant, but when it does occur, it’s engaging and responsive. Shooting down Sentinels or dealing with space pirates is challenging and provides some heart-pounding moments between long stretches of serene exploration. The survival mechanics are also fairly simple, requiring that players make sure their life support, shields, weapons, and ship are charged and fueled. It provides a light layer of realism and management to your exploration, adding a set of rules to No Man’s Sky, but it never becomes too overbearing to the point where you’ll find yourself worrying about staying alive more than experiencing everything the game has to offer.

Random alien encounters, held on Space Stations or lonely planetary bases, offer players moments of choice: a short exchange of words, some context clues, and three available responses. You only get one shot at correctly deciphering the situation and receiving a valuable reward. In some ways these conversations hearken back to classic text adventures, where you’d get an image, a statement, and nothing more. These still moments are brief, but let your imagination run wild. 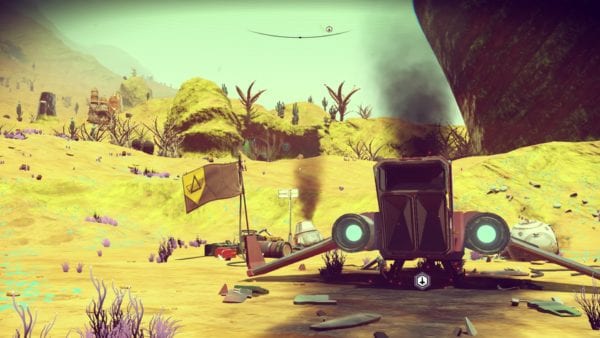 Helping to make these a bit more entertaining is the fact that you start out knowing none of the alien languages. At one point, during one of these exchanges, I ended up agreeing to take the place of some poor alien in a shotgun wedding. I had no idea what I was signing up for because I had skipped trying to learn languages up until that point. Rest assured, I vowed to learn every word I possibly could from then on. That moment of hilarity made the universe feel more alive, and made me look forward to each random encounter all the more.

After all of my time with No Man’s Sky, my feelings from my initial impressions still hold true. In fact, they’re even stronger. The random nature of this universe and the eclectic mix of gameplay elements really shouldn’t work. Placing players inside of a vast, simulated universe and immediately reminding them of their insignificance there is bold, and it helps uplift the nature of No Man’s Sky as a whole. As corny as it may sound, that sky really does belong to no man. We are visitors granted the privilege of sailing among the stars. 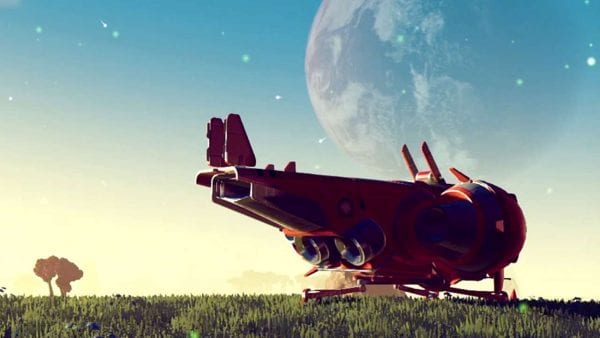 No Man’s Sky will not be for everyone. There are those who will find endless joy in discovering new planets and scanning different combinations of animals, and others will find it too repetitive. Yes, the planets are fresh, but you do essentially do the same thing on each of them. Repetition will seep in if you are not driven by the intrigue of discovery for discovery’s sake.

Then there is the openness of it all. The planets aren’t small, bite-sized affairs. They’re fully sized, capable of dwarfing some of the largest modern games. While that seems like every sandbox lover’s dream, for some it can be a bit overwhelming, a touch too open, and devastatingly lonesome, though that void will be an unforgettable serenity for some.

No Man’s Sky is no doubt a magnificent feat in game development. I am left humbled by all that I have seen and intend on continuing my journey in an attempt to see as much as possible, well aware I will never see it all. Space has its hooks in me and I don’t think I’ll ever want them to relinquish their hold.