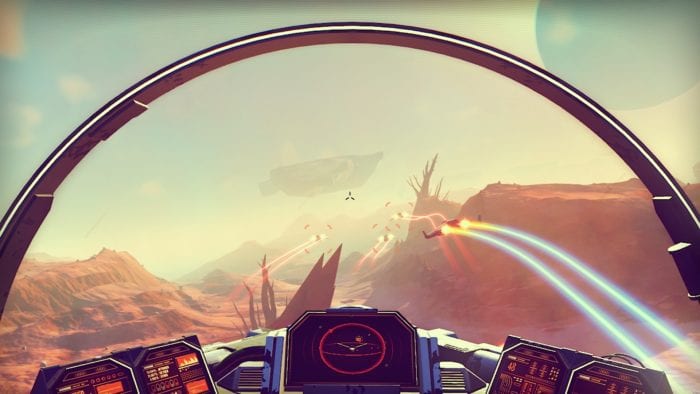 No Man’s Sky on PlayStation 4

No Man’s Sky is one seriously ambitious release from Hello Games, the team that, before now, only brought us little action titles starring a portly stuntman. Trying to get a grasp of the sheer scope of what’s on offer is a daunting endeavor in itself, and while our full review will arrive at a later date, diving into the day-one patch for over 15 hours has proven an even greater experience. I went into the title with only a murky idea of what to expect, and after spending a fair share of time lost among the stars, it seems that was exactly the point.

No Man’s Sky is very much a game about the exploration of a world too massive to ever be fully discovered. The game is so hinged on the unknown that it almost crumbles under its own weight – but just almost.

I’ve played a healthy number of exploration-heavy games and not many have managed to truly grip me. Exploring a new place is intriguing for the first few hours, but eventually the machinations working behind the curtains begin to show themselves. Even if you try to ignore them, the patterns arise and you can’t help but realize you’ve been travelling a cycle that no longer feels much like discovery. I don’t hold that against developers; creating valuable randomness is a tall order, and the fact that many titles can keep up the show for even a few hours is admirable. But No Man’s Sky is onto something completely new.

From the moment the game began I found myself staring at a sunlit sky. Cliche yes, but the sky was an odd color, and as I panned my camera down and around I saw lush purple grass, bright orange trees, and an oddly spiked dingo. My crashed Starship sat broken beside me and was my first clue that I did not belong on this planet. I named it Alderaan.

Now, I don’t know about you, but when I learned that No Man’s Sky would have quintillions of planets, I expected these many worlds to be small, contained experiences. A sample platter of different biomes and alien species. Instead, I found myself an hour away from my broken ship, partially freezing, overburdened with Iron and numerous Silicates, and suddenly grasping what No Man’s Sky actually is. I wasn’t here to explore sample-sized worlds, I was but a speck on the canvas that is the game’s universe. It was not built around me, and I am not the center.

Once the grand idea of exploration had set in, I only needed the mechanics of gameplay and discovery to click all the same. Thankfully, I have yet to be disappointed. Walking around planets is a slow but purposeful action. Not knowing what awaits on the other side of a cliff, you’re forced to be either deliberately cautious or to approach with reckless abandon. I was often greeted be some skittish creature who meant me no harm but did not trust me. I used my jetpack to scale mountains and to jump down into caverns. I swam underneath horrifying monsters. Even moments as small as peeking into a cave or stumbling across some deserted facility feel momentous.

Eventually, the mining resources element of gameplay began, and my first worry reared its ugly head. With so much freedom granted to me, would there be any proper consequences? Hello Games had mentioned the Sentinels, mechanical beings that keep order across the universe, so I decided to raid a tiny patch of forest for all of its Carbon.

A small Sentinel approached, scanning me as I stood there, staring. I think it wanted to see if I’d stop what I was doing while under its watchful gaze, because once I went back to firing at every tree in sight with my trusty Multi-tool, the little scanner opened fire. The fight was on, and before long my rebellious attitude had me surrounded by sentinels. After exchanging plasma rounds back and forth, the attack units arrived – vicious, robotic hounds.

Combat is where you’ll get a real feel for No Man’s Sky’s controls. Once my leisure time ended and shit hit that proverbial fan, I was able to experience how well all of the systems really worked. I ran, jumping around to confuse the enemies as I watched red-hot blasts streak across my screen. Firing my Multi-tool in Boltcaster mode (the true weapon mode) felt nice as I rained fully automatic laser blasts at my enemies. Then, when my shields were depleted, I hid behind a huge rock to repair and recharge. Menus were clean and easy to use, allowing me to get right back into the action.

So far, No Man’s Sky had done everything right, and I just needed to get off of the planet. After a few objectives that served as the game’s tutorial, I was headed straight into this sky that apparently belongs to no man. Even after watching ships take off in all of those trailers and developer diaries, blasting into space doesn’t lose its touch. Up there, I was greeted by a familiar realization: No Man’s Sky is a true universe that stretches endlessly in all directions. Mysterious looking planets, moons, suns and other celestial bodies loom all around. There’s no fast travel either, you have to actually fly to these locations if you want to explore.

The omission of fast travel feeds into the whole sense of exploration by requiring your time, annoying as it may be. You are a lone explorer on a grand quest or some frivolous vacation, it’s your choice. But you must move through the universe by its rules.

The final test of whether or not No Man’s Sky would wring another 15 or so hours out of me came when I decided to explore a second planet. The landing greeted me with a horrid, green, radioactive mist and scorched earth. There was no animal life to be found, and trees were scarce as I peered out over irradiated seas and sprawling deserts full of rocks and valuable crystals. From that planet I jumped to one that was but an endless blizzard, followed by a planet full of tropical life. Each location provided something fresh, keeping discovery high but never dull.

So far, after these hours spent planet hopping, No Man’s Sky has shown itself to be both beautiful and chaotic. Everything is so random, from the planets you explore, to the stations and other beings you encounter in space. It seems as if it shouldn’t work, shouldn’t meld into a single game, and that the attempt should come crumbling down every second. Yet, in that maelstrom of features and information, there lies something serene about it all. There I was, a lone explorer, hurtling through the unknown and seeing things that nobody else playing the game has seen just yet. It was random yes, but it exudes some sort of purpose. This was discovered because I was there, a really good feeling you don’t always get from video games.

Of course, these are just my impressions for now. I don’t know what the next 15 or even 30 hours in No Man’s Sky hold for me. So far I’ve been pleasantly surprised by every thing I’ve stumbled upon. I’m that bumbling spaceman I’d always dreamed of becoming, and I have Hello Games to thank for that. Once I dive into the meat of its narrative and make my way closer to that mysterious center of the universe I’ll provide my full thoughts. But, for now, No Man’s Sky is everything I could’ve hoped for, even though I had no idea what to expect.