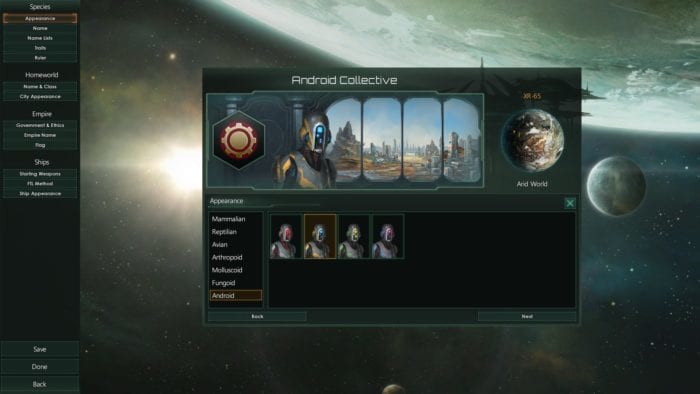 Have you ever wanted to colonize a planet, but found that your particular alien race just can’t have a sustained life on the surface? Well if you’re running into this problem, building up Stellaris’ robotic workforce might be for you. Unlike other races, robots can work on any planet and are incredibly efficient at every task you give them. All robots will cost you 50 minerals and 100 energy credits to produce, but do not require the use of food like other alien races.

There are three types of robots and each one is affected differently by both their tile output and ability to colonize planets. Robots are your basic models for production workers, as they cannot inhabit planets and have a 10% mineral output. Both Synths and Droids can colonize planets, but only the former is actually affected by happiness. To compensate for this, Synths have the largest tile output of all the robots clocking in net an even 20% across the economic board. Though if you are either planning to expand in Stellaris or wage war, robots are a great way to keep your assembly line’s going.

To actually build more robots you will want to expand into Robotic Technologies and then begin production. This can take some time so be patient and always, always consider offering robots equal rights. The farther you expand into Robot Tech, the bigger the risk is that your machines will gain sentience. This can easily bankrupt your empire if they choose to rebel, but you will not be able to disassemble or enslave them if you go down this road. You can build Slave Processing Plants if you wish you actually rob them of free will, so make sure to decide which route you want to go before producing either Droids or Synths.

After all, who doesn’t want their very own robot army to take over the galaxy? How could that possibly go wrong?