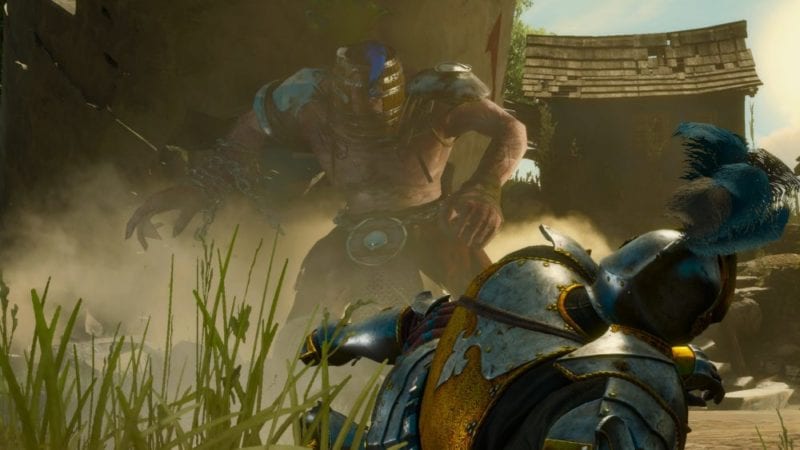 Golyat is the first boss you’ll face on your adventure into Blood and Wine’s new territory of Toussaint. He’s a powerful giant but has a pretty limited move set and some weaknesses that are easy to take advantage of. Here’s how to beat him so you can continue on your journey.

Golyat will make use of two attacks which he’ll use one after the other. First off, Golyat will try and crush you with his club with a pretty wild swing or strike into the floor. Best thing to do to avoid this is to just keep your distance, but be ready to strike at a moment’s notice. The next move that the giant will use is a spinning attack with his club. Once again, simply keep your distance if you see him beginning to spin. Of course, this would be simple enough except you have to get up close to deal some damage.

For this, you’ll want to have Quen equipped. This shield will allow you to jump in once Golyat has finished one of his moves, so you can deal out the damage with a few strikes with your sword as the giant rests. As soon as you see his club-bearing arm beginning to move a little more than it does with the flinches of your attacks, start rolling away. With any luck, you’ll manage to get a safe enough distance away from Golyat to avoid his strike.  If not, then Quen will have you and your health bar covered.

In order to finish Golyat off, simply rinse and repeat this process. His move set won’t change, and his slow movements make him a pretty easy target to take care of with the help of Quen covering you if you do happen to slash at him for a little too long. Soon enough the giant will be slain and you will be free to continue on your journey around Toussaint. Don’t forget to claim his head as a trophy before you go, though.

For more on The Witcher 3: Blood and Wine, be sure to check out our wiki.