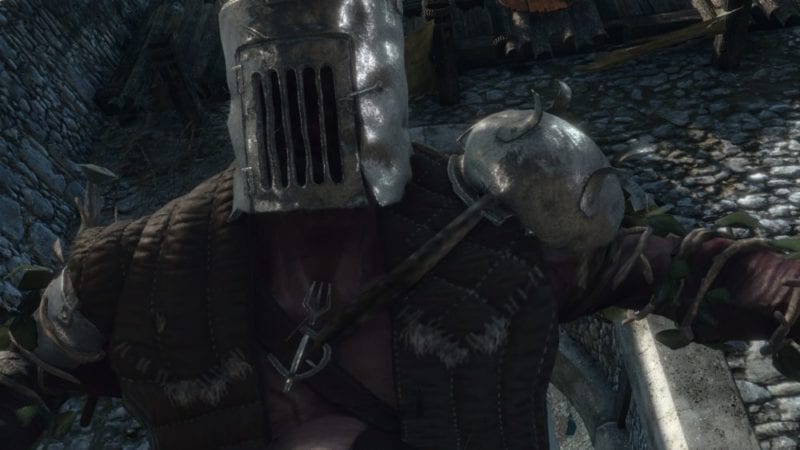 The Cloud Giant awaits Geralt of Rivia at the top of the magical beanstalk, just like in the fairy tales. Only this time he isn’t just guarding gold or seeking his stolen magic goose. The Cloud Giant exists to stop anyone trying to flee “The Land of a Thousand Fables.”

For this fight you’ll want to switch between Quen and Igni. Quen will protect you if you fail to dodge one of this boss’s wide attacks, and Igni happens to be a weakness of the Cloud Giant. There are a few attacks you need to watch out for, but they’re easy to guard against, and dodge.

One is a jumping attack that is followed by a powerful pound. A simple roll to the side will keep you out of harms way. Another is a wide attack with the hammer. It’s best to back away from this swing rather than roll to the side to prevent the off chance that it clips you at the end of the motion. The final attack involves the Cloud Giant jumping down into the clouds. This one seems scarier than it is, but you just have to keep your wits about you. When he disappears, make sure you have Quen activated (just in case), and roll out of the way as soon as his shadow appears below you.

You may have noticed when you entered this area that there are piles of metal that get struck by lighting every few seconds. These are very dangerous if you touch them, but they’ll also help you end this fight a lot quicker than if you fought the boss head on.

While you don’t want to touch these things, you definitely want to stay near them. Thanks to the Cloud Giant’s wide swings, it’s easy to get him to strike one of these structures with his hammer. When he does, he will be stunned for a few seconds, unable to defend himself. Simply cast Igni then go to town with your blade. If you really want to speed things up, pour some Ogroid Oil onto your weapon and watch the damage pile up.

You can finish this giant in about three goes using this method, without ever suffering a scratch. It even works against his dive attack when he goes into the clouds. Just race to a structure and wait for his shadow to appear underneat, he’ll hit it every time.

One thing to keep in mind though, is that a charge on one of these structures doesn’t last forever. There are a few around, so it’s best to go to one that isn’t yet glowing and wait a few seconds for it to be struck by lightning. This will save you the headache of having its charge run out before the Cloud Giant takes a swing.

Before you know it, you’ll be standing on the monster celebrating your victory.

For more on The Witcher 3: Blood and Wine, be sure to check out our wiki.