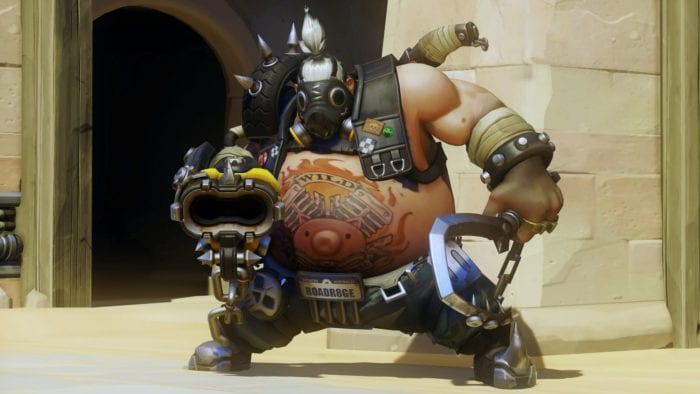 For those of you looking to do some serious damage on the battlefield without having to hide behind a giant shield, Roadhog may be the choice for you. This rough rider is a fantastic tank for both new and advanced players, offering users the ability to not only tank damage but completely disrupt enemy positions.

One of the most important things to note with Roadhog is that he is a tank that doesn’t need to just sit on a point. While it’s always important to play the objective, Roadhog thrives in close quarters combat and from unique vantage points. Roadhog is not Reinhart, he probably won’t be the tank your team rallies around for one big push.

You have no way to protect your team from damage other than your own massive size, so make sure to remember that when you charge out there. That being said, his ability to heal a considerable amount of health every 8 seconds allows him to take on multiple opponents at once and emerge victorious.

When a match starts, try to make your way through the side streets and various buildings as you want to either get parallel or behind the enemy team. This is mainly because Roadhog is one of the biggest targets in the game, so snipers can easily kill you or seriously maim you before the fight even starts. Always use the territory to your advantage and try to force all of your fights to be in close quarters, as his primary weapons has the ability to one or two shot a character.

Your main tactic, however, will be using the hook to reel foes in and finishing them off with the Scrap Gun. This is your bread and butter. Almost every one of your engagements should open up with a hook as it both stuns and draws the person into point blank range with you. For characters like Zenyatta and Tracer, this usually means certain death for them.

Gaps are also your best friend since the hook will completely wipe any momentum that your target has. Utilize this and Roadhog’s massive size to your advantage, so you can hook enemies to you and just let them fall into the bottomless pit underneath them. Priority targets to hit with your hook is any healer such as Lucio, Reinhart from behind, Widowmaker, and Bastion. Fun fact about hooking Bastion, you can rip him straight out of turret mode and force him into sentry mode. For everyone who is sick of being mowed down by him, consider using Roadhog to completely devastate the bot.

Understanding when and where to heal is another key attribute for a good Roadhog, as your ‘Take a Breather’ ability is on a fairly long cooldown. First off, don’t heal in the middle of combat unless you’re positive you can tank all of the damage without dying. Using this ability puts him in a very vulnerable state and characters such as Reaper can easily kill you even if you’re recovering health. Make sure you have some cover when deciding to heal and snipers don’t have a line of sight on you. Nothing’s worse than healing and instantly losing it thanks to a well-placed headshot.

Typically after battles or if you decided to step out and soak some damage for the team are good choices when to heal. If you’re completely in the fray, try healing once Roadhog is at around 150-200 health as that can allow you enough life to get to cover and not be shot trying to save yourself. Also don’t be that person and take the health drops lying around. You can self-heal a considerable amount, your teammates can’t. Only use the medical drops when completely necessary.

Finally, Roadhog’s ultimate at first glance may seem to be completely counter to his entire play style. Whole Hog fires like a shotgun, yet forces people away from you and has some seriously rough recoil. Yet, this isn’t a damage heavy ultimate but one you use to completely disrupt the enemy team and throw them off the point.

Try and save your ultimate for when you’re either behind an enemy team, have trapped people in a small room with you, or if a group is moving precariously along a cliff face. Knocking enemies off of the map is one of the best ways to use this ability, as it gives a skilled Roadhog the ability to force multiple targets into a pit before they can react. Just try to not let its recoil get the better of you, always force it to the middle of your screen for maximum effectiveness.

Roadhog is a character meant for breaking enemy formations and pulling troublesome characters into combat. Make sure to always stay in close quarters and hook away enemies that may be giving your teammates some trouble. If you space out your heals and are smart about using your ultimate, then you may ride eternal, shiny and chrome!

Roadhog’s primary weapon is a scattergun that has two modes of fire. Your standard attack will fire much like a shotgun while the alternate fire launches a ball of scrap a few feet before erupting. This is not a distance weapon at all, so try and avoid any sort of medium to long range engagements the best you can.

The second part to your wombo-combo, make sure to always be using this when you begin a fight with someone. It has really good range and does 30 damage per hit, so a single shot from your Scrap Gun will typically end squishier characters. You also get to feel like Mortal Kombat’s Scorpion, which is always a plus.

You will heal 300 hp per use of this ability, so make sure to always keep an eye on your health. With an 8 second cooldown, always make sure you’re in a building or cover before you begin. Roadhog cannot move while using it, so always be careful before healing up.

Use this ultimate to disrupt and scatter the enemy team in various directions. Pushing people off of cliffs is always fun, but pinning them into corners with your death machine is incredibly satisfying. Trying using Whole Hog to force entire teams off of capture points for maximum effectiveness.

Roadhog is a ruthless killer with a well-earned reputation for cruelty and wanton destruction.

After the Omnic Crisis, government officials gifted the Australian omnium and the surrounding area to the omnics that had nearly destroyed their country, hoping to establish a long-term peace accord. This arrangement permanently displaced Mako Rutledge and a large number of the Outback’s residents, a scattered collection of survivalists, solar farmers, and people who just wanted to be left alone.

Furious over the loss of their homes, Mako and others turned to violent rebellion. They formed the Australian Liberation Front and struck against the omnium and its robot population to take back the lands that had been stolen. Events continued to escalate until the rebels sabotaged the omnium’s fusion core, resulting in an explosion that destroyed the facility, irradiated the region, and littered the Outback with twisted metal and wreckage for kilometers around.

Mako watched as his home became an apocalyptic wasteland, and he was forever changed.

Adapting to his environment, he donned a mask and took to the broken highways of the Outback on his ramshackle chopper. Little by little, his humanity was forgotten. The last vestiges of Mako faded away and the ruthless killer Roadhog was born.