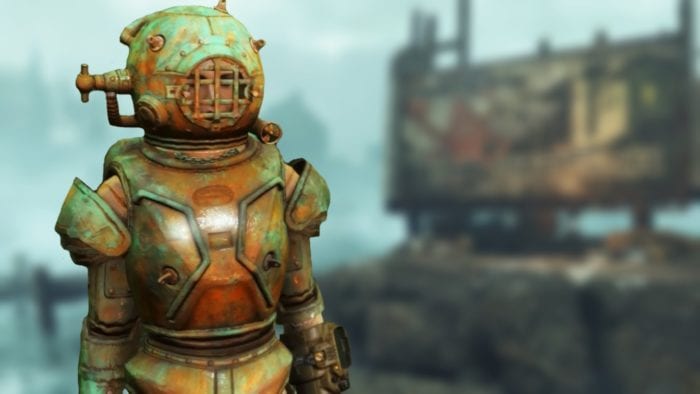 Fallout 4: Far Harbor brings players to an island off of the coast of Maine. Naturally, that means you’ll be dealing with a bit of irradiated water during your new journey, and nobody likes that.

Thankfully, there’s a brand new set of armor called the Rescue Diver Suit, and it allows you to breath underwater and take no damage from radiation. Yes, the Aquaboy/Aquagirl Perk (found under Endurance) can provide the same abilities, but it will cost you a few points of leveling Endurance up, then purchasing the skill. But that perk doesn’t make you look as cool as this set of armor does.

To obtain the Rescue Diver Suit, you’ll have to complete one of the optional objectives in the quest “The Changing Tide.” This quest is given to you by Brooks in Far Harbor and simply tasks you with helping a few people around the town. While you’ll have to help Bertha and Mitch, one of the optional NPCs, Captain Avery, is the one you can’t forget. Helping him is what earns you this stylish set of armor and will keep you swimming safely.

You’ll have to complete several quests in order to gain access to “The Changing Tide,” and subsequently the Rescue Diver Suit. When you play the second story quest, “Walk in the Park,” you’ll eventually receive a side quest called “Living on the Edge.” This quest tasks you with helping two people who each end up giving you a quest of their own:

Upon completing these two Far Harbor side quests, you’ll gain the “Rite of Passage.” Once that one is complete “The Changing Tide” will begin and you’re close to your shiny suit of armor.

For more Fallout 4 guides, including some for Far Harbor, be sure to check out our wiki.