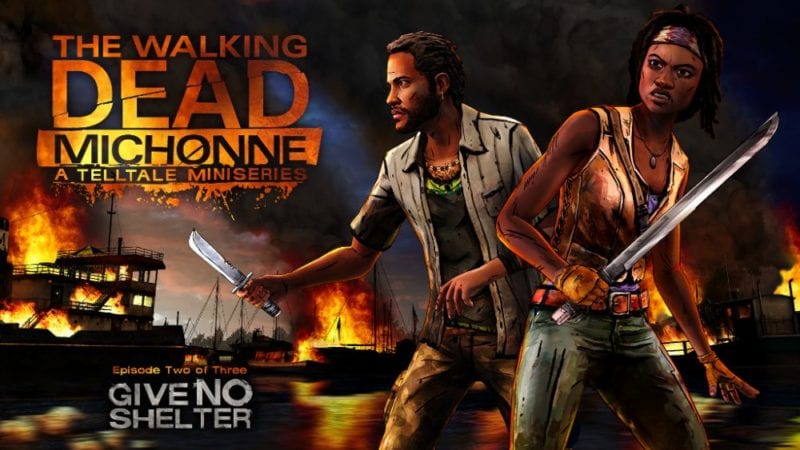 The Walking Dead: Michonne, Episode 2: Give No Shelter on Xbox One

The Walking Dead: Michonne had a bit of a slow start, there’s no doubt about that. Now that the supporting cast has been established, things have begun heating up immensely.

In Give No Shelter, Michonne and Sam must escape from their imprisonment at Monroe, with or without the help of others, depending on how you play. The pacing of this episode is much better than its predecessor, probably because you’re familiar with the new faces around you now. You know who to trust (or who you think you should trust, anyway), and once the action starts it really doesn’t let up until the “next time” stinger is playing.

Michonne continues to persevere through every hardship that comes her way, with companions making sacrifices and helping her along the way. It’s difficult to express how meaningful some of these moments are without delving into spoiler territory, but suffice it to say that your jaw will drop at least once during Give No Shelter. This is not a statement made lightly.

The story still feels very linear and less affected by choice than previous Telltale titles, but now that the game has found its footing, it begins to feel like the right approach. What created a problem in episode 1 fits much better in the storied framework of episode 2. With the narrative gaining traction and the pace picking up, this feels like episode 2 of a normal 5-episode series from Telltale. Doors continue opening that seem unlikely to shut in the one remaining chapter.

It will be interesting to see how Michonne’s little side story wraps up in the finale, especially if it’s as short an episode as the first two. It’s a shame that the length of each episode is so short, because it all stops when you just want it to keep on going.

At the end of it all, however, episode 2 of The Walking Dead: Michonne is brutal and unforgiving in all the best ways. Our heroine struggles not just in her present predicament, but also in the past with the loss of her family. She’s running from pursuers and inner demons, all while trying to find herself and her reason for persevering. Here’s hoping she does just that in episode 3, What We Deserve.