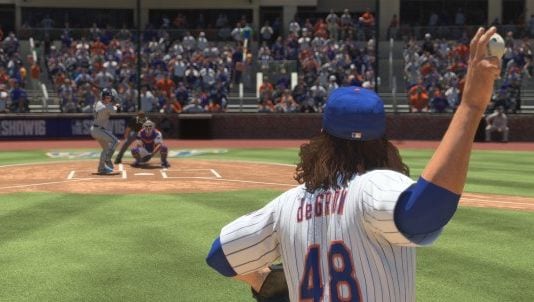 Returning to MLB The Show 16 this year is the default pitching interface: the Meter. Veterans to MLB The Show 16 should be familiar with Meter pitching as it has been in the game for a number of years now. However, newcomers or players that haven’t touched a baseball game in years may have a small adjustment period until they get used to how pitching is conducted.

Meter pitching seems to be the most popular as it’s the default option. First, select the pitch that you want to throw. The pitches are always ordered from most to least effective depending on that player’s rating with the pitch. Next, select where you want to throw the pitch with the X button. Note that once you select the pitch you want to throw, the game will show you a trajectory of how the ball will move (which varies from pitch to pitch). When you hit X, hold it down and a white line will move up towards the yellow/red side of the meter to charge up the pitch’s power.

The longer you hold the pitch, the more velocity and break it will have, but it will eat up more of your pitcher’s stamina and will be harder to control. Let go of the X button to select the power and get ready to hit it again to get the control right.

If your pitcher is getting tired or losing confidence (throwing lots of walks, drawing lots of hits, blowing a big spot), you’ll have a harder time controlling your pitch. On the flip side, if your pitcher is confident (striking batters out), you’ll get bonus control (a bigger yellow line) as well as a ratings bump to your specific pitches that you have been using.

The other pitching interfaces are Pure Analog, Classic, and Pulse which players can use as well. If you want the strictly easiest interface (that just goes completely based off of your pitcher’s stats) choose Classic, however that also gives you the lowest amount of control as all you can do is hold the X button down for more or less velocity vs. control. Pulse is similar to Classic where it is very simplified. The main difference with Pulse is that you have a pulsing reticle that you want to keep as small as possible when you place your pitch, as that controls where the ball can go. Finally, Pure Analog is similar to Meter, except instead of using the X button, you use your analog stick. Depending on your skill with it, some players might prefer the analog stick to using the X button, but this is purely based on preference.

Overall, what ends up probably being the easiest pitching interface to master (while still giving you enough control) is probably Meter, and it is the interface we recommend for beginners that have a desire to improve in MLB The Show 16.