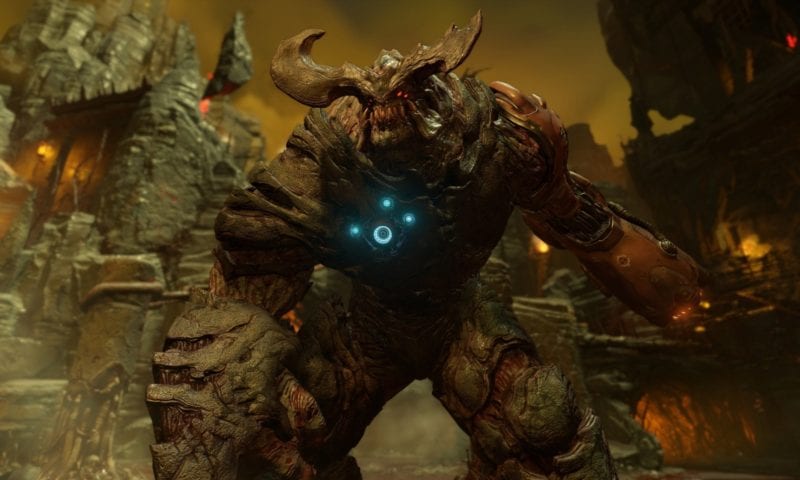 With the game’s closed multiplayer beta only days away, Bethesda can’t help but show off the brutal awesomeness that’s filling Doom to the brim. The most recent reveal centers around the finer points of the game’s multiplayer: the demons you can play as, the power weapons you can use to dismember your enemies, and the power-ups that make it almost not seem fair.

For a brief look at each, check out the trailer below.

Bethesda is quick to point out that the demons you fight as in the multiplayer are not just reskinned, or even similar-but-more-powerful, versions of the standard Doom marines. Not only are there multiple types of demons, but each is truly its own beast.

A vicious melee attacker, the Baron of Hell for instance, is massive and comes ready to lay down the pain with his unique ground pound ability. The Revenant on the other hand is all about speed and agility, where the aim is to outmaneuver its foes and overwhelm them with dual missile launchers. The Revenant even has the ability to glide, clearing large gaps without a problem and raining death down to the poor marines below.

Getting even crazier, there’s then the Prowler and Mancubus. The Prowler can see through walls, jump and grab just about any surface, and can even kill marines in a single hit. On the far other side of the spectrum is the huge, shambling Mancubus. Described as a “portly powerhouse,” it can send a barrage of rockets down on unsuspecting foes and won’t go down without a hefty amount of damage.

Turning to weapons though, there are some that are just too powerful to allow in everyone’s arsenal. So as a result, Doom will have power weapons, special pick-ups, like the Guass Cannon, Chainsaw, and BFG 9000, which will dramatically turn the tide of the battle.

But finally, what use would any of this be without ridiculously powerful power-ups. Invisibility, and regeneration are both self-explanatory. But Bethesda also teases haste, a power-up that will make you run faster and even up your fire-rate, and Quad Damage, a power-up that simply makes everything that much more deadly.

In the past couple weeks, not only has Bethesda showcased the nine maps making their way to Doom, but also the six different multiplayer modes. The game’s closed beta, exclusive for those that bought Wolfenstein: The New Order back in 2014, will launch Mar. 31, and run through Apr. 3, while the full game is set to hit store shelves May 13.

What do you think of how Doom’s multiplayer is shaping up? Let us know in the comments.