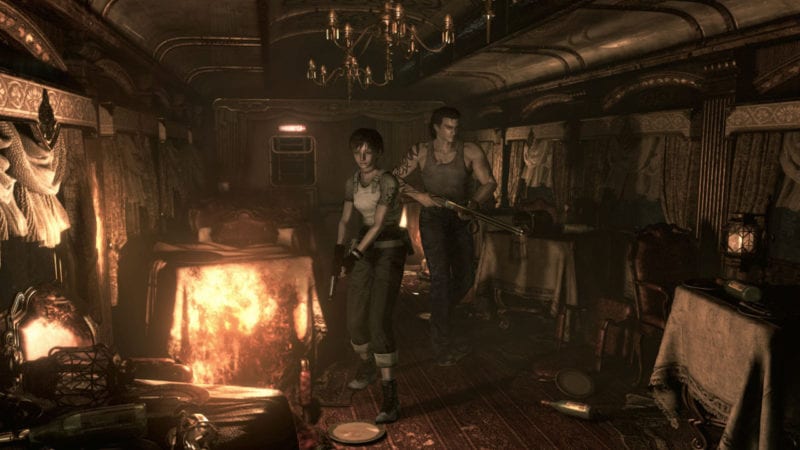 Barely an hour in and there’s already a boss fight? Calm down there, Resident Evil 0. If this is your first time playing RE0, chances are you’re going to be a little disoriented trying to get used to the team mechanics and the fact that you don’t have an item box. So when this giant scorpion guy shows up, it’s probably going to seem a little intimidating. Thankfully, he’s actually a complete pushover once you figure out what you’re supposed to do.

Before the fight, you’ll want to make sure you grab all the ammo you can from Rebecca through the service lift. Another tip: make sure to reload your gun through the inventory menu. You don’t want to get caught with an empty clip in the middle of a boss fight.

First up, the boss will drop into the train once you grab the ice pick from the second floor and head back the way you came. Immediately after the cutscene, run Billy back to the door you just came in from but don’t go through it. Turn around and aim your gun downwards, and keep a close eye on what the scorpion does. The scorpion will inch towards you and attempt to hit you with its giant claws. Each time the scorpion raises its claws, shoot it once. If you timed it correctly, the scorpion should recoil in pain with each bullet. All you have to do is watch for its raised claws, aim downwards and shoot, and repeat this process until the scorpion is dead.

When you’ve finally shot it enough, the scorpion will let out a very loud wail, signalling the end of the fight. Once this happens, run Billy through the door behind him. The scorpion will perform a massive claw swipe before dying which could kill you if you’re already low on health. If Billy’s health is still in the green, you’ll be able to survive, but it’s much safer to just head back through the door, and then coming back in once the scorpion is down.

To make this fight easier, you could also grab the hunting rifle from the previous room with the first aid spray and ammo if you have the space for it. But if you’re having a little trouble managing your inventory, the normal handgun will work just fine.

After the scorpion is dead, examine the corner of the room to obtain the panel opener.