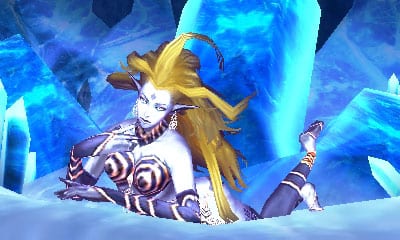 Shiva will be one of the first eidolons you fight in Final Fantasy Explorers after defeating Ifrit. Like Ifrit, Shiva is much tougher than the other enemies you’ve encountered in the quests so far and is a big step up in difficulty from Ifrit and arguably Ramuh, as well. This is because Shiva’s attacks not only hit very hard, but can also freeze you in place. More often than not, when you’re frozen, Shiva will follow up with another attack that if you’re not dead at that point, will leave you critically injured. Shiva has one major flaw in her attacks, though, that if you can take advantage of, it will lead you to victory.

First thing’s first, you’re going to want to make sure you have a full party, preferably of human-controlled characters. We highly suggest hopping online to get this done as it will make the fight much easier. A balanced party of explorers consisting of a tank, healer, and two damage dealers is best. If you want/need to use monsters, make sure they are at least level five or higher, otherwise they will be done for with one or two shots of Shiva’s attacks and you’ll pretty much be soloing it.

The key for fighting Shiva in Final Fantasy Explorers is to stay the heck away from anywhere in front of her unless you’re a Knight and can deflect her attacks. Many of her attacks including Snowy Storm, Heavenly Ice, and her ultimate, Diamond Dust, will hit explorers that stand in front of Shiva. Just about anytime Shiva hits you, you’ll be frozen, so be careful. Ranged attackers are best for this fight as they can stand away and to the side, and dodge most, if not all, of her most powerful attacks. Melee attackers can do fine as well, but they need to stay off to her side or behind her.

Shiva will often dash across the map (called Permafrost) and freeze anyone she comes into contact with. Again, as long as you’re not in her line of sight in front of her, you’ll be fine and can avoid her easily. Having a Knight for this fight is nice as her attacks are quite predictable and the Knight can simply deflect and keep Shiva in one place. The Knight just needs to be very careful to not get caught by Diamond Dust, as it’s almost guaranteed to one-hit KO anyone that’s fighting Shiva at a normal level. You can deflect it as the Knight, but don’t miss or else you’re toast.

If you’re fighting with monsters, try to play it safe when/if they die and definitely stock up on Potions/Phoenix Downs to revive in case you get knocked out. Obviously, if you’re going solo, there won’t be anyone to carry you through if you go down. Final Fantasy Explorers is very much a team-based game.

As far as Crystal Surges go, opt for the ones that maximize your damage. The quicker Shiva goes down, the better. Once you realize that it’s easy to dodge most of her attacks, there is no reason not to go all-in and take her out quickly. If things go awry, look for a Crystal Surge that can help you regenerate health.

As long as you remember to stay away from the front of her at all costs, Shiva isn’t too tricky. She does have two AoE moves Winter Wonderland and Rage that will hit anyone within a radius around Shiva. When she’s getting ready for that, everyone needs to run away (unless you’re a Knight and choose to deflect it). Stay off to her side or behind her as much as possible and pay attention to where she’s facing when she dashes around the room.

That does it for Shiva! Make sure to check our Final Fantasy Explorers Wiki Guide for more tips and tricks!