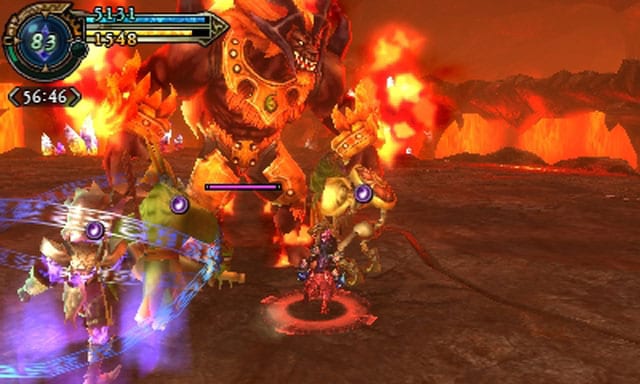 Ifrit is the first eidolon you’ll get to fight in Final Fantasy Explorers. If you thought the monsters you’ve been hunting up to this point were easy, you’re going to have a nice surprise when you face Ifrit. Before embarking on your journey, I’d advise fusing a party of three monsters to bring along with you. You can do this by bringing monster atmaliths to the monster lab in the town hub.

Once you’ve fused your three monsters, you’re ready to hunt down Ifrit. You can get to him by heading to the right of the world map, through the volcanic caves.

The real challenge in this fight is the fact that Ifrit has a ton of health. That, and he packs much more of a punch than anything else you’ve faced in the game so far. The first thing to note is that whenever Ifrit jumps into the air, you’d be wise to run off as far as you can. You’ll have about a second before Ifrit lands back down with a ground pound, damaging anything near him.

He also has two regular attacks, Wallop and Fist of Fire. These two attacks are pretty easy to dodge; the name of the attack will appear at the top of the screen when he’s about to strike, and that’s your cue to run to his side to avoid getting hit. He also has a move called Fiery Advance, where he will perform a straight dash, leaving a trail of lava behind him. When he does this, I advise making use of his recovery time to heal up.

Ifrit’s most dangerous attack is the iconic Hellfire move. Whenever Ifrit gathers his power to use Hellfire, circles of fire will appear beneath your feet before exploding into pillars of lava. When he does this, just run around the arena in circles to avoid getting hit. Ifrit can also cast regular fire spells when you’re a distance away, but this can be easily dodged as long as you stay on the move.

Your party of three monsters will inevitably die during the fight, but don’t worry; they’ll respawn and rejoin the fight after a minute or so. Be sure to keep an eye on your AP, and make sure to trigger the Crystal Surge whenever the notification pops up. As long as you have the Cure spell, or a healthy supply of potions, you shouldn’t have much problem surviving the fight.