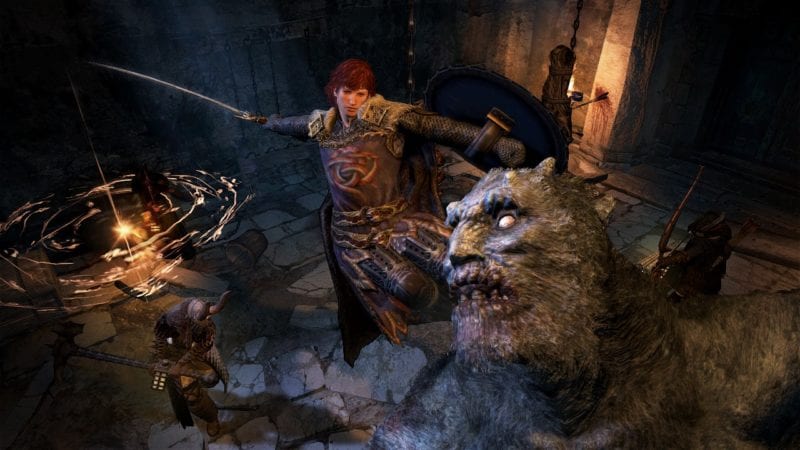 Dragon’s Dogma: Dark Arisen has one seriously large world. Gransys is huge, and it takes forever to cross on foot. When you throw in Bitterblack Island you have a daunting prospect before you. Just how the hell do you get back to where you want to be?

Dragon’s Dogma doesn’t exactly make this easy. The devs want you to face the horrors that await out in the wild. Because of that you’ll have to rely on your own two legs to get you from place to place for a large portion of the game, but eventually you will get some traveling assistance.

There are two types of stones in the game that will allow you to fast travel, and one of them can work in tandem with another item.

One of the stones that will help you get around in Dragon’s Dogma: Dark Arisen is the Ferrystone. This item is a one-time use consumable that will instantly transport players back to Gran Soren. It’s useful since Gran Soren is one of the main cities in the game and you will undoubtedly have a lot of work to do there. But you may be wanting to travel to other locations as well.

That’s were Portcrystals come into play. Gran Soren has a permanent one which is why initially it’s the only place you can fast travel to in Dragon’s Dogma. There are two more located in Dark Arisen. There is one outside of the starting area Cassardis, and one more by Bitterblack Isle.

There are portable Portcrystals as well. These are similar to the others, with the main difference being that you can pick them up and move them elsewhere. Only five can be found in game, and you are able to purchase more during New Game Plus (from Monebank for 200K Gold). The five locations you can find a portable Portcrystal are:

Note that you can only place Portcrystals out in the open. So if you’re looking for a quick shortcut into dungeons you’ve been exploring, think again. There is no way to make this game easier.

You should also be aware of the fact that you will be able to obtain an Eternal Ferrystone (unlimited uses) after completing the first quest for the Duke when you arrive in Gran Soren on the PC version. This item is obtainable on PS3 and Xbox 360 if you transferred a save file from the original Dragon’s Dogma into the updated Dark Arisen.

A Liftstone is a lot like a Ferrystone except it only works within one specific area. These will take you solely to the entrance of Bitterblack Isle, and only if you’re already within its labyrinth. It’s a way to get the hell out of dodge while you still have a bit of life to cling to. And, like the Ferrystone, a Liftstone is somewhat rare in Dragon’s Dogma: Dark Arisen.

You can find one in random chests located throughout the island, or on the resting bench in both The Warriors’ Respite and The Arisen’s Refuge. There are also a few you can purchase from Barroch. Like you, he has had his heart removed, but he just wanders Bitterblack Isle selling his wares. You can buy a Liftstone for 6000 Gold.

These are the only ways you can fast travel within the world of Dragon’s Dogma: Dark Arisen, so if you have a small stockpile of these stones, use them wisely.