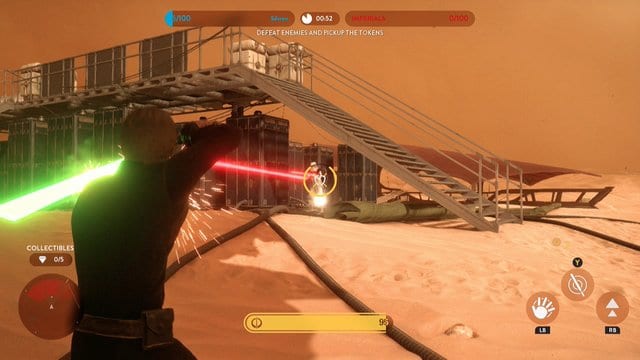 By far one of the coolest features in Star Wars Battlefront is getting the opportunity to play as some of the biggest heroes in a galaxy, far, far away. It’s hard to resist the urge to play as one of the most prominent Jedis of all time: Luke Skywalker. With his agile move set, powerful lightsaber attacks, and incredible force powers, it’s a good time to be a Skywalker.

The key to playing Luke Skywalker is that you should always focus on getting into the battle quickly, causing as much damage as you can and then getting the hell out. Skywalker is extremely capable of dishing out the pain, but if all infantry focuses their blasters on the Jedi, there’s no escape.

The key to being undetected on the battlefield? Deactivating your lightsaber, otherwise you’re a beacon to all attackers. With a press of the D-Pad, or keyboard, you can deactivate Luke Skywalker’s jade colored lightsaber. This way, Luke is difficult to detect, or snipe on the battlefield.

Luke’s lightsaber makes him stick out on the battlefield.

Luke Skywalker’s most devastating attack has to be his Force Push ability. He unleashes a powerful Force blast to anyone standing in front of him. It can easily clear out a hallway or send infantry on the battlefield flying. It’s the best AOE move of all of Star Wars Battlefront’s heroes. It comes out faster than even Palpatine’s Chain Lightning ability.

The best way to get into position if facing the enemy is to use Luke’s lightsaber to deflect enemy blaster bolts back at them. You can only deflect shots for a short amount of time, so just make sure to watch the ability bar when active. You must aim the reticle to an opponent shooting at Luke, this way you can direct the Stormtrooper’s shots back towards them.