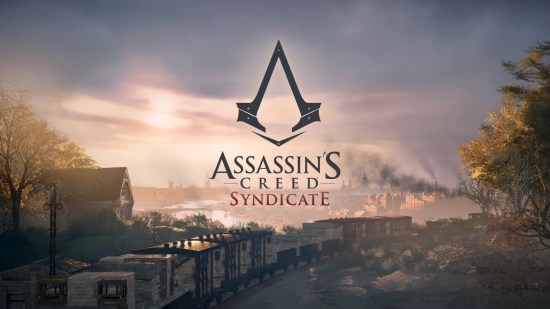 Assassin’s Creed Syndicate adds in a ton of RPG elements for players to enjoy: skill trees, different weapons, and outfits that offer different perks to the player. Some of these outfits are easy to come by, and others will require a bit more work.

Since there are two protagonists, you’re going to have to work twice as hard to unlock every single outfit, but it will be worth it to look as fly as possible. Here you’ll find a list of every requirement for each of the outfits in Assassin’s Creed Syndicate. 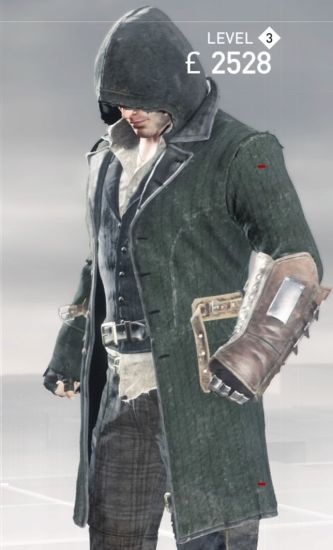 This is the outfit Jacob starts with in Assassin’s Creed Syndicate.

“Jacob has no love of flashy clothes and this standard outfit suit him well.” 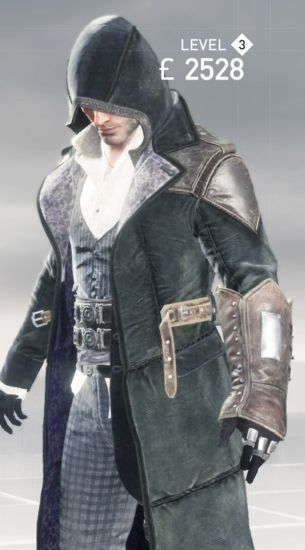 This outfit is unlocked by reaching Rank 2 Loyalty with Frederick Aberline.

“Understated yet classic, the Gunslinger pairs the spirit of an outlaw with the silhouette of an Assassin.” 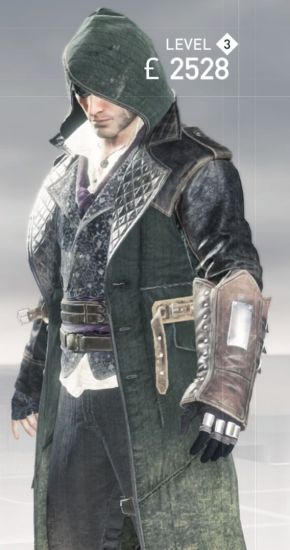 Once you complete the first Alexander Graham Bell mission (which also nets you the Rope Launcher) you will unlock this outfit for use in Assassin’s Creed Syndicate.

“Rich leather and rough fabrics capture the feel of the rugged outdoors.” 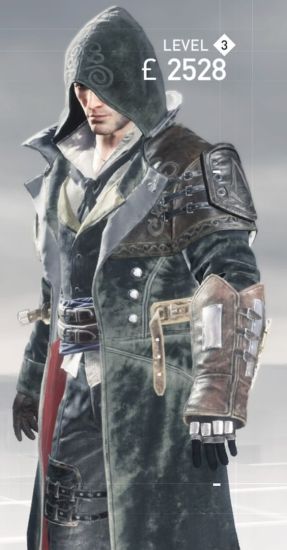 This outfit is obtained by completing the memory “A Bad Penny” which is found in Sequence 06.

“Bearing the Assassins symbol on its striking red lapel, this outfit is a testament to the skill and strength of its wearer.” 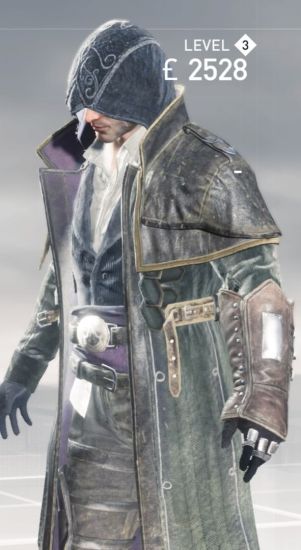 This black and blue outfit is perfect for those looking to brawl. It can be unlocked for Jacob upon the completion of Sequence 7.

“The Blackguard suit’s somber blend of blacks and blues capture the depth and darkness of a London night.”

This is yet another armor set that really ups your tool count. This one is unlocked by crafting, and the plan can be found on the rooftop of St. Paul.

This is definitely an outfit for those who love to brawl. After finishing Sequence 08, players will earn this crafting plan. 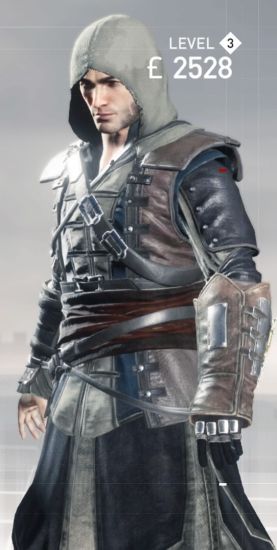 While you may not set sail in Assassin’s Creed Syndicate, there is no reason you can’t dress the part of a pirate. Unlock this outfit through the Ubisoft Club.

“For those who live by the pirate’s code, an outfit that looks the part.” 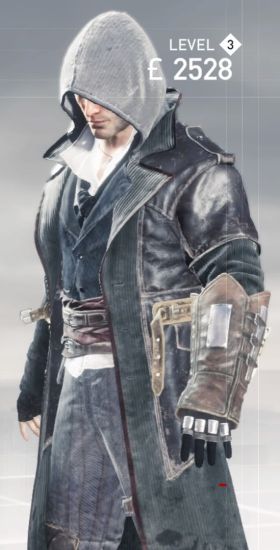 This is yet another outfit that can only be redeemed by spending credits at the Uplay Assassin’s Creeds Rewards site.

“The swagger and style of a scoundrel paired with the brute strength of a prizefighter.” 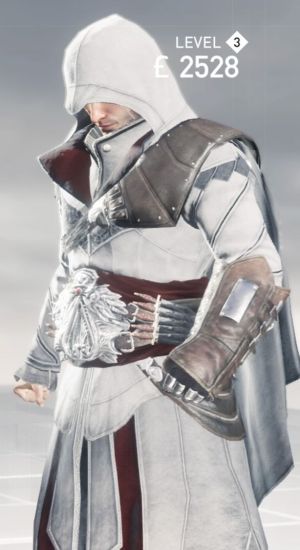 Deck out Jacob in the robes of one of the most famous Master Assassins, Ezio Auditore da Firenze. You can unlock these through the Ubisoft Club.

“The beauty of the Renaissance and the charm of the legendary Assassin Ezio Auditore da Firenze.” 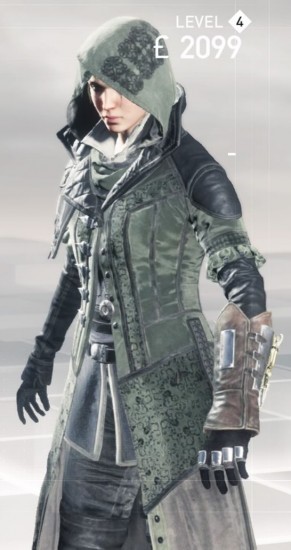 “Dramatic yet ultimately simple, this is Evie’s outfit of choice.”

Players can unlock this outfit once they experience a rift in the Animus. 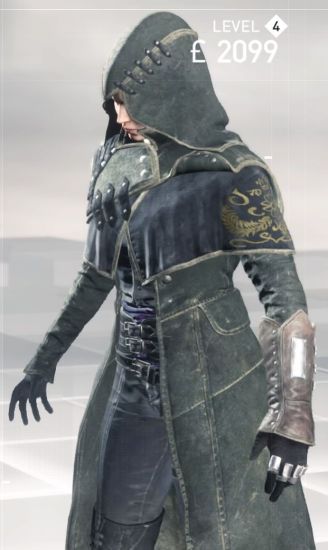 Evie will be able to use this outfit in Assassin’s Creed Syndicate after completing the memory “Play it By Ear” which is part of Sequence 04.

“The muted colors of this outfit are utilitarian, with tough leather straps and stitching evoking a bygone and brutal era.” 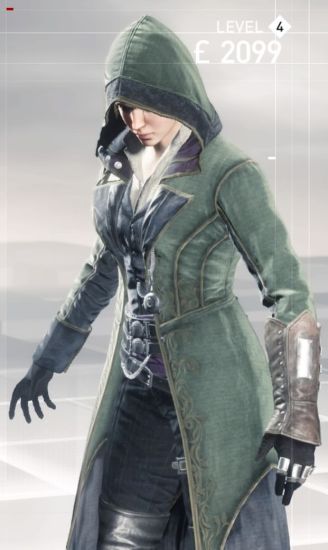 This one is unlocked after completing “A Room With a View” in Sequence 05. It has a bit more of a laid-back look when compared to her other outfits and offers the same perks as Jacob’s Ezio Outfit.

“Lady Melyne’s flair for fashion is evident in the sumptuous silks and delicate embroidery of this suit. Sewn-in weapon sheaths and holsters speak to the Lady’s other proclivities.”

Complete “A Thorne in the Side,” part of Sequence 06, and this outfit is all yours.

“To wear this outfit is to display one’s status as a Master Assassin. The sharp silhouette and striking blood red highlights are a warning to enemies that they look upon Death itself.”

This is an extremely rare set of Precursor armor that is unlocked after completing the Secrets of London side quest (which requires you to place all musical boxes in the Reuge’s Vault). 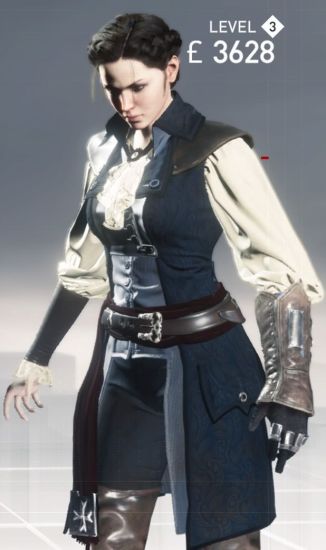 Dress the role of a female Templar, whom you may remember from Assassin’s Creed Unity, by unlocking this outfit through the Ubisoft Club.

“Add a French touch with the outfit of the noble Templar Elise de la Serre.” 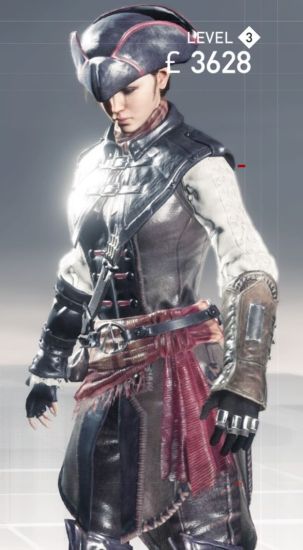 The first playable female assassin in the franchise returns in the form of an unlockable outfit. Unlock Aveline’s clothing through the Ubisoft Club.

“Channel the strong will and incredible bravery of Aveline de Granpre.”

One assassin that many may not be aware of is Shao Jun. This isn’t because she isn’t awesome, it’s that she was the protagonist in Assassin’s Creed Chronicles: China. You can unlock this exotic looking armor through the Ubisoft Club.

“Wear the proud colors of the Chinese Brotherhood with Shao Jun’s streamlined garb.” 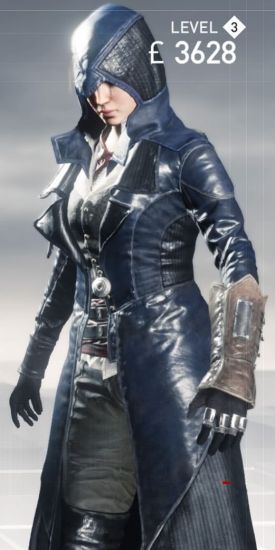 This outfit is only unlocked through the Rewards program from Uplay by spending credits you have earned.

“A simple, comfortable cut, with a contrast hood that adds flair.”

These are the outfits players will be able to don in Assassin’s Creed Syndicate. Which is your favorite? Feel free to let us know in the comments below.