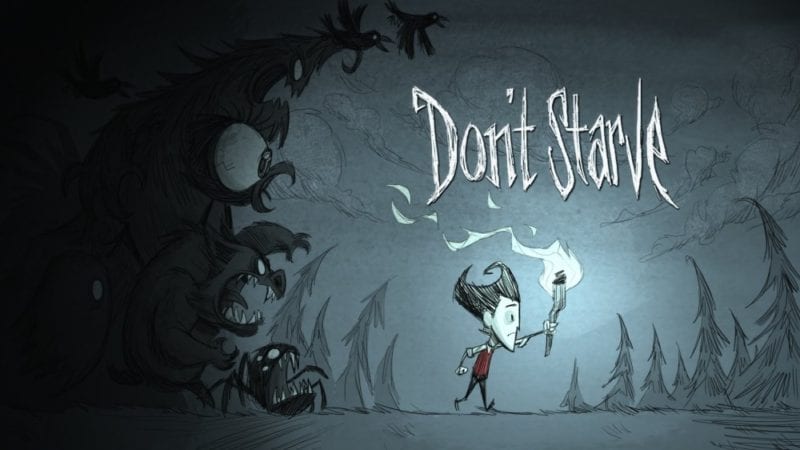 Don’t Starve is an interesting beast of a game. It takes mundane survival basics like making a fire and turns them into a compelling aspect of gameplay. Even the rather smelly task of following herds of Beefalo to pick up their glorious dung isn’t nearly as dull – or stomach churning – as it sounds. So in honor of the Don’t Starve Giants Edition, here is a quick set of five beginner tips for Don’t Starve to teach you how to survive the first month.

Collect All The Things

A survival game wouldn’t be a survival game without collecting stuff to help in survival so you can, you know, survive and stuff. Thankfully when you first fall into the world there’s plenty of resources scattered around to help your first few days go a little less deadlier.

As long as you avoid selecting the Reign of Giants DLC when starting your game, the surrounding area will be brimming with necessities. Saplings form the plate for tools like axes and picks while flint provides the meal.

Flowers can be used to restore health from unexpected conflict or made into a Garland which staves off insanity for a few days. Forests can be cut down to stumps in order to fuel early base-building. Even the pretty little butterflies can be sliced in twain to provide a tasty snack.

Make sure to harvest those berry bushes as well. A rather large and cowardly turkey-like creature called the Gobbler hides within them, devouring the berries that could be yours before running off to the next bush.

Of course you can kill it for its drumsticks but frankly, its so damn fast that early game this can be a waste of valuable time.

Have you ever found yourself totally engrossed in an activity to the point where sleeping, eating or even evacuating your bowels slips down your priorities list?

The same happens all to often – to me at least – in Don’t Starve. While all a little joke right now, starvation in Don’t Starve means a slow agonizing death.

Always keeping your eye out for berries and carrots is the easiest way to avoid a hunger crisis. Like carrying a little lunchbox, these randomly collected treats can be the difference between life and death in Klei’s nightmarish world.

Do beware of the food perishing however. Nothing lasts forever so don’t expect that handful of berries to either. Bear this in mind particularly when exploring the land. If you find yourself in a swamp or rocky landscape, food is terribly scarce.

You may think exploration is unnecessary, but when you need to find the right materials, an excursion is nothing short of paramount.

So you’ve gathered everything you can carry. You’ve bounced around the wilds making temporary fires. You’ve been followed for three days by a fluffy rabbit you just can’t bring yourself to slaughter.

Perhaps now’s the time to end this nomadic lifestyle and settle down. Then make sure you pick the right spot.

No-one really wants to live in a swampy mess of frogs and tentacles, just imagine how terrible the resale values would be. Not to mention the idea of living 10 miles from the nearest store when you’ve got no easy mode of transportation.

It just makes you shudder. Picking the right place to call home in Don’t Starve can be tricky. After all it depends on the methods you use when collecting food.

If you enjoy fishing then setting up quite close to a swamp will deliver a rather consistent source of food. For the farmers out there, laying the foundations close to a herd of Beefalo will provide a reliable source of manure and furs for winter clothing.

The most important thing to consider in choosing a place to hang your hat is to ensure it fits your needs. That and don’t be afraid to re-position a new base if you find several strong locations.

All That Glitters is Gold

Rudimentary survival in Don’t Starve can, in theory, continue forever. Cutting down trees and snatching rabbits to devour is important but let’s be honest, nothing run really happened in prehistory.

So rather than living a subsistence-based lifestyle in Don’t Starve, hunt down gold, make a science machine and then advance along the wonderful tree of science. This is where the science machine comes into play and as a result, gold.

Gold is an important component in a vast selection of advancements so finding it takes priority over almost everything. Fortunately, there are a number of ways to obtain it. First up is the obvious method of mining it out. This is totally self explanatory but if you get unlucky the nearest gold nodes can be miles over the horizon.

Gold can also be found laying around in graveyards but be sure to take precautions. Excavating the graves can lead to some wonderful resources but this can also spawn horrible enemies. If you’re just starting out, slip in, grab the gold and run for the hills.

There is a simple third way. If you can find a pig king (a huge Jabba the Hutt style Pigman) and you’re a capable chef, there’s an endless resource of gold sat on a flat rock. If you bring him suitable food, such as morsels from rabbits or fish, he will grant you one gold nugget. To find a Pig King try to find the towns of Pigmen and follow bricked paths scattered throughout the world.

Run along them singing “Follow the Yellow Brick Road” for bonus points (note: not true).

How to Survive The First Month in Don’t Starve:

Brace Yourself, Winter is Coming

As the days pass and seasons change, winter’s inevitable arrival grows ever closer. It stalks across the land and outstretches its icy claws every year. During these times food is scarce. The ponds freeze over. The fields are blighted by frost. Even the berry bushes offer no sustenance.

This is where the idea of stockpiling comes in. Food can be stored in standard chests for the winter months but it will still spoil. The dream for winter survival is using an Ice Box.

These require a piece of gold and the oft just as rare gears — items which mainly drop from Clockwork Knights, Bishops and Rooks. If you’re not able to make an Ice Box then start preparing your chests with the freshest food possible.

Certain food sources do remain during these times. The most reliable being snow rabbits. Normally you’d bait a trap with carrots but by placing the trap directly over a rabbit’s burrow will almost guarantee the little rapscallion will be caught and provide a tasty morsel of food.

Along with this, picking up a pair of shears and shaving the fur from Beefalo herds to create warm clothing is far from a bad idea.

Got any tips yourself for Don’t Starve beginners? Leave them in the comments down below.