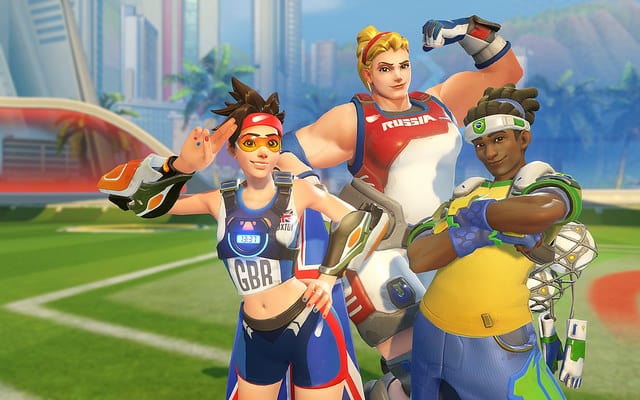 For the first time since the game’s release in May, Blizzard has added new skins, highlight intros, and more to Overwatch. This update comes in the form of the Summer Games Collection, which is apparently the first of many seasonal events that Blizzard has planned for Overwatch.

Aside from new skins, the update also adds a new gamemode, called Lucioball. The game mode sounds strikingly similar to the popular game Rocket League, as it pits two teams of Lucio against each other trying to score goals with the ball in the middle of the field. The mode changes up a lot of how Lucio usually functions, as his primary attack is replaced by his melee, so that he can “dribble” the ball. His speed boost still works, but only on himself. His secondary pulse blast still works, and sounds like the main way that players will be bouncing the ball across the court.

The new skins and game mode won’t last forever, though. The event starts today, and ends on August 22nd. New cosmetic unlocks will of course be permanent, but it sounds like Lucioball won’t be around forever, so you should have your fun with it while you can.

Unfortunately, not ever hero in Overwatch has a new skin in the Summer Games Collection, but a good number of them do. The heroes with at least one new skin are D.VA, Genji, Lucio, McCree, Mercy, Torbjorn, Tracer, Widowmaker, and Zarya. It’s worth noting that in the case of Lucio, Tracer, and Zarya, their new skins are all Legendary, and have two variants. My personal favorite is Zarya’s weightlifter skin, which literally adds barbels to her gun.

Some other highlights are McCree’s “America” skin, which cloak him in the USA flag, and make him into a full-blown patriot. His revolver also gets a fresh coat of American paint, which will surely look good under the backdrops of Route 66 and Hollywood. Tracer’s “Sprinter” skins are also very cool, and change up her look quite a bit.

Though what you’ll be seeing the most is your hero’s respective gun, and the new skins don’t disappoint in that regard, either. Tracer’s pistols have a fresh coat featuring colors that no other skin has, and the same can be said for Torbjorn’s bright blue and Widowmaker’s red, white, and blue getup.

This seems like a very promising seasonal event, and hopefully Blizzard can keep up this momentum with more new stuff in the future. Maybe we’ll see a Holloween or Christmas update later this year? That would be great, but my biggest hope is a Donald Trump skin for Roadhog and a Hilary Clinton skin for Mercy come November.

And if Blizzard is willing to add new game modes for seasonal events, that really opens up Overwatch for all sorts of cool stuff. Perhaps they’ll go the Destiny route and add some sort of racing mode (and hopefully make it good), or maybe a tower defense mode centered around placing Symmetra’s turrets. The possibilities are fairly endless here, thanks to the wide variety of characters that Overwatch employs.

An all-white look for Genji with some slick black and red accents.

This is the first of Lucio's two new legendary skins.

And here's the second skin, which is just a simple color variation of the previous skin.

This is a personal favorite. McCree is all Amercia'd up, and he looks ridiculous.

This skin has Mercy representing her Swiss culture, but is also completely styling and pretty different from her other color variants.

Another personal favorite, this Torbjorn skin has him sporting a bright blue and yellow suit.

This is the first of Tracer's two new legendary skins, which depicts her as an Olympic sprinter, complete with a UK flag as a cape.

The second of Tracer's two new legendary skins. This one is a color variation of the previous, but also changes her cape to that of the official logo for the Rio 2016 Olympics.

The first of Zarya's two new legendary skins, this one depicts her as a champion weightlifter with blonde hair and a ponytail.

The second of Zarya's two new legendary skins, this one is a color variant of the previous, with a focus on her Russia-representing colors.
Comments
Continue Reading
Related Topics: