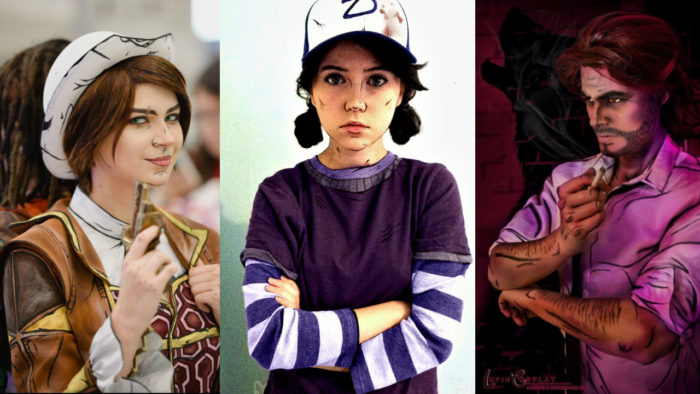 Telltale’s numerous series are full of fantastic characters fans can use as their inspiration for cosplaying. We have collected the 15 best Telltale cosplays found anywhere online for your viewing pleasure.

One thing that all Telltale cosplayers seem to have in common is a skill in making themselves seem cel shaded. Much like the comic book aesthetic, cel shading makes 2-D objects appear as if in three dimensions by adding exaggerated shading lines to both clothing and body parts. By using this tactic in their cosplays, the resemblance can get pretty uncanny.

The list of Telltale’s episodic series include: The Walking Dead, including Season One, Two, and A New Frontier, Tales from the Borderlands, A Wolf Among Us, Jurassic Park: The Game, Game of Thrones, Minecraft: Story Mode, The Walking Dead: Michonne, Batman: The Telltale Series, and many more.

Telltale’s newest series set to release later this year will feature the Guardians of the Galaxy IP in five episodic episodes.

It seems from the cosplays collected that the most popular series to mimic seem to be either The Walking Dead, A Wolf Among Us, or Tales from the Borderlands. Arguably the most impressive cosplay is that of Bibgy Wolf, with the image of the cosplayers almost looking like a direct screenshot from the game at first glance.

The Clementine cosplay is equally as impressive, with her exact outfit, bloodstained hat, and small puffs of black hair (as cut off by Lee to protect her from the grabbin’ walkers) she looks like the real-life materialized of the cutest little zombie apocalypse participant.

Telltale’s Wikipedia page reads “Telltale Incorporated, doing business as Telltale Games, is an American independent video game developer and publisher founded in June 2004. Based in San Rafael, California, the studio includes designers formerly employed by LucasArts. Its business model revolves around episodic gaming and digital distribution, and it is best known for its various adventure game series based on popular licensed properties.”

The Walking Dead A New Frontier’s first episode released at the end of 2016, following a much older Clementine with new companion Javier. A full disc pass will be available in February 2017 that allows a complete purchase of all episodes to be downloaded at the time of their release later in the year.

It’s clear why cosplayers are drawn to the games in the Telltale series library. Besides being intriguing characters from a narrative aspect, they all have a specific appearance to them due to the cel shading that is recognizable to the series.

The cel shading look can be achieved by adding dark pigment, such as eyeliner, to various areas of your face that would usually be masked by shadow. Characters in these series who have beards also use the dark lines to represent hair, so small and repetative lines of black all around the chin can perfectly replicate the beard of characters like Bigby Wolf or Lee from The Walking Dead.

For more cosplays, be sure to stick to Twinfinite where we search out and collected the best, dressed cosplayers for nearly every game series out there.