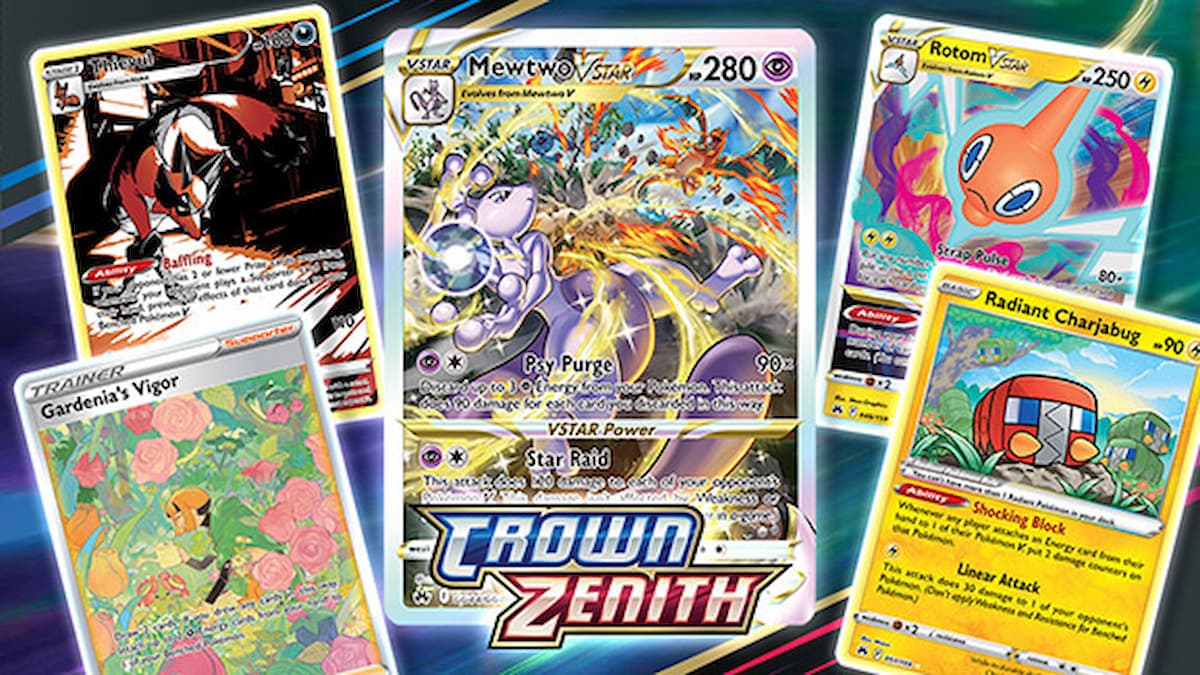 Crown Zenith, the final Pokemon TCG Sword and Shield set, is chock-full of beautiful full art cards and special arts — some of which will be quite expensive. You’re probably wondering what the best cards for collecting or deckbuilding are, so here’s everything you need to know about the best cards to pull from Crown Zenith.

Plenty of characters from across the Pokemon anime and games like Legends: Arceus are featured in stunning new artwork alongside new versions of powerful cards. There will be a variety of sealed product releasing over multiple months, so grab your favorite tin or box when you see it on store shelves.

One of the coolest arts in Crown Zenith, Mewtwo is shown in an epic showdown with Charizard that makes it a great find for collectors. The secret rare Mewtwo VSTAR from Pokemon Go is worth over $40, definitely a sign that this new art will bring in the dough for anyone lucky enough to pull it.

This card isn’t viable in the Pokemon Standard format because it has an underwhelming VSTAR Power and its main attack is hard to pull off consistently, so Mewtwo VSTAR is a great pull for collection purposes only. This Pokemon has a long history in the Pokemon TCG, and this iteration may continue the tradition of rare and expensive Mewtwo cards.

Pokemon has outdone itself with Fusion Strike alternate art cards, and this Elesa’s Sparkle is no exception. The colors are bright and vibrant with cute Pokemon balloons in the background. This card is competitively viable in Mew VMAX decks because it accelerates Fusion Strike Energy into play for high damage attacks early in a game, which is sure to bump up the price. The Crown Zenith Elesa’s Sparkle art looks great with the alternate Mew VMAX and could be quite popular at large tournaments.

The Fusion Strike Mew VMAX has started popping up again due to cards like Aerodactyl VSTAR doing well at Regional Championships – Fusion Strike Energy can protect Genesect V from having its ability removed by Ancient Star.

As always, you’ll want to watch our for Drapion V in your opponent’s deck because if it catches you by surprise you’re going to have a rough time.

Radiant Eternatus has the potential to shake up the Pokemon TCG Standard format because it can skip the evolution from Pokemon V to VMAX, and it could be one of the more expensive cards in the set. Additionally, this card’s art features shiny Eternatus, which stands out from other cards in Crown Zenith: this is an all round great card to pull.

Duraludon VMAX could be the perfect partner for this card because it doesn’t take damage from Pokemon with Special Energy attached, and there’s no chance for Duraludon V to be gusted up and knocked out prematurely. This means your opponents are deprived of chances to play around the Skyscraper ability and you have a better chance to win games.

Arceus VSTAR would remain in the deck to accelerate energy to both VMAX and use Starbirth to keep your game plan moving along. Arceus Duraludon VMAX enjoys favorable matchups against Mew VMAX and Lugia VSTAR as both are reliant on Special Energy to attack; however, Mew sometimes steals games with Echoing Horn on an Arceus V.

Scoop Up Net is still in Standard for a few months, making the Climactic Gate ability reusable; the timing has to be just right because the ability ends your turn each time. Scoop Up Net is a lifeline when you start with Radiant Eternatus and can’t activate its ability until it returns to your hand.

Irida has had quite an impact on Pokemon’s Standard format as a part of the Inteleon engine in Palkia VSTAR decks, driving the price of this uncommon up to over $15 for both it’s full art and rainbow rare versions. On the collector side, Irida is a character in the well-received Pokemon Legends: Arceus game, which is likely to drive up the price for this Supporter card.

Palkia VSTAR isn’t as popular as it once was, but with Silver Tempest Articuno’s paralysis attack and Emergency Jelly it can beat an unsuspecting Lugia VSTAR and be a nuisance to Duraludon VMAX. Irida is just as important to this new Palkia deck, sporting a full four copies, making this a great pull for collectors and players.

This card survives the upcoming Standard format rotation and will likely continue to see play alongside new Water-type ex’s, or maybe the Quaquaval from Scarlet and Violet because it’s easy to Irida for it and Rare Candy to evolve Quaxly.

This is the first full art Hisuian Zoroark V to be printed, and its release in a special set like Crown Zenith will drive up the price because of its rarity. This card doesn’t have much competitive value, but Zoroark is arguably the coolest Hisuian regional variant and the art is beautiful – this is an awesome card to pull.

Hisuian Zoroark VSTAR saw limited play at Pokemon events, but lacks consistent top placements and is a fringe deck at best. Setting up Ticking Curses with Gapejaw Bog and Gengar just isn’t a strong enough strategy to keep up with current decks like Lugia VSTAR. Additionally, a VSTAR Power that is essentially a Professor’s Research does nothing to boost the deck’s viability.

Radiant Charizard’s 250 damage attack is a great finisher paired with the Excited Heart ability, and with Archeops from Silver Tempest it can be used early in games too. Radiant Charizard was a deck all by itself at one point, but cards like Lost City now make it necessary to have a solid group of attackers to win games. Ultimately, it’s safe you say you can be excited if you pull a Radiant Pokemon from your sealed product of the last Sword and Shield set.

That’s everything we have on the best cards you can pull in Crown Zenith. Check out some of our other Pokemon TCG content like when is the Standard rotation, the best Pokemon Go cards, and Scarlet and Violet TCG rule changes.