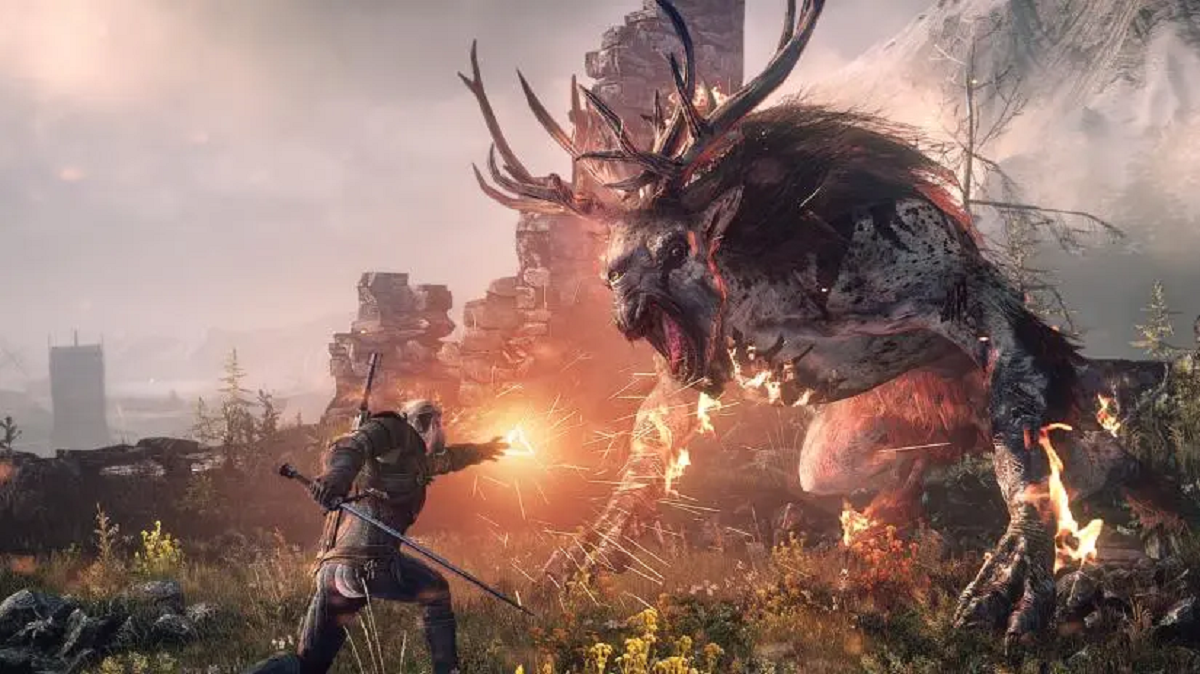 The Witcher 3: Wild Hunt is developer CD Projekt Red’s crowning achievement, and thanks to Netflix’s own recently launched adaptation of the Andrzej Sapkowski’s novels, it’s seeing a huge resurgence in popularity. Here we’re going to review the voice actors of The Witcher 3’s cast, whose talent helps to bring its rich story to life.

If you’re a fan of this sort of content then you should check out our other voice cast features, including this one and this one.

American actor Doug Cockle plays the distinctively gruff voice of Geralt throughout the entire The Witcher video game series. Although this is without a doubt a career-defining performance, Cockle has played central roles in numerous other games, including Augmented Empire and SpellForce 3. He’s also credited with “Additional voices” in games such as The Division and Horizon Zero Dawn.

The oldest and wisest of Kaer Morhen’s witchers, Vesemir is also Geralt’s right-hand man in The Witcher 3 and is especially prominent in its opening few hours. Vesemir is played by American actor William Roberts, who is best known outside of video games as having played Rosy’s Father in Balto. He also played the senator in Mission Impossible: Rogue Nation.

Irish actor Denise Gough plays Yennefer of Vengerberg throughout The Witcher franchise. You may recognize her face from 2015’s Robin Hood, in which she played a minor role. Outside of The Witcher, she’s also voiced the role of Tsarevna Alena in Dragon Quest Heroes II and Dragon Quest Heroes: The World Tree’s Woe and the Blight Below.

Jules de Jongh plays the role of Triss Merigold throughout The Witcher video game series. She’s an actor who has worked almost exclusively in the video game industry, with a number of roles in other established video game franchises. You may remember hearing her voice in Mass Effect Andromeda (Cora Harpe), Horizon Zero Dawn (Beladga), Batman: Arkham Knight (Christina Bell), and many others.

Peter Marinker demonstrates versatility in his range of voice acting talent, playing both the rugged dwarf Zoltan Chivay and the eloquent voice of the narrator too. Marinker is a London-based actor who’s been a professional for over fifty years. Since his first acting credit in 1968 he’s no doubt watched the video game industry grow from rudimentary platformers to the multi-million dollar AAA games that require talents such as his. He’s played roles in games such as Knights of Honor, Demon Souls, Dark Souls I & II, and The Witcher series.

The eccentric Bard Dandelion is played by Tim Beckmann, a Canadian actor with experience across film, TV series, and video games. He’s starred in Hollywood productions such as Rogue One (Captain Antilles), Hanna (Walt), and Midway (Captain Rawlings). Other video game performances include Horizon Zero Dawn (Brageld), The Division (Joe Ferro), as well as minor performances in Star Wars Battlefront and Killzone 2.

Tom Clarke Hill’s acting resume dates back to the late 1990s when he starred in The Prince of Atlantis TV series. Since then, he’s played mostly supporting roles in a variety of TV, film, and video games. You may remember him as having played the ICB Operator in The Entrapment, or Sgt. Cortez in Timesplitters: Future Perfect.

English actor Nathaniel Parker’s first acting performances were as part of the National Youth Theatre. From there he went on to attend The London Academy of Music and Dramatic Arts before scoring roles in film, TV series, and video games. His most notable roles include Dunstan Thorn in the film Stardust, Master Gracey in Haunted Mansion, and Martin Tanley in Beverley Hills Ninja.

English Actor Susannah Fielding plays Shani in The Witcher 3’s Hearts of Stone expansion. She draws on acting experience accrued mainly through roles in TV series such as I Want my Wife Back, This Time With Allan Partridge, and High & Dry. Other video game performances include playing Amy Simpson in the Forza Horizon series.

Like Peter Marinker, Alex Norton has been acting since the late 1960s, with performances in film, TV, and video games. He played Napolean in The Count of Monte Cristo, and Captain Bellamy in Pirates of the Carribean: Dead Man’s Chest. If you’ve seen Braveheart, Norton was the ill-fated Bride’s father.

Other video game voice acting performances from Norton include Rab in Dragon Quest XI: Echoes of an Elusive Age, and he’s also credited with supporting voice work in The Witcher 2: Assassin of Kings.

Sixty-year old Mark Noble’s acting career kicked off in the late 1990s starring in British TV series like The Knock, and London’s Burning. Since then he’s gone on to star in yet more TV series like Emmerdale. His only other video game credit is Tyrion in Warhammer: Total War.

The Duchess of Toussaint Anna Henrietta is played by MyAnna Buring, a face you’ll surely recognize if you’ve been Netflix’s The Witcher adaptation recently — she plays the role of Tissaia. Of course, Buring is a well-known actor for a number of other performances, such as Edna Braithwaite in Downtown Abbey. Her role in The Witcher 3 is her only video game credit.

Andrew Greenough played the role of Ga’els in Wild Hunt, as well as that of the misunderstood vampire Detlaff in the Blood and Wine expansion. These are the only two video game credits on his resume, which otherwise includes supporting performances in films like Sherlock Holmes (Prison Guard), Men in Black: International (Freddie the Alien), and Alien Autopsy (Preston).

The mysterious Elf Avallac’h is played by Michael Maloney, an English actor with credits in film, TV, and video games. He’s starred in the British drama Casualty, played Cassius in the Miniseries Empire, and was John Major 2009’s Margaret. Other notable video game performances include Doloran in Ni No Kuni II: Revenant Kingdom.

That does it for our list of The Witcher 3 voice actors in its voice cast.