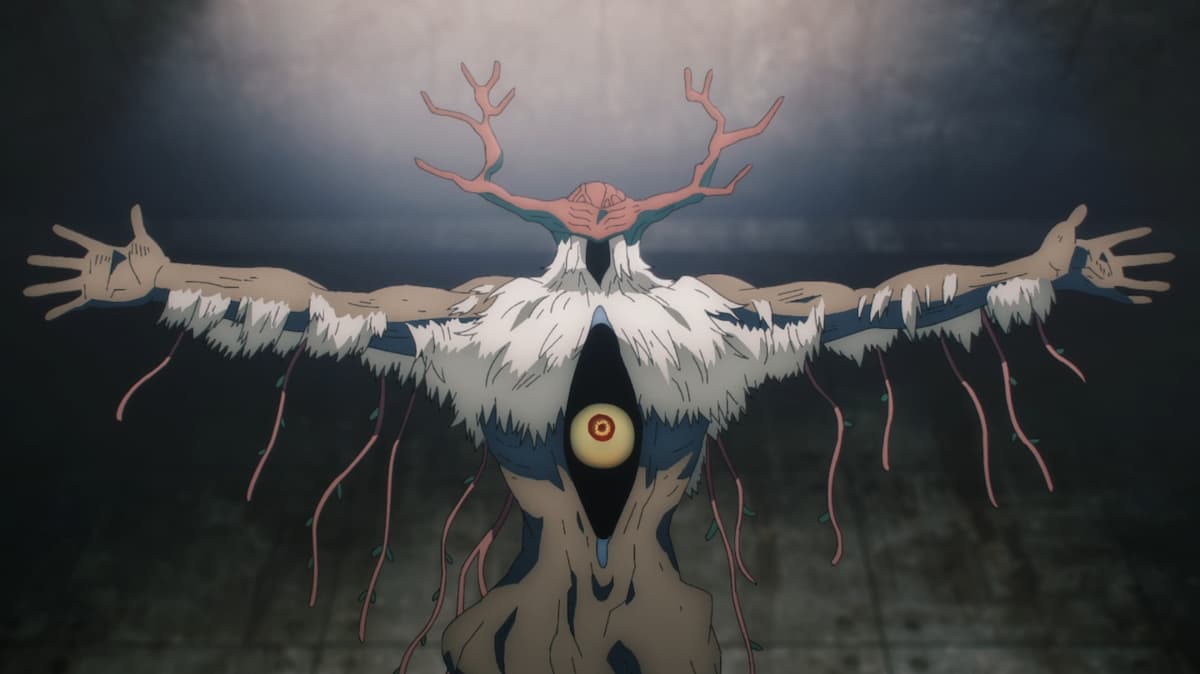 One of the wonderful things about Chainsaw Man is how the scaling of its monsters is proportionate to the conceptual fear they would create.

Gun Devil? Guns are terrifying, that Devil will be almighty. Tomato Devil? Sounds delicious and squishy, that won’t prove a threat at all. Testicle Devil? I guess it depends on how hard Denji kicks you.

The Future Devil, then, surely sits high on the ladder. Many people worldwide dread the uncertainty that the future holds, whether it is the decline of society or an upcoming appointment with potentially poor ramifications. Some of us just don’t want to face the hangover that tomorrow promises.

As such, when Aki is brought into the maximum security containment chamber, our inclination is that the Devil lurking within will be something most horrifying. When we meet the Future Devil, he is somehow intimidating and disarming all at once.

For starters, his outward appearance is that of a bearded humanoid tree with antlers, offset by an unnerving, enormous eyeball that peers out from an open chest cavity. On paper, it sounds like the kind of thing an AI bot would produce with a few prompts, but it is definitely a striking visage.

Then, it speaks. Does it beckon the Devil Hunter forward? Does it sneer wickedly, knowing that another human is about to make a heavy sacrifice for its services?

Nope. It loudly and vigorously declares that, “the future rules”.

Again and again. As if this were its life’s mantra, and Aki’s lack of shared enthusiasm is completely ruining its vibe. When the dour young gentleman refuses to relent — not even humoring the demon with a brief whip or nae nae — the Future Devil cuts to the chase, commanding that he place his head within its chest so that it can ascertain his fortune.

A quick peek into what lies ahead, and the Future Devil is amused. Delighted, in fact, as if it has just touched some boobs for the first time. Not only will it make a contract with Aki on the spot, it’ll lend its powers for a bargain price, merely requesting that it be able to reside within his eye in order to get a front row seat for his eventual demise.

The reason for this discount? Aki’s death, it seems, will be the absolute worst.

Suddenly, this goofy, offbeat Devil has changed in tone, carrying a harrowing message of what is yet to come. Aki isn’t interested to learn the specifics, either concerned that it will influence his actions or resigned to such a fate regardless, and we as viewers are left to wonder how and when this will happen. Can Aki prevent it somehow? Or is he on the fast track to disaster?

Manga readers could hardly contain their excitement (or their spoilers) when the Future Devil was about to make its debut, and in actuality, its screen time is minimal. The reason it has garnered such a fanbase is surely in its curious juxtaposition: A beast of immense power with a childlike whimsy, who simply revels in its knowledge of the grim tidings ahead, like one of those kids who has a secret that they won’t tell you.

This particular arc is especially generous on the Devil and Fiend front, introducing wildly popular characters such as the Angel Devil and the Violence Fiend. Whereas earlier on, Power seemed as though she would be something of an anomaly, now we begin to understand that the world of Devils isn’t so black and white.

It turns out they’re not all entirely evil, and some of them don’t even harbor any ill will toward humans. There is an instability to this allegiance, however, one that Kishibe is quick to warn others of. Devils and Fiends can be relied on in a pinch, but never fully trusted, as murderous intent lies somewhere within each of them.

Where does the Future Devil stand (besides literally in the one place, as it is constantly rooted to the ground)? It’s difficult to say, and that makes it all the more compelling, really. Its previous contracts came with the price of several organs, and it cruelly parleys with Aki solely so that it can soak in the experience of his death.

It also dances, for crying out loud, like one of those godawful Groot bobbleheads from a few years back. It’s a perverse little bundle of contrasts, acting as a harbinger of doom and its own personal cheerleader in quick succession.

It’s yet another example of the sublime storytelling mangaka Tatsuki Fujimoto has weaved into Chainsaw Man. The show, don’t tell approach offers enough information to keep us engaged, without explicitly guiding us to a definitive answer. You can draw your own conclusions on the Future Devil just as much as you draw your own fanart. Maybe stop short of the romantic Aki headcanons, though.