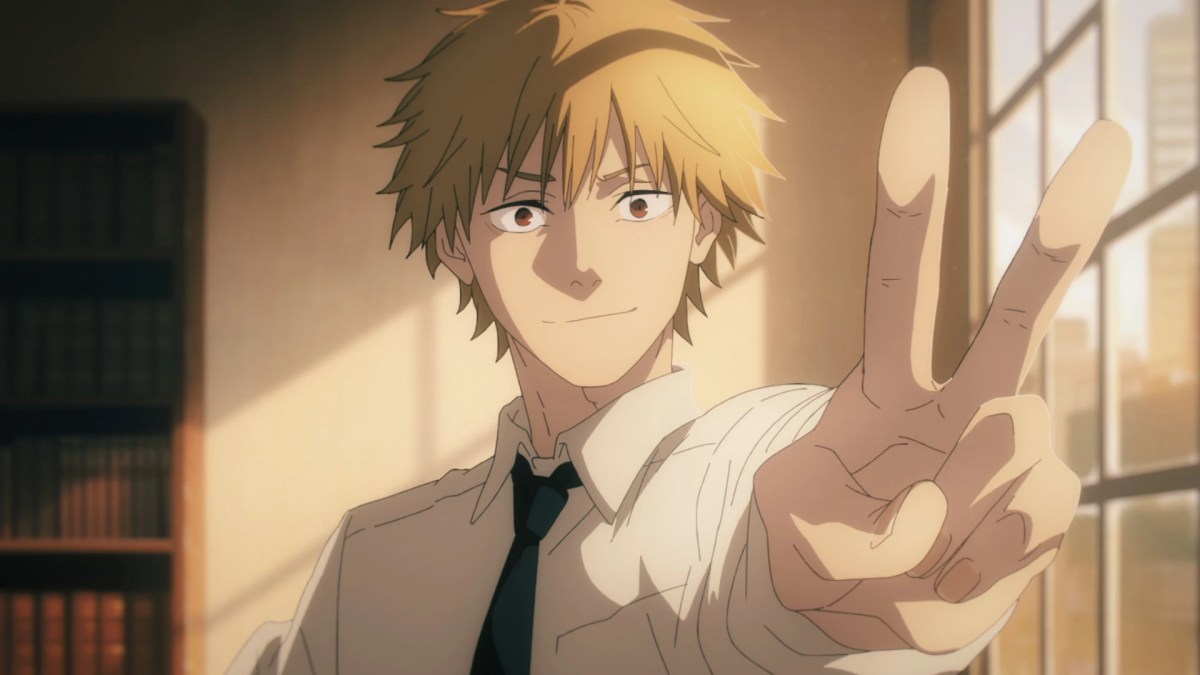 Chainsaw Man’s anime adaptation has been met, thus far, with glowing praise. The production value is top-notch and serves up crisp animation, strong voice-acting performances, and all the ancillary attention to detail that makes the anime feel more like an all-encompassing experience rather than just lip service to its manga and already-established fanbase.

*While we do our best to avoid major spoilers, there are specific story beats that we allude to here. If you would rather all of Chainsaw Man spoiler-free, be sure to check back once you’ve wrapped up the season!*

If there is one Achilles’ heel that the anime genre generally suffers from, it is its clunky, sometimes unnecessary dialogue that finds its way onto the screen. Exposition dumps, characters orating everything that is going through their mind in the heat of battle, and awkward narration that is meant to grab the viewer’s hand and guide them through the story, that instead ends up pulling them out of the experience entirely.

The root of the exposition problem stems from a few sources. The most obvious is the adaptation process from one medium to another. Large text bubbles in manga are welcomed because that is the nature of the medium. Reading a long-winded speech in the middle of a battle sequence or as a means of breaking up a particularly visual stretch of pages is not sneered at but rather expected. The issue arises when the source material is fed into the anime medium. A balancing act ensues, where producers and creatives must weigh fidelity to the manga/source material against making the story flow better as a cinematic work.

Another source of tedious explanation in anime comes from the original intended demographic it is written for. Shonen manga (and by extension its anime adaptation) is aimed at adolescent boys, emphasizing flashy battles and action that a youthful mind can more approachably sink their teeth into. As a genre aimed at younger audiences, the heavy exposition and handholding makes sense. Kids sometimes need a narrative explicitly spelled out for them, and there is nothing wrong with that.

We see this in super popular anime like JoJo’s Bizarre Adventure, an adapted manga that began as shonen and migrated to seinen (the demographic age group a step above shonen) in its later issues. The first two story arcs of JoJo’s anime are rife with information dumps and expository dialogue, just as one might expect for a show meant for a younger audience. Dragon Ball Z is also guilty of this, infamous for allowing its characters to reel off blunt, clunky chunks of dialogue describing their thoughts in the moment and analyzing the events unfolding in front of them.

Chainsaw Man slices this practice off at the bud. Both the manga and anime’s refusal to baby-step viewers through every beat bolsters it to a higher level, embracing the more mature demographics that consume both manga and its anime counterparts outside of Japan. The manga is billed as shonen and aimed at a younger audience, but the content — at least to our more delicate Western sensibilities — is far better suited for more mature viewers. Seeing the writing on the wall, MAPPA and its creative team resolved themselves to producing the anime with the tone and texture of a series meant for adults, much like the manga’s creator Tatsuki Fujimoto intended.

The anime owes much of its sophisticated pacing/tone to the groundwork laid by its source material. Fujimoto creates under the age-old storytelling tenet: show, don’t tell. His sense of pacing is restrained, with an eye for building tension and allowing sequences the time they need to play out naturally, free from convoluted explanation. Fujimoto’s innate eye for the cinematic favors beautifully detailed panels over abundant text, morphing his work into a storyboarded road map for animators to pick up and run with.

Fujimoto’s characters are drawn (literally and metaphorically) with subtlety, revealing themselves through minutiae scattered like breadcrumbs over the course of the manga. Denji’s maturation is teased through his action and inaction rather than overtly stated. Aki and Himeno’s true affection for one another is danced around much like their in-story romance. The world and its players grow organically, and the anime flourishes as a result.

The most potent example of Chainsaw Man’s shift to showing over telling comes in its anime’s first episode. Our introduction to this bizarre world of Devils walking amongst humans is conveyed with subtlety and a level of nuance that pays respect to its mature viewers. Denji’s backstory is not told through lengthy blocks of internal dialogue, but rather through flashbacks. His position of immense debt is slotted into the narrative casually through a mumbling conversation he has with Pochita.

Then, within the series’ first minutes, Denji skulks behind a corner, cranks up his cuddly Devil’s chainsaw, and goes to work on a gigantic Tomato Devil. He doesn’t sit there and explain it is a Devil that represents humanity’s fear of tomatoes. He doesn’t extrapolate on his position as an amateur devil hunter paying his debts to the Yakuza. He just rips the cord and goes to work.

In a universe that arguably warrants a ton of explanation, Chainsaw Man resists the urge to spoon-feed the ins and outs of its world to the viewer. The particulars of the Public Safety organization are not blurted out in a long-winded diatribe by Makima, Aki, or Himeno. Rather, we are left to glean the subtle details and mechanics of the Devil Hunting profession over the course of many episodes. The nuances are unveiled through Denji’s partnership with Aki and later Power, teased out in a natural cadence that feels far more organic.

When there is internal dialogue to be had, it fits the scenario in which it is being used. Information is conveyed as it is needed, in moments where it makes sense for a character to be thinking or speaking out loud. In Episode 2, we are introduced to the concept of a Fiend not through an elongated stand-off in which one character spews exposition, but through a very brief conversation between Aki and Denji as they stand at the threshold of a room containing the Fiend. It’s short, it’s sweet, and it puts faith in the viewer that they can handle being temporarily ignorant to every facet of a story element and piece the particulars together as the narrative moves forward.

In an almost reflexive commentary on anime’s exposition problem, Denji’s internal monologue in the moments after slaying the Fiend pokes fun at the issue. Rather than intensely pondering the ramifications of chopping the head off a Devil-possessed human, Denji launches into an impassioned rant about wanting to touch a woman’s breasts. He’s not pontificating his morality, his prowess as a Devil Hunter, the battle that just took place, or any typical stream of consciousness we’re apt to see in an anime’s main character. The moment is a hilarious, juvenile rambling that tracks perfectly with Chainsaw Man’s stance on needless exposition.

Perhaps most importantly, the battle sequences are not chopped up with exposition. As alluded to above, while it may serve a function in the written medium, nothing takes an anime viewer out of the action more immediately than a character analyzing the events unfolding in front of them. In Denji’s first big fight (after the very one-sided slaughter of the Zombie Devil) against the Bat Devil, the two trade pithy one-liners and savage blows, never standing idly across from one another entertaining full-fledged conversations about who will defeat who.

As the fight carries on, the Bat Devil uses a move that seemingly comes from nowhere: a mouth cannon that decimates everything in its path with a blast of air. As the attack charges up, Denji doesn’t stop to attempt to explain it, nor does any other character. It is left to the viewer to accept and parse for themselves. The lack of elaboration not only keeps us in the action but respects our intelligence while also letting our minds wander down new avenues. If this Bat Devil has this hidden talent, what other abilities is it hiding? What else can Denji himself do that we don’t know about? What other unique battle tactics do Devils have? Rather than lay it out plainly for the audience, it intrigues and piques the curiosity, compelling us to come back to learn about this world in future episodes.

Time and time again, the series disguises information in subtle and clever ways. Makima’s peculiar eyes are not fawned over and analyzed by Denji. He is not making the link between Makima being a Devil or a Fiend, the viewer is. Aki’s sword is not awkwardly explained during the Eternity Devil arc but instead left as a point of mystery to ponder for three more episodes until it is finally used (and even then, the mechanics are not exhaustively laid out). The Gun Devil, the chief antagonist looming in the backdrop throughout Season 1, is unearthed slowly through exchanges of natural dialogue and missions that leave traces of his presence. Everything unfolds with nuance and a refreshing reverence for the viewer’s intelligence and attention span.

The culmination of Chainsaw Man’s dedication to allowing the story to unfold virtually exposition-free is a wholly absorbing anime experience. Built on the foundations Fujimoto laid in his manga, it not only contains the mature themes that many shonen manga/anime do, but it delivers them with the mystique and naturalism that mature audiences love. Chainsaw Man walks the line between fidelity to its source and translation to the anime medium expertly. It treats its fans with dignity, allowing us to discover the world on our own time, trusting we make the necessary connections.

Future anime should take note. This is how manga ought to be written/adapted, and if Chainsaw Man’s reception is any indication, fans agree too.