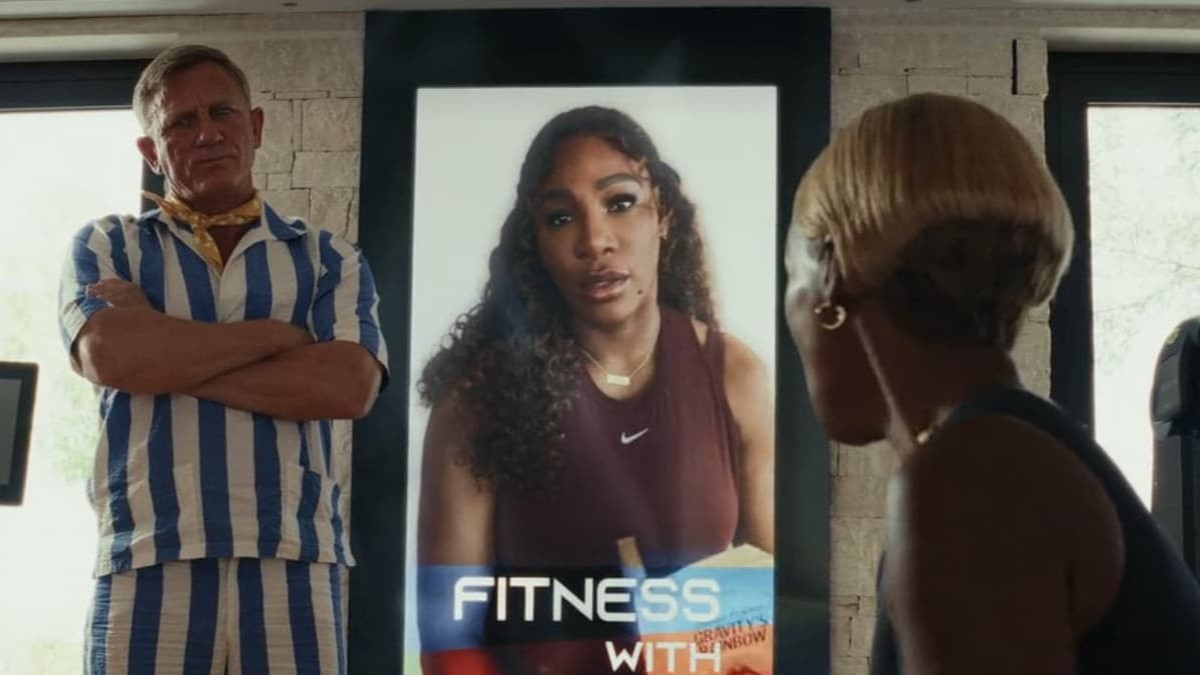 Glass Onion: A Knives Out Mystery is full of many cameos, such as Hugh Grant, Natasha Lyonne, Angela Lansbury, and many more. But did you know that one of these surprise guests includes a hidden Easter Egg from the film’s predecessor?

During a scene between Benoit Blanc (Daniel Craig) and Andi Brand (Janelle Monae), a screen in the fitness room showcases the famous tennis player Serena Williams as she reads a book. However, even though the two characters assume it is just a display, it ends up being a live feed of the athlete, who has been hired by Miles Bron (Edward Norton) to help with physical training sessions.

The book, Gravity’s Rainbow, is a callback to the original installment, Knives Out, where Blanc and Marta Cabrera (Ana de Armas) discuss the real-life classic novel by Thomas Pynchon. In this scene, the two characters talk about the book’s title, in which Blanc states, “It describes the path of a projectile determined by natural law. Et voila, my method. I observe the facts without biases of the head or heart.”

Despite the characters’ confession of never reading the book, the director of the Knives Out series, Rian Johnson, has a complicated relationship with the novel since he has read it a couple of times but doesn’t recommend the novel to anyone, mainly because of it being a hefty 780 pages. In an interview with SFGate, Johnson mentions, “It seems like this big challenging thing, but it’s actually the most entertaining book that’s ever been written. And it’s a book where you will experience literally every possible emotion.”

Knives Out also has more Easter Eggs of Gravity’s Rainbow throughout the film, including V-2 rockets from the book’s World War II era on Harlan Thrombey’s shelves. Moreover, Johnson discusses the similarities from other Pynchon projects, like The Crying of Lot 49 and Vineland. For example, Vineland inspired the dysfunctional family dynamic in Knives Out due to its unique portrayal of characters.

Now that Rian Johnson has continued showing his love for Thomas Pynchon’s novels in Glass Onion, there could be another reference to his work in a possible third installment of the series. Currently, there is no news about another Knives Out film, but it is highly likely due to its massive success on the Netflix streaming platform.