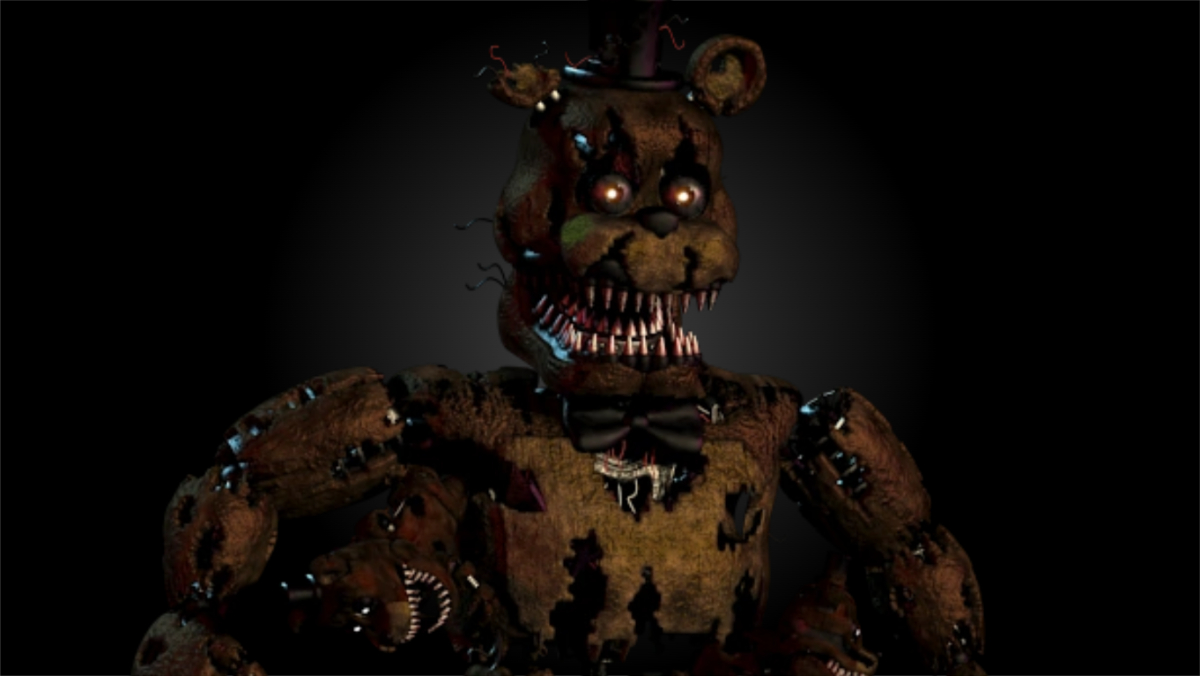 Five Nights at Freddy’s 4 put a spin on the usual FNAF format, abandoning the locations of Freddy Fazbear’s Pizzeria and Fazbear’s Fright, instead taking place in the bedroom of a child. Don’t expect to get any sleep though, as nightmarish animatronics and haunting puppets are set to stalk you and lurk in the dark. You’ll want to convince yourself there’s nothing in the closet or under the bed once you catch sight of these creatures, so here are all Five Nights at Freddy’s 4 characters you’ll encounter in the game.

Nightmare Freddy is a mutated and heavily damaged bear animatronic. His fur is torn in many areas, leaving exposed metal and parts of his skeleton out in the open. On top of this, Nightmare Freddy also has multiple miniature heads growing from various tears on his body, creating quite a monstrous appearance. This is not the kind of teddy bear you want to bring to bed, that’s for sure!

Nightmare Chica is a terrifying and heavily damaged animatronic, carrying the same nightmarish features as the other characters, such as sharp, jagged teeth, long claws, and dark, sunken eye sockets with creepy glowing pupils. There’s just something so off about Nightmare Chica that makes her so creepy to look at, I mean, seriously; she looks like Big Bird if he took a dip into the Horror genre.

Nightmare Foxy is a decaying, terror-inducing animatronic with crowed, sharp pointed teeth lining his jaw, and his signature hook hand. Nightmare Foxy is dealing with much more wear and tear than his previous game counterparts and even has exposed wiring around his jaw and ears.

Nightmare Fredbear is truly a horrific sight to stumble across. First off, his jaw is lined with long, jagged, pointy teeth. These are so monstrous that it makes his mouth somewhat resemble a bear trap. Alongside his teeth, Nightmare Fredbear also has long claw-like fingers, creepy, beady little eyes, buttons on his torse, and stitching holding his stomach together. All of this is complete with his purple hat and bowtie, the Fredbear classic.

Say goodbye to Ballon Boy’s little smile and sign and say hello to the terrifying Nightmare Balloon Boy. Nightmare Balloon Boy has the signature open jaw lined with pointed teeth, as well as elongated, pointed fingers that just make him so much spookier to look at. His little propellor hat used to add charm, but at this point, it just makes him look that much creepier like he’s ready to wreck harm against others. At least he kept his rosy little cheeks and nose. right?

Nightmare Mangle truly lives up to its name, appearing as a tangled mess of lanky limbs Nightmare Mangle is missing the majority of its body, with most of it consisting of a twisted metal skeleton and head. Nightmare Mangle is complete with its fancy pink bow tie and red lips, but that doesn’t stop the animatronic from being incredibly unsettling to look at.

If there was one character in the game that would freak me out the most, it would most definitely be Nightmarionne. Nightmarionne is the Nightmare version of Marionette and is easily much more of an intimidating and haunting character than the latter. After all, just look at those long lanky limbs and skeleton-like body. On top of this, Nighmarionne’s face is terrifying, especially with the big empty smile and soulless, glaring eyes – just looking at this thing makes me feel like I’m about to receive a bad omen.

Plushtrap is the plushie variation of Springtrap, and a small bunny creature within the minigames of FNAF 4. While Plushtrap isn’t as damaged and decayed as some of the other animatronics, he’s still quite the spooky little guy to glance at. Just look at his huge eyes and tiny pupils, and the way his mouth is held at an idle grin… or is it a grimace? Either way, there’s just something off about this little guy.

Nightmare is a shadow-like, jet-black bear animatronic with a yellow bow tie and hat. Nightmare seems to be based on the already spooky concept of Nightmare Fredbear but pushed even further into having a dark and demonic appearance, giving him an evil red gaze, long sharp claws, and a mouth full of horrifically sharp fangs.

The Crying Child is a character appearing within FNAF 4’s end-of-night minigames as the main protagonist. The Crying Child is timid and innocent, wearing blue pants, a black and gray shirt, and brown shoes. As seen in his various pixel art, tears are often welling in the corners of his eyes, earning him the name of The Crying Child.

The Masked Bullies are the followers of the Older Brother and the bullies of the Crying Child, all wearing masks of certain animatronics. The only one of the bullies in the game to be seen without a mask at some point is the Freddy Mask bully. Interestingly, the Freddy Mask bully is also the one to not have the white highlights in his eyes that both the Bonnie Mask, Chica Mask, and Older Brother have.

Pigtail Girl is a minor character, only appearing within one of the end-of-night Minigames. Pigtail Girl is shown to have green eyes, an orange shirt, a red skirt, and orange shoes. Her hair is a dark ginger color and worn in pigtails, hence her alias. Pigtail Girl appears to enjoy spreading rumors in order to scare people, indicating she may be on the meaner side.

Plushtrap Kid is one of the end-of-night minigame characters, seen carrying around a plush toy of none other than Plushtrap. Plushtrap kid has dark blue eyes, and brown hair, and wears brown pants and a green shirt with a red heart. Plushtrap Kid also makes a point of saying that he has to be careful with his plush toy, as it is a finger trap.

Toy Girl is one of the minor characters appearing in the end-of-night minigames. Not much is known about Toy Girl, but she is shown to have interacted with the Crying Child on at least one occasion. Toy Girl has brown hair, topped off with a red ribbon, and wears a bright pink shirt and dark denim shorts with white shoes. Toy girl also appears to carry toys of Toy bonnie, Toy Chica, and Toy Freddie from FNAF 2.