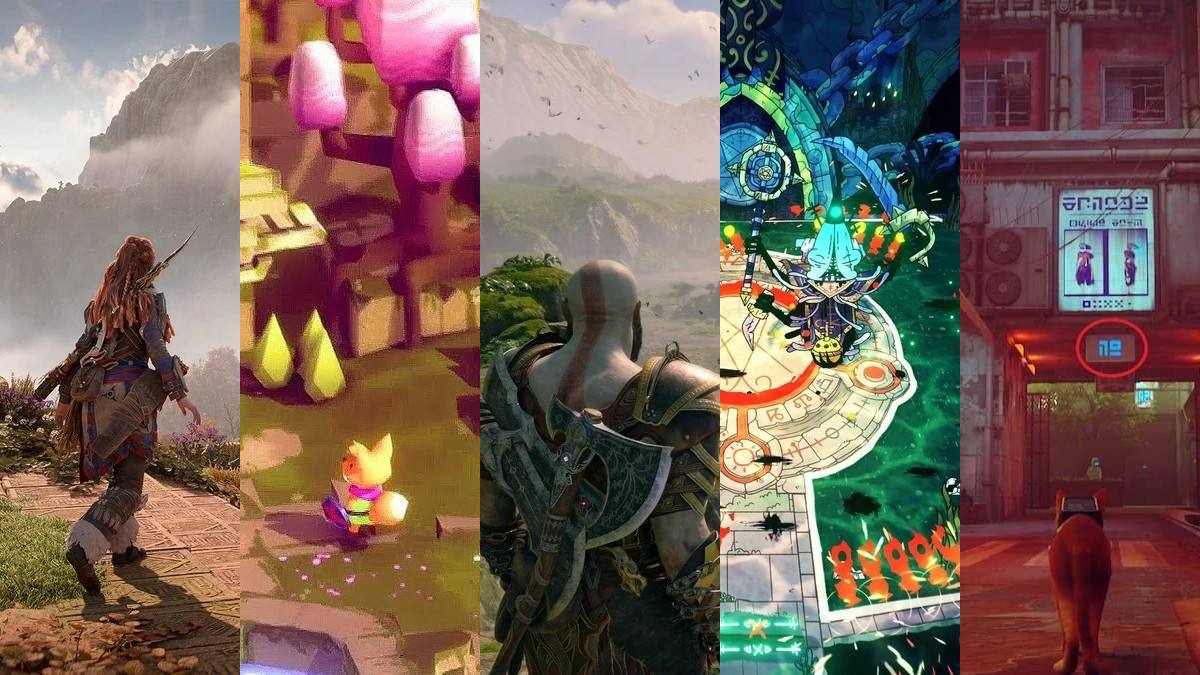 When it comes to entertainment, a lot of the time, people are just looking for some great action or adventure that’ll thrill and excite them. That’s no different for gaming, and thankfully, we’ve had another great year of content to help make up that genre. From cat journeys to world-ending missions, these are the best action adventure games of 2022, as voted on by our staff and editors.

Managing & Guides Editor, Chris Jecks: Horizon Forbidden West is a truly magnificent third-person action-adventure game. Picking up Aloy’s story from the cliffhanger ending of its predecessor, Forbidden West sees our titular protagonist embarking out into – you guessed it – the Forbidden West area of the world. Sprawling deserts, lush jungles, and rolling green pastures await, each teeming with its own native machines. Each of these machines comes with its own unique elemental weaknesses and chassis weak points that can be exploited to deal massive damage during combat.

Forbidden West’s map also feels significantly larger and is packed with bustling cities that actually feel alive, side quests that’ll have you venturing off the beaten path, and an assortment of collectibles just waiting to be found in various nooks and crannies. Essentially, Forbidden West feels like a typical sequel: It’s bigger and better in every conceivable way, so as a big fan of the first game, this was a welcome arrival during the wintry UK weather of February this year.

Wrap all of that up with a blockbuster-scale narrative, some fantastic acting performances – led by Ashly Burch as Aloy and Lance Reddick as Sylens – and some of the best visuals you can experience on PS5 right now, and you’ve got an epic 40-hour adventure that you just won’t want to put down.

Senior Editor, Alex Gibson: Far from slaying mighty monsters or battling through dangerous dungeons, Stray is an action/adventure played at a slower pace. It’s all about a curious wee kitten scurrying through a cybercity dystopia inhabited by a forgotten robotic race, which is a premise as bizarre as it sounds on paper but proved to be one of the most compelling games I played in 2022.

To be clear, while Stray does border on being a walking simulator at times, it has its moments of faster-paced adventuring. While questing through wonderfully detailed hub areas that look and feel like suburbs straight out Blade Runner, there are tense chase scenes, stealth-action segments, and even some good ol’ shooting to keep you on your toes.

Stray isn’t an especially challenging or long-lasting experience, but it’s a quality-over-quantity affair that I think will stick with me far longer than many of the blockbusters I trudged through this year. If you haven’t already, make sure you check it out.

Staff Writer, Rebecca Stone: It’s rare when an indie game that is so clearly inspired by some of the greatest franchises of all time is strong enough to stand out as an iconic game itself. Tunic does exactly that: Even though it takes age-old concepts from classic series like The Legend of Zelda and Dark Souls, it incorporates them into the gameplay in new and interesting ways.

Tunic is challenging, but it’s so well-designed that solving its intricate puzzles feels rewarding and satisfying. The in-game guidebook plays a huge part in why the gameplay here is so unique. Players who grew up with games in the 80s and 90s may remember using real-life guides and maps to navigate the on-screen worlds, so the one provided in Tunic is not just useful, but it also sparks a nostalgic feeling.

Exploration is a big concept in Tunic too. Players twist and turn through labyrinths, and may find secret paths leading to hidden bonuses. The game really rewards poking around every corner of the isometric world by uncovering hidden areas.

Tunic also does a great job of teaching the player how to make progress without being overly obvious or explicit in its instructions. At first, it may seem confusing trying to interpret the strange language used to communicate, but the way the information is presented helps the player learn in a natural and empowering way.

It’s no surprise that Tunic was one of the best action-adventure games from this year, and there’s no doubt it’ll go down as one of the strongest indie titles from this decade. Hopefully, a new adventure with our anthropomorphic fox friend is in the works for us to enjoy someday.

1st Runner-Up: Cult of the Lamb

Features Editor, Andrew McMahon: On paper, it doesn’t really sound like there would be much action or adventure in a game all about creating a cult. Well, this little lamb of mine not only manages to prove everyone wrong that judged Cult of the Lamb by its cover, but it also shines while doing so.

In Cult of the Lamb, the overall goal is to grow powerful enough so that you can traverse through the dangerous land of false prophets, all in the hopes of defeating each of the Four Bishops of the Old Faith that rule them. As you progress on your journey via a Roguelike gameplay loop called Crusades, this task becomes increasingly more difficult.

The game features a wide variety of enemies, each with their own unique abilities that get more sporadic and difficult as the game progresses, and you’ve got to survive this onslaught of minions to even make it to the boss. Once you do, each of those abilities is amplified and turned into a bullet-hell boss fight that’ll leave you begging for mercy.

Thankfully, the game’s simulation aspect helps you level up your weapons, skills, and abilities, so long as you take care of your flock by doing different objectives, feeding them, and making sure the place isn’t covered in poop. It’s a surprisingly deep and satisfying combination of management and action that makes for one of the best adventures of the year.

Features Editor, Andrew McMahon: Nothing says adventure quite like a boy and his dad setting off to fight gods with the hopes of starting an event that’ll lead to the end of the world, am I right? That, and a bunch of other amazing stuff, is pretty much the pitch for God of War Ragnarok.

Taking place four years after the events of the previous installment, God of War (2018), we pick up pretty much where we left off, as Kratos and Atreus find themselves in dire straights with just about every Aesir they meet. Not even an hour into the game, and they’ve already come face to face, and blow to blow, with three of the most important Norse gods there are.

This first hour sets the tone for God of War Ragnarok, as it’s a nonstop, emotional thrill ride the entire way forward. Whether you’re doing the main story or exploring to find side quests and collectibles the game has to offer, there’s an endless amount of things to do in the game. There’s even Valkarie-level threats to challenge yourself with for the truly masochistic gamers out there.

Combine all of this with the improvements to combat, a much more intricate leveling system for Kratos and NPCs, and an entire new weapon to play around with, and it’s pretty easy to get lost in this game for hours on end. I actively found myself going out of my way to complete more in God of War Ragnarok simply because of how fun it was to wipe the floor with enemies by using different variations of attacks while switching between the Leviathan Axe, Chaos Blades, and Draupnir Spear.

But as much as I enjoyed pinning enemies to walls or filleting them with cursed blades, there’s nothing that tops the adventure Kratos and Atreus go on in this game. It’s one of doubt, self-discovery, and conquest, as the father and son duo do everything within their power to defy fate and prophecy; all without losing each other, the people they care most about, or their values.

That wraps things up for Twinfinite’s picks for the best action adventure games of 2022. Be sure to let us know what you think in the comments down below!
Related Posts
Comments
Continue Reading
Related Topics:action adventure, cult of the lamb, feature, God of War Ragnarok