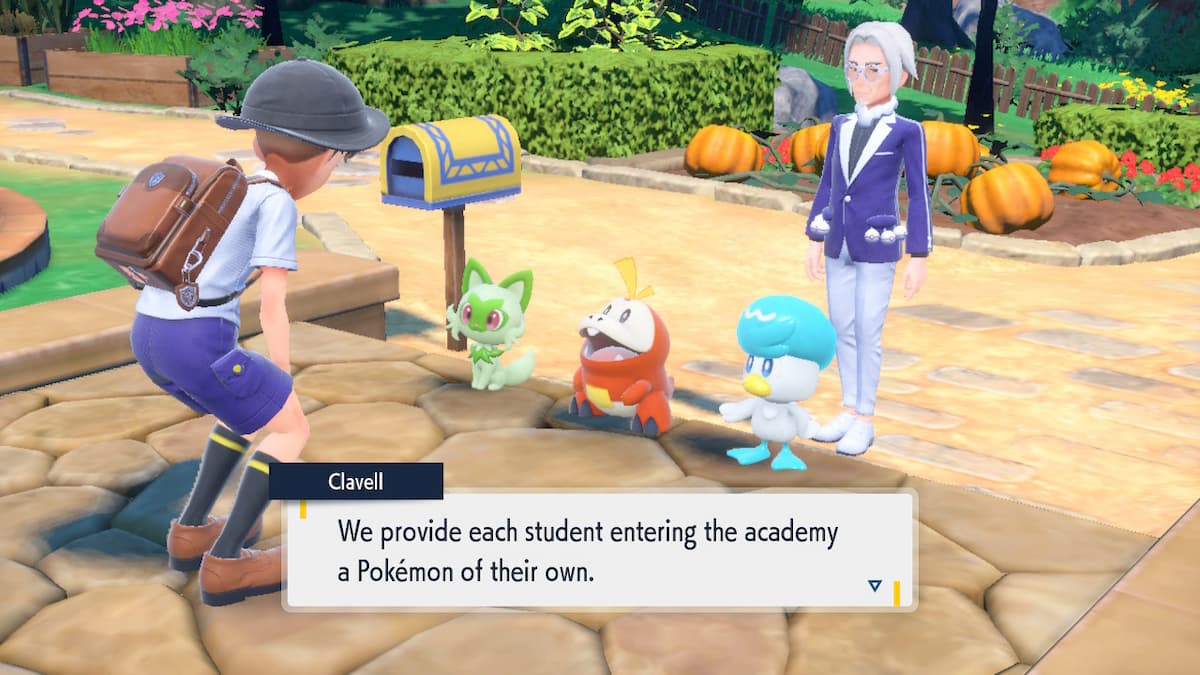 Pokemon was rather secretive about the Paldea starter Pokemon evolutions leading up to Scarlet and Violet’s release, so you probably have a lot of questions about them regarding their abilities and attacks. Here’s everything you need to know on all the starter evolutions in Pokemon Scarlet and Violet.

What Are the Starter Pokemon Evolutions in Pokemon Scarlet and Violet?

The starters are fairly standard in terms of typing and evolution, but each Stage 2 learns an exclusive move upon evolution.

The Grass-type Sprigatito evolves into Florgato at level 16 and remains a mono Grass-type. This Pokemon learns Seed Bomb at level 20, which is a powerful Grass attack you’ll want to use often and provides a quick upgrade to Leafage. U-Turn is a convenient choice for Florgato when you need to switch Pokemon for a better type matchup.

According to the Pokedex, “Floragato deftly wields the vine hidden beneath its long fur, slamming the hard flower bud against its opponents.” It’s interesting that Pokemon decided to give this Pokemon a flower to have it used as a weapon when the flower makes it seem like the Sprigatito line dances instead of the Quaxly line.

Floragato evolves into Meowscarada at level 36, and it gains Dark-typing and learns the exclusive Grass-type move Flower Trick. It’s the only attack that never misses and always crits, so it’s a great move to have on Meowscarada. Other moves like Knock Off and Thunder Punch are great additions to this Pokemon’s move set.

Meowscarada is super fast and has a solid attack stat, so you’ll want it to have a Jolly or Adamant nature, and if you happen to have an Ability Patch, Protean is one of the best abilities in Pokemon because it changes this Pokemon’s type to match every move it uses. You can Thunder Punch and become an Electric-type to easily resist a Flying Pokemon’s attack, not to mention STAB bonuses apply to every attack.

The Fire type Fuecoco evolves into Crocalor at level 16 and remains mono Fire-type. Teach this Pokemon Flamethrower as soon as possible; it’s the best attack Crocalor can use. Until then, Incinerate is an ok Fire attack and a definite upgrade over Ember.

According to the Paldea Pokedex, “The valve in Crocalor’s Flame Sac is closely connected to its vocal cords. This Pokémon utters a guttural cry as it spews flames every which way.” Crocalor clearly can’t sing yet, so it cries out every time it uses a Fire attack instead.

Crocalor evolves into Skeledirge at level 36, and it gains Ghost-typing and learns the exclusive move Torch Song. With a power of 80 and a guaranteed Special Attack boost, Torch Song is one of the best Fire-type attacks ever. Skeledirge is bulky enough to give you plenty of opportunities to Torch Song, then Fire Blast, or Shadow Ball for a ton of damage, so keep this starter on your team throughout your adventure.

Skeledirge also has an awesome Hidden Ability that ignores the stat changes of opposing Pokemon when dealing and taking damage. Fire Blast can hit through Amnesia, and Calm Mind Special Defense Boosts without needing to Torch Song first to maintain the same damage. There’s no need to worry about Mimikyu using Swords Dance and then Shadow Sneaking when you have Unaware.

The Water-type Quaxly evolves into Quaxwell at level 16 and remains mono Water-type. This Pokemon learns some solid physical moves like Aqua Jet, Aqua Cutter, and Acrobatics, although special moves are definitely not its strong suit. Be sure to take advantage of this Pokemon’s attack when battling Team Star’s Fire Crew and giant Klawf.

The Pokedex reveals the following information about Quaxwell: “These Pokémon constantly run through shallow waters to train their legs, then compete with each other to see which of them kicks most gracefully.” This Pokemon never skips leg day with such a strict training routine and fun competition with other Quaxwell.

Quaxwell evolves into Quaquaval at level 36, and it gains Fighting-typing and learns the exclusive move Aqua Step, a Water-type physical move with a power of 80 that raises Quaquaval’s speed one stage. Combined with a Jolly nature, this Pokemon is quite fast and can Close Combat sweep teams missing Ghost Pokemon.

Aqua Step is considered a Dance move, so Oricorio can copy it with its Ability Dancer and deal additional damage while raising its speed. This neat combination can give you a big advantage during a battle and counters different types depending on which Oricorio form you use. Sensu Style Oricorio can take down Psychic-types that hit Quaquaval for weakness, or Pom Pom Style can KO Flying Pokemon that threaten this dancing duck.

That’s everything we have on all the starter Pokemon evolutions from Pokemon Scarlet and Violet. Check out some of our other Scarlet and Violet content, like is there a Battle Tower, how to catch Wingull, and the weirdest Pokemon designs.