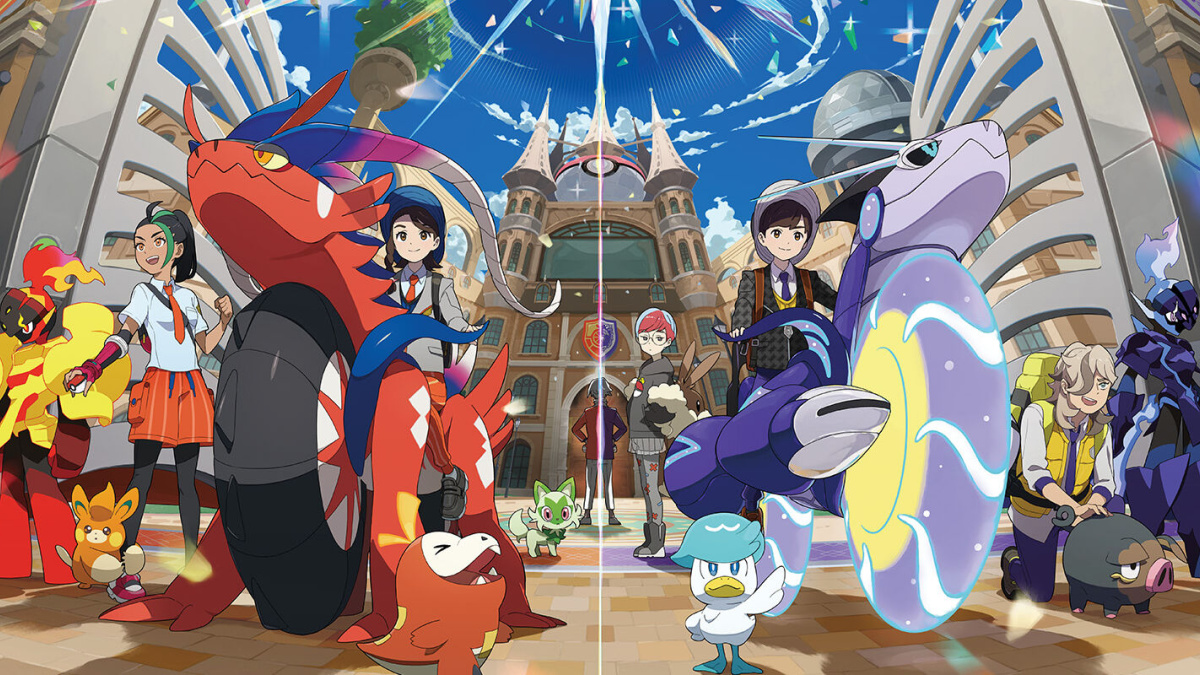 With Pokemon Scarlet and Violet’s launch earlier this month, players have now had a chance to see many of the new Pokemon roaming across Paldea. There are plenty of great designs, but some are just plain weird. Seriously weird, in fact! For a bit of fun, let’s wrap up the 10 that really don’t make much sense.

This Pokemon looks almost identical to Diglett due to its eyes and nose but is a completely different Pokemon; a very strange decision because Pokemon already has Alolan Diglett as a regional variant, so Wiglett could easily be another one. Additionally, the fact that it’s a Water-type that lives underground on beaches doesn’t add up, can it even breathe underwater?

The Fix: changing Wiglett to Paldean Diglett can turn this into a normal Pokemon that happens to live near water.

Despite looking like Treecko, Frigibax isn’t a Grass-type, nor does it look much like its evolutions Arctibax and Baxcalibur. They’re just too spiny and sharp to resemble the squishy Frigibax, plus they look much meaner and more aggressive. Frigibax and Arctibax resemble dinosaurs, while Frigibax looks like an innocent baby Pokemon.

The Fix: Frigibax could use a tail and some spines on its head to resemble the dinosaur appearance of his evolutions.

The Tumbleweed Pokemon introduces a new evolution mechanic, evolving after 1,000 steps outside its Pokeball, that clashes with a design that’s missing feet. It rolls and drifts in the wind, making it difficult to predict how close it is to becoming a Brambleghast. Its eyes take a bit of getting used to as well because they’re basically just floating seeds without a mouth or nose nearby.

The Fix: give Bramblin feet, or at least larger spikes so it can take steps, it can evolve the feet away when it becomes Brambleghast.

The candle on Greavard’s head looks too similar to Litwick, and since they’re both ghost Pokemon, they could have a relationship like Tatsugiri and Dondozo. Instead, the candle serves no real purpose and just sticks out of the ground; to make matters worse, it evolves away the candle as Houndstone in favor of a tombstone. Doesn’t it make more sense for Greavard to have a smaller tombstone before it evolves? Its name is a play on graveyard, after all.

The Fix: the candle should really be a small tombstone, or maybe flowers.

The dolphin Pokemon Finizen is cute and has a strong design, the problem comes in when it evolves into Palafin because it looks exactly the same. Only when it changes to Hero mode does it distinguish itself as a new Pokemon. Additionally, Finizen has a strange new evolution mechanic: it involves having another player join you via the Union Circle and watch it level up to level 38 as if finding honest trade partners isn’t hard enough.

The Fix: change the coloration of Palafin or the stripe on its side to distinguish it from Finizen.

For a pepper Pokemon, it looks a lot like a penguin; on the other hand, Scovillian looks like a pepper, sporting green and redheads that produce lots of spices to fire at other Pokemon. A pepper version of Applin would be a logical pre-evolution for Scovillian, but Capsakid looks more like something that evolves into Eiscue. Additionally, this Pokemon’s eyes combined with its beakish nose make it look rather ugly.

The inspiration for this Pokemon might be the hardest to identify in all of Paldea. Rock-types are typically heavy and strong, plus they incorporate rocks or shells in their design, Glimmet has none of these things; in fact, it floats around with its balloon-shaped body absorbing minerals from caves and scattering petals like a Grass Pokemon. This Pokemon looks nothing like other Rock-types or like something that belongs in a cave, although its secondary Poison-typing might be on the mark.

The fix: change Glimmet’s typing from Rock and Poison to Flying or Grass and Poison.

Iron Treads is a decent Paradox Pokemon, but its eyes are off-putting. It’s based on Donphan, which has clear eyes on either side of its trunk, but those eyes are replaced with what looks like a phone with eyes as wallpaper. Does it close its eyes to sleep or power down its face? The design for Iron Treads appears to be converted from a Team Rocket robot, taking the future trend too far.

The fix: separate this Pokemon’s eyes so it looks natural.

This Pokemon looks like a mushroom house from Mario, especially with a block of salt on its head that resembles a chimney. It’s weird that the final design looks straight out of Mario when changes could’ve been made to its body shape to make it an original Pokemon. Even salt block feet instead of a block on its head would give it a unique design.

The fix: change Nacli’s body shape or give it feet.

This Legendary Pokemon is just a random assortment of plants lying around a forest, moss, leaves, vines, with a wood tablet wrapped around it. It’s too much when it isn’t arranged with a plan in mind, and the vine eyes sticking out of its head make it even weirder. Magcargo is a snail Pokemon with a simpler design that makes a lot more sense with eyes on its body, and Wo-Chien should look more like that.

Check out some of our other Pokemon Scarlet and Violet content like every map icon, the best Pokemon for catching Pokemon, and how to get perfect IV Pokemon.