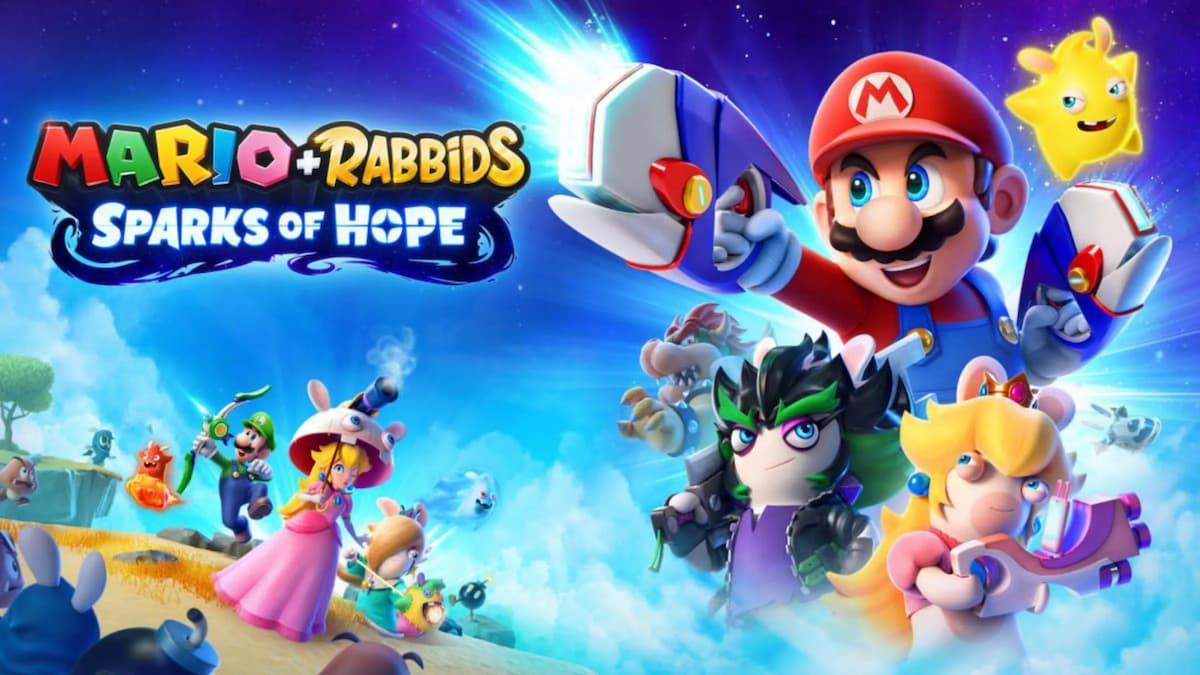 In a year where tactical RPGs are coming out of your ears, it can be hard to stand out in that genre and do something fresh and never before seen. Mario + Rabbids Sparks of Hope has no issues with standing out because it is an idea so far-fetched that it still just doesn’t make any sense. Yet, it just works.

As a follow-up to 2017’s Mario + Rabbids Kingdom Battle, Mario + Rabbids Sparks of Hope brings back the combination of Rabbids and Mario but takes it to the next level. That’s right, Rabbids can speak. We’ll get to that.

After a few moments with this game, it is easy to see that the world, story, and gameplay were improved in every way from its predecessor. The exploration is more fleshed out, the characters are more engaging, and the battle system is more strategic and challenging than ever before.

The story is pretty straightforward. A mysterious enemy known as Cursa is on the hunt for Sparks that will help her gain ultimate power and rule the entire galaxy. Sparks are a combination of Lumas and Rabbids and they come packed with powerful abilities that you can use in battle.

Our heroes, Mario, Peach, Luigi, Rabbid Mario, Rabbid Peach, and Rabbid Luigi get sucked into the fray when Cursa attacks the Mushroom Kingdom and launches them on a journey to stop Cursa’s terror and rescue all the Sparks.

As you travel through each planet, you’ll be met with Darkmess, an icky black goo that has ruined the planet’s ecosystem. It is your job to help the planet’s Warden by cleaning the Darkmess and utilizing that purified Darkmess energy to get your ship to the next planet.

The planets in Mario + Rabbids Sparks of Hope truly showcase how this game improves upon the formula and makes it far more engaging. From exploration to battles, this game makes its predecessor feel bare and unfinished.

Each planet demands that you navigate your way through the Darkmess blocking the path to the goal. It becomes a puzzle where you maneuver blocks, throw stones to clear darkmess, find special keys to open doorways, and place and turn a variety of objects to unlock paths.

You’ll also reach checkpoints that let you fast travel back to a location by opening the map and selecting that flag. And once you’ve cleared the Darkmess, it becomes a lot easier to get from place to place on the planet. They even place convenient warp pipes that will get you right back into the adventure, leaving very little room for downtime or needless backtracking.

On your path, you’ll see gorgeous murals with backstories about the Wardens that are lovingly and hilariously narrated by Beep-O. Beep-O and his new AI companion Jeanie are fully voiced throughout the game and even the Rabbid counterparts have some voice acting alongside their dialogue.

It will surely take you by surprise to hear Rabbid Mario speak a few words here and there, but it also made me wish that they got to voice more of their lines. The usual “bwahs” and mindless yelling that get these characters compared to the Minions are nearly gone and there is a better focus on their personalities and character traits.

The cutscenes are gorgeous and hilarious, and they showcase how delightfully charming yet odd the combination of the Mario and Rabbid worlds can be. Every inch of the planet is filled with character and it honestly becomes difficult to stay on task with all the side quests, collectibles, and secrets to find.

Going deeper into the exploration and side quests benefits you in the long run. Side quests often mean more experience points to power up your heroes, but you can also find more Sparks to join your team. Additionally, you get more Planetary Coins that let you buy items that will help you level up your Sparks or a key to unlock a special mission for another Spark.

This is a crucial part of the game because it gives players more options and control over the strategies they want to use during the battles. And the battles are where this game really shines. Between the Skill Tree and Sparks, there are more ways to change up your strategies than ever before.

The biggest improvement is that players are no longer required to have Mario in their lineup at all times. This allows you to really customize your party in ways you couldn’t because it felt like you always had to take Mario into account.

The Skill Tree is really fun to experiment with. Every level you grow earns each character a Skill Prism that can be used to unlock abilities in the Skill Tree. Because you are limited by these points, you have to come up with builds that benefit your play style. Fortunately, you are never locked into a play style because at any time you can simply remove a skill and add another with no penalty.

I personally love getting up close and personal with the enemies, so bumping Rabbid Mario’s dash skills to create explosions that chipped away at nearby enemies was incredibly satisfying. Finish them up with his weapon’s powerful attack and you can see multiple enemies go down at once.

Not only that, I eventually found a Spark with the ability to draw enemies within an area closer so I could really power up that combination of explosive dashes and melee attacks. The Sparks really allow you to boost your strategies in a lot of ways.

The new movement system definitely inspired my desire to build a team of dashers. Characters can move freely within a certain area, but as soon as they use their main weapon, they can no longer move. It’s rewarding to find ways to inch your way toward enemies that were initially unreachable by combining your team jumps with jump panels and rabbid pipes.

Sparks are a joy to collect. Each one features a unique ability a character can utilize to boost their attacks, deal extra damage, and change the elements of an attack to have a super effect on the enemy. These super effects can burn the enemies so they run around in a fury or cause splash effects that push them off the map.

Additionally, enemies often have weaknesses and resistances to certain elements or super effects so it is worth scoping out the map prior to starting a battle so you can equip the correct Spark for a situation. You don’t want to accidentally weaken your attacks because an enemy can resist.

There is no end to the combinations you can come up with between Sparks, attacks, skills, and techniques. It’s incredibly satisfying to find a build that lets you complete a mission in the first turn without the enemy getting a chance to retaliate.

The fact that the games’ exploration and side quests contribute directly toward your party shows how well the game has been crafted to keep players rewarded at every step of the journey. Because even though you can finish a random encounter quickly, the story quests and side quests can really ramp up the difficulty so you’ll need all the help you can get.

One great convenience this game offers is level scaling. If you aren’t interested in the side quests, you can streamline your gameplay and focus strictly on the story missions. The story quests will always be set to the same level as your characters so there is no way to be underleveled or overleveled in the game.

Though, you do benefit from gaining levels because you will be able to unlock more of your skill trees and the ability to strengthen your Sparks even further. Regardless of that, players won’t run into a story mission that will require some grinding to get through nor one that feels too easy to be fun.

Exiting battles is another quality-of-life feature that provides so much convenience. Clicked into a mission you didn’t want to play or ran into an enemy you didn’t want to encounter? It’s fine because you can just leave. There is literally no penalty for leaving a battle and you can leave them at any point.

It doesn’t matter if you are at the beginning of a battle or in the middle, you can exit or restart it if you are unhappy with the situation for any reason. Maybe you didn’t want to use certain characters or maybe you just didn’t feel like dealing with an enemy encounter. The game isn’t going to force you to sit through an enemy because they wouldn’t let you escape. We’re looking at you Pokemon.

Mario + Rabbids Sparks of Hope is not without some bugs here and there. None of them are especially game breaking, but one I ran into did cause me some confusion and missed opportunities in a battle.

Most players will see that the game can have a lot of pop in and dropped frame rates when exploring the planets. Unfortunately, that can break the immersion when you are watching a cutscene as you are landing on a big new planet.

More commonly, I ran into some unresponsive controls in regard to Beep-O’s powers. You start to unlock these powers on the second and third planets, but the power to reveal hidden paths can be very finicky. It may take a few clicks of the button for the power to actually trigger at times. It’s not a huge issue, but definitely an issue that can be annoying when you’re trying to quickly navigate an area.

The weird bug I ran into was definitely due to my tendency to dash enemies. There were a couple of cases where I had Rabbid Mario dash out of his movement range. From that point, he was able to move freely throughout the map, but couldn’t interact with enemies, pipes, or jump panels outside of the main weapon attack.

The gameplay relies on your character’s area of movement and though this bug was rare, it did cause me to miss out on some strategic moves in those battles. Fortunately enough, it wasn’t something that caused a mission to fail or restart because, by the next turn, everything was back to normal.

Overall, Mario + Rabbids Sparks of Hope is able to captivate with its worlds and pull you down rabbit hole after rabbit hole of side quests, treasures, and battles. You’ll find yourself wandering off course to help a Rabbid in need or rescue a Spark who will then help you on your journey.

The systems meld together beautifully and ensure that there is always something new to do or discover. It all feeds directly into growing your party and coming up with new strategies that make the battles more exciting and satisfying every step of the way. It’s a game that definitely lives up to the Mario name. 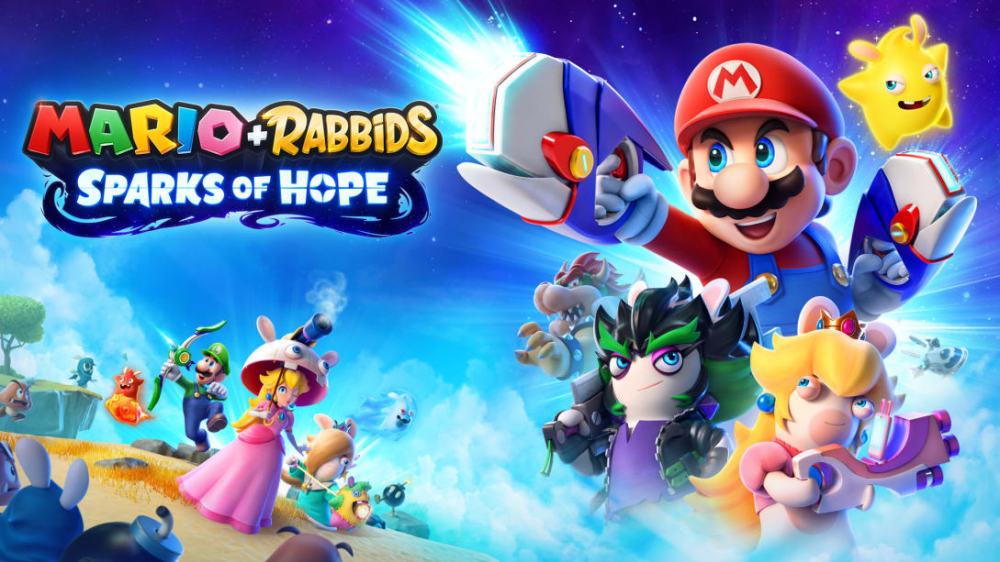