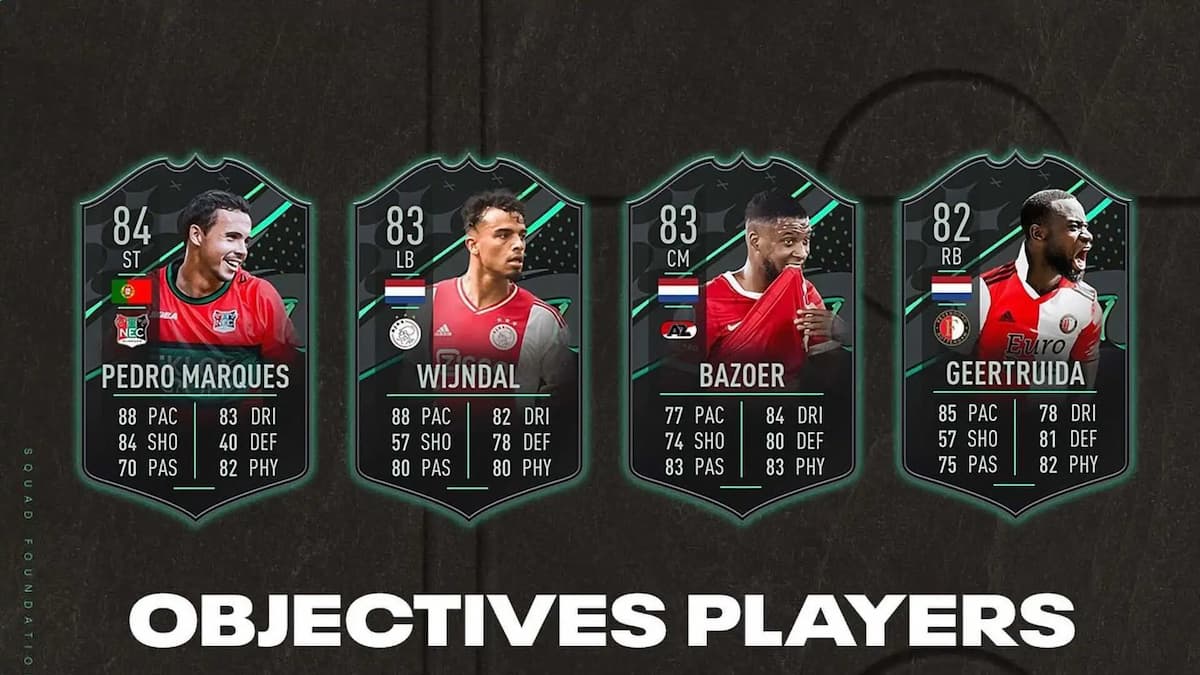 Ultimate Team never sleeps, with players bombarded by card promotions on a weekly basis. Squad Battles is another way to earn these specialty cards, so today we’re going to break down how to complete the Eredivisie Owen Wijndal Squad Foundations objectives in FIFA 23.

Usually players find themselves completing somewhat expensive SBCs or trying their pack luck in order to land these limited-time cards. Through objectives, things can be a little easier. As always, it depends on whether or not these cards are worth the grind.

After completing these four objectives, players will receive an 83-overall Owen Wijndal LB card. Not only that, but two of the objectives unlock a card as well—Feyenoord’s Lutsharel Geertruida, a right back, and AZ’s Riechedly Bazoer, a central midfielder.

Both fullbacks are pacey while offering a solid defensive base and Bazoer has plenty of important qualities that he’d bring to your midfield.

It takes a little bit of menu hopping to access, but it’s fairly straightforward. Simply go from Home > Objectives > Milestones > Squad Foundations: Eredivisie and you’re there. Then you’ll just need to check off each of the four objectives, which can be accomplished in any order.

Through the Netherlands [Reward: Lutsharel Geertruida]

All players need to do here is assist 7 goals using Through Balls in Squad Battles (or Rivals) with players from the Eredivisie on Semi-Pro difficulty or higher. The through ball pass works as follows:

It doesn’t get too much more complicated after this one, for what it’s worth.

This one becomes a little more involved, but only slightly. Players must score 10 goals using Eredivisie players with a Min. 4-star Weak Foot in Squad Battles (or Rivals) on Semi-Pro difficulty or higher.

Again, this may be the most involved of the objectives but it isn’t too difficult. The likes of Yilmaz (ST) and base Cody Gakpo (LW) both boast a four-star weak foot. That should be all the firepower up front you’ll need to bag 10 goals.

It’s much more self-explanatory from here on out. Players must play 20 Squad Battles (or Rivals) matches on Semi-Pro difficulty or higher while starting at least 7 Eredivisie players. It’s important to note that you do not have to win all 20 of these matches. The winning requirement comes next.

It’s also important to note that you do not have to keep all seven of said starters in your lineup for the duration of the match. You just have to start the match with them.

Keeping with the 7 Eredivisie players in the Starting XI, players must also win 10 Squad Battles (or Rivals) matches on Semi-Pro difficulty or higher.

Our suggestion? You do not require an elite Dutch side to accomplish these goals. If you wish to grind it out, we won’t stop you, but taking advantage of the Semi-Pro—or even Professional—difficulty setting should make it so you run into very few problems.

Arguably, checking off the weak foot requirement may be the most tedious, but all in all this is a relatively easy way to get a handful of solid Dutch-league cards. All you need to do is find the lineup that gives you that desired balance, plus there’s a good chance you’ve got some usable cards lying around already.

Now, that’s everything players need to know in order to complete the Eredivisie Owen Wijndal Squad Foundations objectives in FIFA 23. For more in-game tips, keep it right here on Twinfinite by checking out our other guides such as how to complete the Cody Gakpo POTM SBC and which 86+ players are the cheapest for SBCs—as well as endless information at the links below.