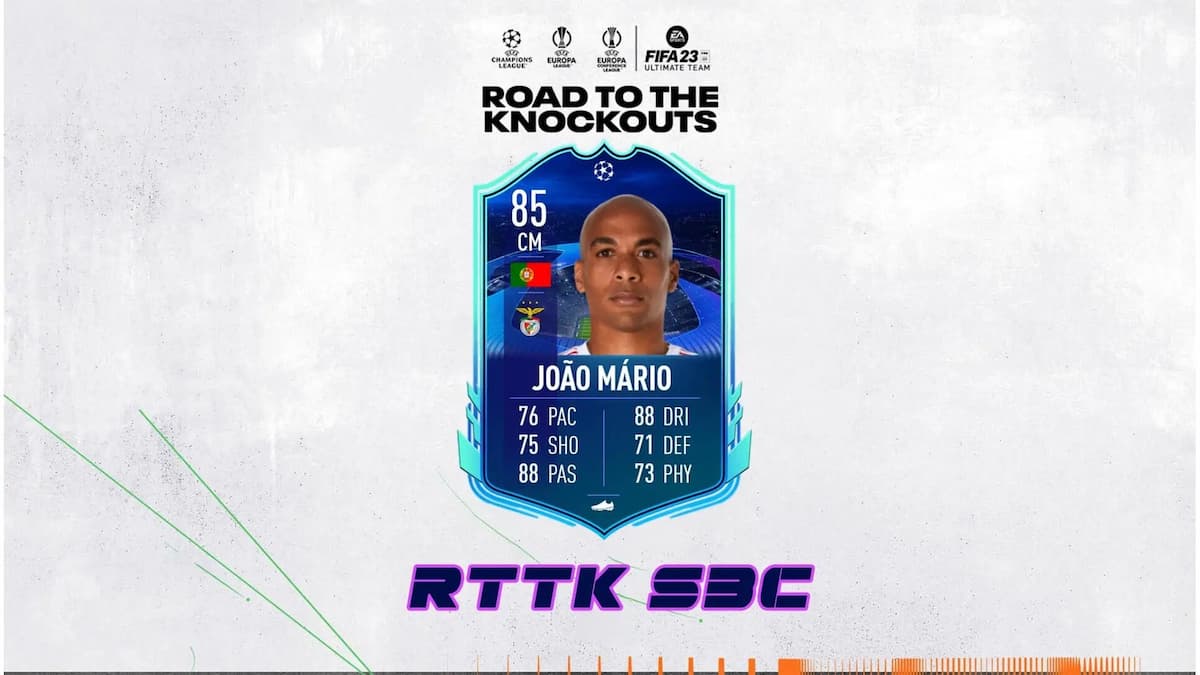 Card promotions start coming, and they do not stop coming in Ultimate Team, giving players plenty of chances to earn special, limited-time players for their squad—which brings us to why we’re here. In this guide, we’re going to break down how to complete the UCL RTTK João Mário SBC in FIFA 23.

We’ve had a couple of SBCs recently that required players to only complete one slate of objectives, such as Cody Gakpo and Sávio Moreira, but this time around players are given two slates. That said, these won’t be all that pricey depending on your need for a player like João Mário.

Below you will find your requirements, as well as the rewards you receive for completing them.

All told, these solutions may run you a combined 35,000 coins or so. Whether it be as a key bench player or if you’re looking to build a Portuguese-based squad, you could do a heckuva lot worse than an 85-rated João Mário at this price.

So without any further ado, let’s get into it.

This build is simple enough. There are several Portuguese players to choose from, but we were able to get away with sneaking in an 81-rated striker to tick that box. As things stand, players should have no problem filling out their squad for between 650-800 coins per position.

As always, be sure to constantly have your eyes on the transfer market. With more and more card promotion-based SBCs, there is bound to be fluctuation.

This build is a bit more expensive because of the 84-rated requirement. The TOTW player inclusion doesn’t help, but we suggest going for a player in the 83-overall range. That way, you’ll stick close to the 84-overall team requirement, and most of these will only run you roughly 10,000 coins anyway.

After that, there are several 84-overall players to be had for just shy of 2,000 coins. Zapata is a nice 83-overall option at roughly 800 coins. Aside from the TOTW inclusion, all these players can currently be had for under 1,900.

Of course, if you already have some TOTW fodder lying around, by all means, go ahead and use that. If you do have to buy one, though, a card like Ledesma is your best bet. A lot of 83-overall in-form cards can be had for 10,000-11,000 coins.

So that’s everything you need in order to complete the UCL RTTK João Mário SBC in FIFA 23. For more in-game tricks and tips, keep your eyes locked on Twinfinite by checking out other guides, such as how to complete the Kim Min-Jae POTM SBC and how to stepover right—as well as endless information at the links below.