You Suck At Parking on Xbox Series X

You Suck At Parking is very blunt with its title, and the game itself reflects that straightforwardness across its gameplay and structure. There is only one goal: park the car in the parking spot. There is no story, no cutscenes, and no characters. It is very simple in its focus, yet the goal can be difficult depending on what or how many obstacles are in your way to simply park a car.

The basic premise of the game is that the player is in control of a boxy sedan vehicle and you’re tasked with driving through these self-contained levels to park at parking spots, marked as a white rectangle with the letter ‘P.’ Sounds simple enough, right? The catch is: the car cannot reverse. Players can use the brake to slow down and stop, but overshooting the target will lead to awkward drifting to turn around.

The physics of the car are very loose, which makes it very easy to lose control. The car can gain speed quickly, and drifting is wide and sometimes unintentional. There is a constant feeling of both being in control and out of control within seconds, and you learn to love the brakes fast. The controls are thankfully very simple with acceleration and brake on the triggers, while respawning and restarting the level are mapped to the d-pad and Y button, respectively.

There are also other requirements that make these short levels tricky. Each level contains two to five parking spots, which will complete the level when a car is parked on all spots. There is also a time limit and a gas meter, so players cannot do infinite donuts when missing a spot. Fortunately, the game does not require players to perfectly align within the white rectangle, just simply have a wheel on the parking spot. This becomes generous in later levels when it is possible to park as a flaming wreck or giant ice cube.

The levels do ramp up in difficulty with various obstacles in the way with mines, giant fans, fiery barriers, traffic, portals, and literal police chases. One hit from a deadly obstacle will send the car back to the starting point, though the respawn button is handy if you careen off a cliff and want to save a few seconds.

The late levels mix up a bunch of these threats at once for a challenging time, but are very satisfying to overcome. Unless it is the towers that shoot fireballs in a spiral motion, turning it into a bullet hell that your car is frankly not equipped to handle gracefully.

Individual levels are grouped together as stages in an overworld setting, and you can skip levels if they’re too hard. Unlocking new sections requires a certain number of parking spots completed, so it is not a huge problem to not get every spot in a level. Although, parking in all spots within a level without dying will net a perfect rating, and those are required to unlock the harder mastery levels.

There are over 100 levels at launch, and the majority of these were challenging and enjoyable. How far you get in the game depends on how much you want to repeat levels to perfect them and gain access to mastery levels. There are also global and friend leaderboards to challenge yourself if you are into them.

There is also an online multiplayer mode where up to eight players all compete to park at the same time. I wasn’t able to check out the multiplayer functionality during the review period, but being able to play with friends absolutely sounds like a fun, chaotic mess.

There are not many flaws with You Suck At Parking due to its laser-like focus. The game ran extremely smooth on Xbox Series X and I only had one instance of glitchy roads. The graphics are colorful and clean enough that I never felt blindsided with the isometric view. There seems to be only one song, but it’s pleasant enough that it becomes mere background noise.

The overworld does becomes a bit cumbersome to travel back to previous levels, and I wish there was a simple level select without having to carefully drive everywhere. The reckless driving is fun in short doses, but not for long distances.

I was also surprised to see You Suck At Parking billing itself as a live service game, having seen very little of it before review. Cosmetics can be bought with real money, comes with a purchasable battle pass hilariously called the “Parking Pass,” and a roadmap can be accessed from the main menu with more content planned. The game is launching day one on Xbox Game Pass, so microtransactions and a clear roadmap before release are not that surprising.

You Suck At Parking is a quirky take on hardcore arcade games and platformers like Super Meat Boy that are built on frustration, but are addicting enough for one more run. The controls are somewhat satisfying and the challenge is enjoyable, but your skill level and dedication determines how deep into the game you get. Otherwise, it is fun for a few afternoons or an occasional session.

You Suck At Parking 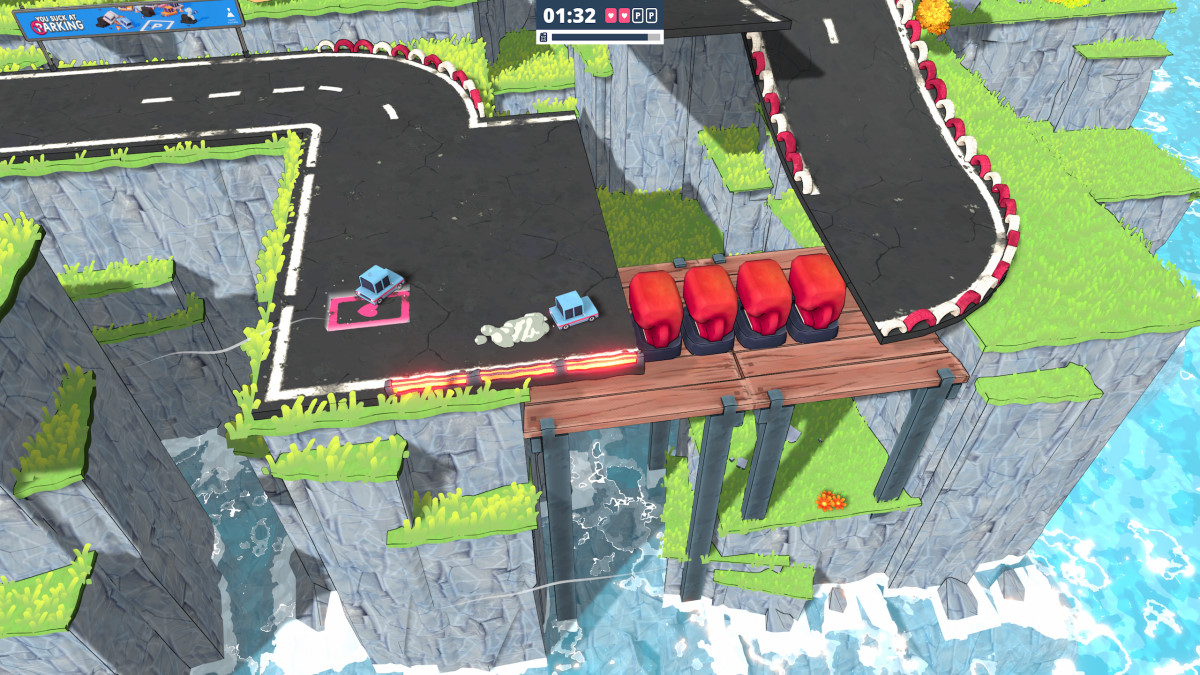